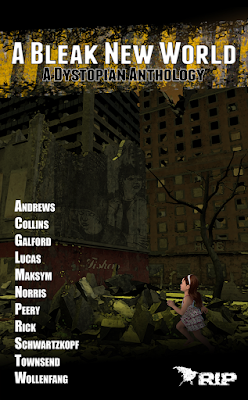 In June of 2014, I gave myself a much-needed permission slip to free write, the act of putting pen to paper to be transported wherever stylus and imagination chose to lead me. It turned out being more fun than I'd expected, and highly productive -- some ten stories, short and long, written over the course of almost two weeks. Among the completed story drafts was one titled "Third World", in which a young girl in a dystopian future society labors in a factory job to survive. I was deeply affected by the character's travails, and the bleak world into which she'd been born. There wasn't a whole lot of the usual prep work that goes into the creation of my writing, no story premise or outline jotted down on a note card, no dreaming up the starting or ending scenes. I simply sat on my sun porch with iced coffee and trusted the muse to get me from Points A to Z. And it was more fun than should be humanly possible.

Like the majority of the stories written during that marvelous spell -- a western, a SF tale, several horror efforts -- I later edited the draft of "Third World" for submission to publishers and sent it out the door. This particular tale went to the fine folks at Raven International Publishing, who were reading for a dystopian-themed anthology, A Bleak New World, where it was soon accepted. This week, the anthology debuts, offering dark glimpses into possible futures best avoided apart from visits to within the covers of this wonderful reading experience. Bleak is the brainchild of RIP head honcho Clark Chamberlain. As any familiar with Clark's fiction writing work, daily podcasts, or his stellar The Book Editor Show, Bleak's subject matter is a fair departure for the publisher's normally upbeat vibe. So why did he go the dystopian route for RIP's first multi-author anthology?


"I choose to be upbeat and positive. I have slogged through a lot of life, death of children, divorce, crises of faith, and then there was Iraq," says Clark, a former and still part-time soldier. "What I did there and what I was willing to do there really made me look at myself in a negative light. When I got home I was drifting, had thoughts about killing myself or at least going back to the war. Some of my persona is a mask to hide that darkness, or at least keep it down. I want peace so badly in this life because I've seen the darkness. I feel that we need to confront those emotions and feelings and really look hard at ourselves. Through story we have that opportunity. And on the business side, my then partner and I thought the sci-fi community would be a good place to dive in."

Aldous Huxley's Brave New World was the inspiration behind Bleak.

"I read that and thought this isn't much of a dystopia," Clark adds. "Being satisfied with your lot in life, that sounds pretty great. I'd much rather live there than 1984. So I wanted to see what others could come up with and I was pleasantly surprised."

Several of my fellow authors in A Bleak New World's Table of Contents shared the back-stories behind their stories.

Andrew J. Lucas on "Day Worker": "In recent years I’ve moved from frontline employee positions in call centers to management and supervisory positions.  This has given me a unique, well sort of unique, perspective on my workplace.  Being asked to mold the behaviour of employees or hire employees with a specific skillset has let me see how potentially interchangable any of us are.  In point of fact we are all just a set of skills, behaviours and responses to various stimuli.  Heck, my day job runs itself via a set of processes and protocols.  One of my peers made the offhand comment that you can’t teach good customer service skills but what If you could simply download them?  What would the world look like if you didn’t need to spend five years in university to become a doctor?  What would an employment agency look like in this ‘utopia’ where everyone was as skilled as everyone else when they wanted to be?  What if it all went wrong?"

Eileen Maksym on "Incarnation": "I majored in philosophy in college, and followed it up with a master's degree in theology.  One of the things that intrigued me in my studies was the mind-body problem. How much of what makes us ‘us’ is physical? How much of it is metaphysical, be it called a soul or a more hand-wavy consciousness? I would often confront friends (and acquaintances...and people at parties...) with this question: if you were to switch brains with a friend, which person is you and which is your friend? Or are two new people created in the melding of minds and bodies? My short story ‘Incarnation’ is a meditation on that question.  What happens when a mind is put into a new body, and that body's urges are diametric to the principles of that mind?  And in the end, it raises the inevitable question: how is that any different from the war between the mental and physical that goes on within so many (perhaps all) of us?"

Nemma Wollenfang on "GOD is in the Rain": "We all look forward to that bleak dystopian possibility and we all picture it in different ways. Some imagine it as a cataclysmic natural event, some lean towards a fatal clash of opposing military powers. Mostly violence and panic reign supreme and the remnants of humanity are lawless and brutal nomads. In ‘GOD is in the Rain’ I wanted to depict a future where the decline of humanity was not a sudden and violent occurrence but one that was slow and creeping and almost gentle, however ultimately destructive. One where the survivors could not afford brutality. The basic bones of the story had been rattling about in my head for a while, though I didn’t think of giving them flesh until being unintentionally prompted to by a reader of my online story. This individual has always been very encouraging and supportive of my writing… and just happened to have an almost identical username to my working title. It was fate, or perhaps divine providence. Simply seeing their name led me to sit down and type it out. So this one’s for you, reader. Thanks for the inspiration."

Sealey Andrews on "Touch Piece": "The idea for my story first took shape while watching an episode of Storage Wars where they discovered an antique medicine doll in a storage unit. I'd never heard of them before and was instantly intrigued. (If you don't know what they are, you can find out more here.) ‘Touch Piece’ is my envisioning of the aftermath faced by a world that's been devastated by rape culture. I wanted to play with the concept of technology progressing toward touch applications, while sexuality moved in the opposite direction -- hands off. I drew on tropes from classics like The Handmaid's Tale and A Clockwork Orange.  Blade Runner was my inspiration for the noir mood and atmosphere."

Josh Schwartzkopf on "Elysia": "Irony has a peculiar interest in our society.  It’s akin to standing in an elevator, waiting for the door to close when someone cries out, ‘Hold the door!’ instead you let it shut, snickering your way to the next floor -- and then the elevator breaks down.  There’s a morbid fascination with ironic situations.  I feel that was the basis of this story.  It’s ironic that these poor colonists have traveled millions of miles to reach a new home planet with a misspelled name only to find themselves living in the same squalor that they left behind on Old Earth.   Even more ironic they are being targeted by an invisible enemy who is killing them off one by one and they are powerless to stop it.  And the final irony, they are religious fanatics who despise technology and abhor artificial intelligence, so, of course, the only thing that can save them is that which they cannot abide.   I’m thrilled that this story has been included in A Bleak New World and through this experience (and Clark’s vote of confidence), I was inspired to flesh this story out into a full novel which I’m currently shopping around among various literary agents."

Chris Galford on "Clinging": "Tragedy is a staple of the apocalyptic. Not just tragic situations, but tragic characters forced into them. It makes sense for a world that is as unforgiving and unrelentingly dangerous as these visions of the future -- but what is more terrifying, more profoundly heartbreaking, than a character hiding from themselves? I have always danced with threats external and internal alike in my works, but it is the internal which most fascinates me -- the duel we all dance on a daily basis of us against our own minds. In my writing I have the tendency to take this to extremes, exploiting the fragility of the human psyche under fantastical situations. What better chance to explore the fight against the beast known as grief than when one also has killer robots nipping at their heels?"
Posted by Gregory L. Norris at 9:04 AM