I love creature features.  Creature double-features even more.  Along with giant rubber suit monsters of the Japanese variety, mummies have always ranked among my favorite things that creep, crawl, and create terror from the television set. Those desiccated former Pharaohs and doomed princes occupy a unique place in my heart, ever since my Uncle Jimmy and his pal Warren, tasked with babysitting me as a young boy, switched the dial to WLVI-Channel 56, and Boris Karloff's Imhotep dragged his dusty bandages across the snowy screen. Mummies trigger a unique brand of fear within me.  In high school, when I was just starting to write and tap into my imagination, I woke from a nightmare about being pursued by a mummy and jotted the dream down on a note card as a potential story idea. Not long after, I wrote it out and, these many years later, the tale, "That Which Must Be Confronted", still resides in my file system, and I vividly remember the raw nerves of the original dream, which translated onto the page.

Late last year, two friends planning to open a new press approached me about editing an anthology of short stories and asked me about ideas on a theme.  I instantly tossed out the notion of mummies -- the original zombies, and an icon that doesn't get nearly as much play.  I suggested a fresh approach from the expected Egyptian landscape: bog mummies, mummies from outer space, and also the all-important element of the jars in which organs were preserved and stored for future use by the embalmed upon their return from the dead. And thus, Canopic Jars: Tales of Mummies and Mummification was born, the first project by the fine folks at Great Old Ones Publishing. 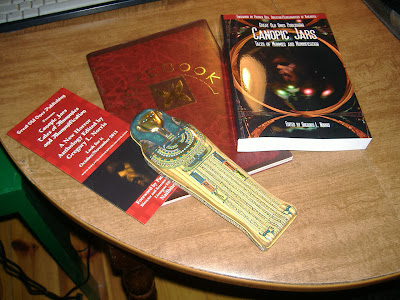 Over the course of the summer and into the early autumn, publishers Philip Perron (who runs the fantastic Dark Discussions Podcast) and Douglas Poirier invited writers they respected to submit stories for consideration.  I, too, sent out a handful of invitations, and was blown away by the brilliance and variety that resulted. Rejecting stories was difficult; accepting those that made it into the book, a whopping twenty-nine (including a reprint of H.P. Lovecraft's classic, "Under the Pyramids") proved fairly easy.  T. G. Arsenault unleashes evil on an unsuspecting town in "Symphony of the Ancient Gods".  David C. Hayes explores the history of the genre from an actor's POV in "That's a Wrap". Suzanne Robb's heartbreaking "Portraits of the Dead" tackles the loss of loved ones and the belief in their resurrection, the fundamental basis for Egyptian mummification.  The menu's unique in my tawdry tale set at a society party, "Mummy Chips", and Karen Dent embalms the entire Earth in the outstanding "Walking White Death". In addition to fantastic fiction that spans the globe from Egypt to Ireland, New York City penthouses to digs in remote China, from France to the far reaches of the cosmos, Canopic Jars also features poetry by Esther M. Leiper-Estabrooks and a foreword from Patrick Rhea, screenwriter and director behind Lionsgate's Nailbiter film. 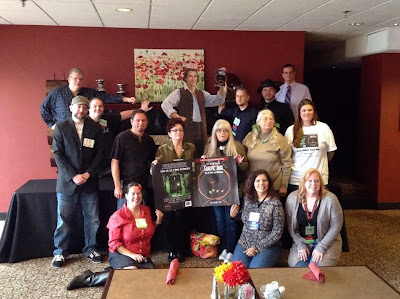 Canopic Jars went to press in record time and debuted at Anthocon in Portsmouth, New Hampshire, where fifteen of the anthology's contributors were in attendance.  Copies of the book flew off the Great Old Ones Publishing table in the dealer's room, and energy and excitement for the project was everywhere you turned.  A fantastic roster of authors, a beautiful layout (Egyptian hieroglyphs and ankhs detail the scene breaks and end pages), and a classic horror trope given a fresh dusting off, if you will, have resulted in a book I am supremely proud of.  Next up: Great Old Ones have asked me to edit their new anthology, based upon another idea I suggested: Bugs!
Posted by Gregory L. Norris at 10:43 AM 1 comment: