From the Bookshelf: LIFEFORCE by Annie Rodriguez 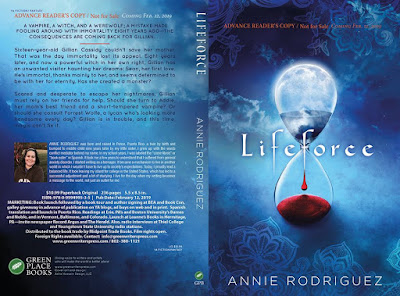 In early 2016, I returned to When Words Count Retreat Center for Writers and it was my absolute pleasure to meet talented novelist Annie Rodriguez. Annie's positive vibe and enthusiasm for writing was delightful. So, too were the pages of her novel-in-progress, a Young Adult Paranormal involving three medical professionals, each linked together through supernatural secrets. That novel, Lifeforce, instantly captivated me with its beautifully drawn characters, elegant prose, and engaging story line, mostly centered around young Gillian Cassidy whose mother, a powerful witch, died under mysterious circumstances. Gillian has been on the run from an abusive boyfriend with a dark secret of his own  and harbors a burning attraction to Doctor Forrest Wolfe, a shapeshifter and one of the young witch's two guardians. The other, trauma surgeon Addie Brystol, was transformed into a vampire during overseas. So it was no surprise to me when Annie announced the book had been accepted for publication.

It was my pleasure to speak with the author about her excellent novel and future plans.

I adore your novel, your characters, and their plight. Where did the idea for Lifeforce originate?
First of all, thank you, I hold your opinion in very high regard.  I have always wanted to write a novel, ever since I was in fifth grade. I always thought of having some fantastical element in it (a princess in distress was the first character I developed at ten-years-old, inspired by the Disney version of fairytales like Sleeping Beauty).  To me, reality has always been a little too harsh, and I long to escape from it during my writing time. First as a teacher’s pet and general school nerd (and proud!) and now because of the fields I work in-I find myself that after the events I have witnessed as an anthropologist, public  health professional, and a now a law student, I need a breather, and I find that in my writing, and fantasy characters are a great part of that world.  I also long for my readers to experience a similar breather in my works.  But I also want to inject a real-life spin into it.  It seems counterintuitive but I hear people all the time wishing that they had one thing or another, thoroughly convinced that if they had that one thing, it would solve all their problems.  Those things frequently will take the form of a superpower (ie: Flash’s speed or the ability to transport themselves by appearing in and out of a stall, etc.) I have been guilty of that too.  Many times, I have wished to travel back to the past and do something I wish I had done or stop myself from doing something I wish I had not done. And this theme is very prevalent in my novel, with its main character, Gillian, fighting with the past and the future constantly.   Yet, our mistakes and actions are what help define us and I wish for people to see, through my novel, that even if you had something that is supposed to give you some kind of advantage over everyone else that does not have it (ie: magic in Gillian’s case and immortality on the other two cases), it still has to be nurtured, looked after, and it is a big responsibility.  What I want them to come out of the novel with is that maybe grass is greener on the other side because you water and fertilize it.

If you could cast Gillian, Forrest, et al for the movie, who would play your leads?
Amanda Seyfried as Gillian Cassidy, Jesse Spencer as Forrest Wolfe, Kate Beckinsale as Addie Brystol, William Estes as Sean Kennard, Josh Harnett as Josh Ambrose, and Hillary Swank as Bridget Martin Cassidy. 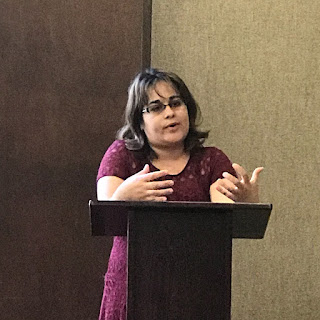 Is there a sequel in the works?
Yes…and that’s all you’ll get for now.  Oh, I’m very pleased with how it’s taking form…but no more!!

Talk about your writing process – schedule, organization, anything that gives us insight into Annie Rodriguez.
I used to be a morning person mostly, until law school started.  I loved to write from 7 a.m. to 9 a.m. my first summer of grad school. But school and work plus caring for house, mother, and cats make that almost impossible.  I find myself more productive taking breaks in between reading cases or waiting in class or court-I always carry a notebook with me and make the most of the time I can take.  I think also once you’ve penned your first story, you’re more comfortable with yourself and your characters.  I just let them speak through my hands.  All I have to do is put pen to paper or hands to keyboard, and it is almost an autopilot process, one that makes me feel mentally clearheaded and relaxed. My supervising attorney this summer was aware of my breaks and has already said to me in the two months we’ve worked together “You stop writing, I’ll start worrying.” So it’s a great stress reliever.  I cannot specifically schedule a break with my current workload, and probably will always be difficult given my career choices, but it makes the break that much more fun when it does happen. And I always manage to make my deadlines…so it’s working!

What are you presently writing?
The sequel! Tentatively called Immortality’s Peril.  Plus I am attempting two other stories that talk about channeling magical powers through objects.  Who knows - I may have three completely new novels here.
Posted by Gregory L. Norris at 10:39 AM 2 comments: