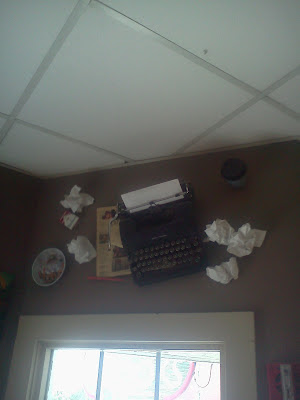 One of the hallmarks for which I'll remember 2012 has been the retaking of surrendered territory, both in the physical and virtual senses.  I've returned to places I enjoyed in the past, like Camp NECon (what a wonderful writer's conference!); have published with former and now current companies (my latest novel, The Duke and the Deadbeat a recent example); and I've found my way once more to the magical destinations that existed before my world went spinning out of orbit in 2010.  With orbital reference points reestablished and the world back on its proper axis in 2012, two weeks ago I voyaged to one of those places that has haunted me since my first visit, Crackskulls Cafe in Newmarket, New Hampshire.

I did a reading as part of the All Things Outloud performance held there in August of 2009, and instantly fell in love with the used bookstore/homemade ice cream stand/literary venue.  That night, three years and untold light years behind me, I read the opening to my long short story, "Wine and Spirits: A Tale of Substance Abuse and the Supernatural" (which would be published on its first foray out in the beautiful collection of hard-boiled horror tales, Darker Than Noir).  The insanely awesome decor, such as the art instillation above -- an antique typewriter suspended on the wall with appropriate literary accoutrements -- connected with my psyche in indelible strokes. A version of the cafe (which also serves incredible fair-trade coffee and homemade bagels) appears in Duke as The Dewey Decibel.  Earlier that same night, I started a short mystery, "The Thief of Markham Square," camped on one of the comfortable padded benches, with my iced coffee and a commitment to bring home some of their fantastic ice cream.  I also left with thoughts of the used musical instruments, shelves of books, and upbeat, creative vibe, longing to return. 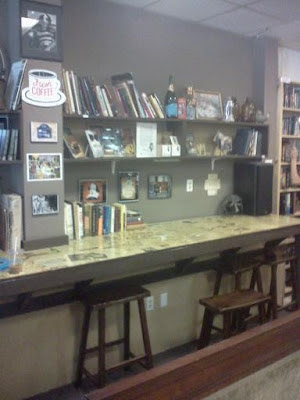 On Sunday, August 12 I returned to Crackskulls with two of my good writer's group pals, my new laptop (the cafe also offers free WiFi to customers), and the longhand, as-yet-incomplete draft of "The Thief of Markham Square" for a day of writing.  New additions to the space include a decoupaged work bench with ancient newsprint beneath glass, pictured left. The benches and tables were as comfortable as I recalled from my previous visit. Within an hour of ordering my tall, fine iced coffee (I'd down two more by the time we departed), I wrote a new short story, "In the Relationship," to conclusion and put another thousand words on the mystery.  I watched episodes of my beloved Space:1999 on my laptop (the following morning, inspired to the Nth, I would begin my 1999 novel, Metamorphosis, my 1000th work of fiction). Wandering through the stacks, I found a copy of Marcia Golub's hilarious and brilliant I'd Rather Be Writing, a nugget of gold that I instantly snagged. And my good friends, Douglas Poirier and Philip Perron had similarly productive results.

If I lived closer, Crackskulls Cafe is the wonderful sort of place where I would write my days away, an iced coffee on the table beside my laptop, notepad, and fountain pen.  But on this other side of 2010, returning there filled me with energy and inspiration, that one visit was almost like coming home. I can't wait to go back!
Posted by Gregory L. Norris at 8:21 AM 6 comments: 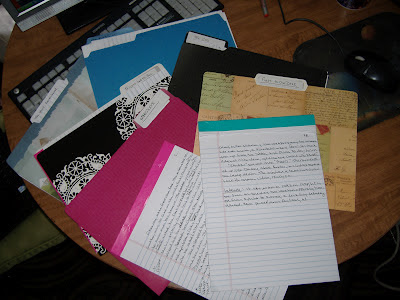 Yesterday, I completed my 981st work of fiction, a short story of roughly 3,000 words that will launch to a regular editor for consideration in his newest print anthology for Cleis Press.  The charge toward my 1,000th is back on track after several weeks of literary split personality disorder in which I've felt a bit like Victoria Lord, the dignified and long-suffering heroine from my late, lamented soap, One Life to Live. Played by the amazing Erika Slezak, Victoria's gray matter housed Viki, Niki Smith, Princess, Tommy, Tori, and the frigid Jean Randolph among her multiple personalities; my literary version of Disassociative Identity Disorder, also known as my Works-in-Progress, could give Victoria Lord a run for the money.

My current W-i-P list contains two mysteries, a police proceedural, a Lovecraftian horror/fairy tale mashup, two memoirs (one that has swelled to seventy-eight pages), the usual unclassifiables, M/F and M/M romance, creature-feature monster tales, and the Big 1,000 itself, my Space:1999 novel, Metamorphosis.  All of my significant landmark stories -- #1, 50, 100, 500, 600, 700, 800, and 900 -- have been 1999 or other fan fiction efforts, written mostly for my own enjoyment (#900 was a loving and hilarious nod to Lost in Space whose story I dreamed in 1982; I read the novella, "Lost and Found," start to finish in May of 2011 to my then-writer's group, who seemed to dig it -- I sure did!).  Big 1,000 is bigger not only in terms of the number, a significant event I've anticipated since my teenage years, but also for its importance: my goal is to use Metamorphosis as a writing sample for both the publishers of the Space:1999 novels and Jace Hall, who I'll meet next month in Los Angeles.  Hall was executive producer on ABC's recent V reboot, and is shopping around an update on my beloved science fiction classic, repackaged as Space:2099.

But a few weeks ago, nearing the home stretch, I got into something of a marathon runner's nightmare, fingers and projects tangling together in lieu of legs. My Muse, who runs a fairly tidy and organized operation in my little home office Writing Room, inspired my pen in a dozen different directions.  These tentacles, attached to so many different writing projects, upset the normal balance of order, unleashing rare chaos that left me struggling to focus.  One of the memoirs had stalled on Page 16, and everything log-jammed behind it. Folders of half-completed drafts stacked up.  The Muse, who is constantly presenting me with fresh ideas, either refused to acknowledge his horse in the race was stumbling behind or didn't get the memo.  Luckily, on a bright Wednesday night camped out at my weekly writer's group, he got hip.  I wrote through the log-jam and forward momentum resumed.  Many of those half-completed manuscript drafts were dashed off to completion, creating inventory for when my regular editors ask me to contribute to new projects.  Quite a few remain yet as partials and howl in the night for me to finish them, but their numbers no longer seem so daunting.  And, through a couple of false starts, Metamorphosis is now on track.

It's been a long time since I stared at a blank white page without the slightest idea of what to write.  But in the not too distant future, Muse willing, I'll shortly hold the completed longhand draft of my 1,000th work of fiction, and then it will be on to the next millenial mark.
Posted by Gregory L. Norris at 9:40 AM 3 comments: 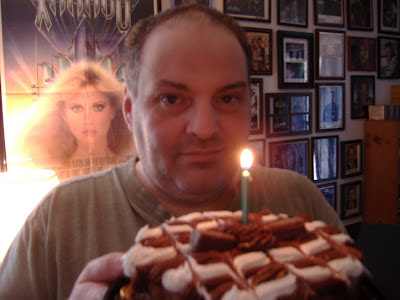 I don't have a lot of great birthday memories from growing up -- those have all come within the last few years. But one that does stand out involves the best chocolate coconut cake with a cherry on top, enjoyed within that magical cottage near the Big Woods in Windham, New Hampshire.  I might have been six or seven.

A year ago, I put my fingers to this keyboard and took what seemed a very bold step.  For all my love of space opera and science fiction, I resisted a Web-based presence (read: kicking and screaming) until I realized it was an area of my career I could -- and must! -- improve upon.  On August 11, 2011 I launched this little blog about my writing adventures, have only advertised it on Facebook and infrequently on a handful of publisher forums, and voila: one year later, it boasts nearly 15,000 hits (even more shocking, I joined FB a month later and have nearly a thousand FB Friends, many of them celebrities from my beloved soaps One Life to Live, General Hospital, and All My Children; numerous of the best designers on Project Runway, a Top Chef or two, various celeb writers like Jane Yolen, Ben Bova, and Peter Straub, actors from Star Trek: Enterprise, a series I pitched to for three years, and Star Trek: Deep Space Nine).

So to you, dear Bloggy, through which I have opened up my insular little writing world to the vast universe at large, I wish you chocolate coconut cake with a cherry on top for being the wondrous present I didn't think I wanted.  These past fifty-eight posts have been my pleasure to create, and I couldn't imagine not having you there for the next five hundred.  Happy birthday!
Posted by Gregory L. Norris at 7:47 AM 1 comment: