Summer Lovin' -- Had Me A Blast

On a balmy August night in 1980, I exited the rear doors of the long-gone Salem Tri-Cinema and my life was forever changed. I'd just taken in the movie Xanadu with my circle of high school friends and was so inspired by the flick's theme -- that our dreams are worth pursuing if we have the backbone to try -- that my life was forever changed. An enormous full moon lit the sky. The air was sweet and intoxicating. As we negotiated the rear of the cinema and ambled toward the parking lot, I had that Eureka! moment: I loved to write, and I was going to be a writer, both end of story and the beginning. Thirty-five years later (twenty-five of them as a published writer), and especially now that I've gotten so unthinkably older, I've come to appreciate the summer months both for the warmth and also for keeping me young at heart. Soon, it will be winter, and I'll be negotiating around the house like something out of Toulouse Lautrec.

This summer actually kicked off early with a spell of gorgeous sunny weather at the start of April that ran for a full week. During that time, I finished a first draft of my M/M high fantasy novel, Kingdoms Be Damned, seated outside on the sun porch. As winter waned, one night while cooking dinner I challenged myself to come up with my own genre. What I created was "Sweat Punk" -- a futuristic storyline in which humans had willingly sold off soul for technology and longed to reclaim what they'd renounced. In late April, I put pen to page and began work on a novella, Sweat Punk: A Love Story. I was instantly sucked into the world I'd created and specifically the love between my two leads. For months while working on the story in the background, I found myself walking about in a daze, eager to return to them and their seemingly-impossible situation. I wrapped the first draft in early July. Like Kingdoms, I soon plan to begin computer edits on the project for submission.

In May, I hit the Big 5-0. One of my fondest goals for my fiftieth year on Spaceship Earth was to write my Space:1999 novel Metamorphosis. I put pen to page on my birthday and, like Sweat Punk: A Love Story, wrote it in the background, throughout the summer. The experience was so uplifting, so ridiculously fun, as I drew the courageous men and women of Moonbase Alpha into the biggest space battle in the history of the universe. I began reading the novel at writers' group meetings and, on those nights, was a kid again. 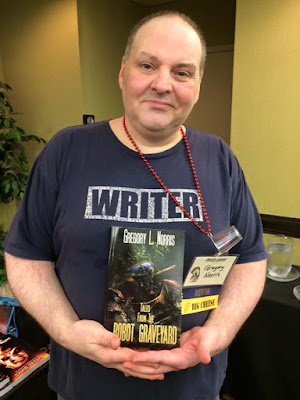 In early June, I headed to the fourth Anthocon, a world-class conference held in Portsmouth, New Hampshire. Anthocon saw the launch of several anthologies containing my short stories, including the stellar Dreamscapes into Darkness, where my tale "One More" is cozied up against a reprint by D. H. Lawrence, and From the Corner of Your Eye: A Cryptids Anthology. Most exciting was the release of my new book, Tales From the Robot Graveyard, which sold out within two hours of my arrival to the dealer's room. I managed to escape from Anthocon with one copy, signed the rest (along with a plethora of other anthologies), and gave two open mic readings. My two writers' groups -- Berlin Writers' Group here in the north and Nashua Writers' Group from the south -- were well represented, and over a dozen of us lunched together at the classic diner attached to the hotel next door, sight of the original con.

Most of my summer days began with iced coffee and blueberry bubble water in my Writing Room, but soon transitioned to the sun porch, my summer de facto home office. There, bookended by cats, I wrote a new horror-themed screenplay on spec, numerous short stories, and, during the first half of July, half of a new novel, which I plan to complete next month during National Novel Writing Month. I found myself besieged by new ideas from every direction -- while taking in the Chris Pratt event movie Jurassic World with friends on a sunny summer Sunday afternoon, three ideas latched onto me, leaving me scrambling for pen and paper (despite having an excellent memory for details, I still don't trust my brain enough to recall everything).  I sold numerous short stories in a multitude of genres to various magazines and anthologies, and enjoyed the long, laid back (but hardly lazy) days.

On September the third, we paid off our mortgage on our house, Xanadu -- lovingly named after that movie from my formative youth, a place where dreams come true. As I write this report on my summer adventures, a cold wind is blowing down from the mountains, knocking leaves from trees, a clear promise of winter. My plan for the cold months is to do what I did throughout the warm: live, write, and dream. And among those winter dreams, surely, will be ones concerning a return of the greenery outside, the balmy summer breezes, and the upsurge of passion I always experience when the days grow longer and brighter.
Posted by Gregory L. Norris at 8:07 AM