How I Spent My Summer Stay-cation

I've learned that in this part of the globe, summer usually means three short, hot months bookended by two warmish months, while the rest of the year belongs to winter.  It seems to me that we just came out of a very long, very cold winter when -30 degrees wasn't uncommon, and most of the time the thermometer hovered close to 0, and that the lovely, lush green realm that surrounds our house only just arrived. But the truth according to the calendar is that today is the last day of August. I blinked, and summer was gone.

The one big thing I have to show for the time is a lot of completed writing.  Finished first drafts in desperate need of filing have piled up atop one of my two big lateral drawer cabinets, and with summer unofficially over in a few short hours, my plan for the first week of unofficial autumn is to get those stories filed.  Back in June (was it really that long ago?), on the first hot day I remember, I started a wonderful week of free writing, something I've done too little of, and the results were tremendous.  Several of the stories I produced during that time have since found homes.  The same week, an interview I gave to the fine folks at Grey Matter Press came out -- it can be read in its entirely here.  I also learned that my ghostly historical short story "Drowning" is set to appear in their forthcoming anthology Death's Realm, one of only seventeen accepted from over 2,000 submissions!

Many of my summer days started in my Writing Room, a place I love, and ended on the old sofa on our sun porch, with its beautiful views out six tall windows.  I am seated there as I write this, looking out two at the fiery red maple leaves of a tree in the neighbor's backyard, already showing the first color before September's arrival.  Out here, while penning westerns, mysteries, a long detective story, M/M romance, writing about robots and things that go bump in the night, I sipped copious amounts of iced coffee from tall, sweating plastic cups, as well as a brand of blueberry bubble water I discovered at the local grocery store in July.  I submitted to numerous markets, and a lot of my babies came home with contracts in hand.  In the thick of so many completed projects, I also wrote a screenplay, my second for the indie Hollywood filmmaker who filmed the first bearing my byline in June.  That first feature film is presently being color-corrected and edited for sound out in Tinseltown, and there are rumors of an autumn screening in the not-too-distant future.

As stated, Robots were a big part of my summer.  They have, in fact, been a prevalent theme since my boyhood, when iconic mechanical men like the Robinson Robot from Lost in Space and other 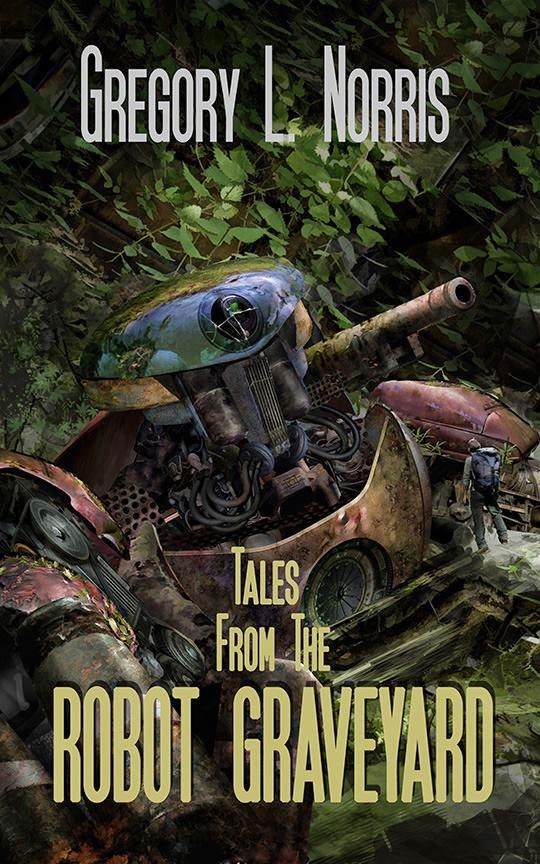 favorite TV shows forever influenced both my life and my pen. The release of my collection of three novellas, Tales From the Robot Graveyard, is another event I look forward to in the fall.  In my book, which boasts an amazing cover by Eric Chu, conceptual artist on the new Battlestar Galactica:


·                Two brothers—one human, the other manufactured—test the limits of family loyalty in a dead city that harbors diabolical secrets in “Ghosts and Robots”.
·                 Mad technology decimated the Earth.  Could an even madder one save it when mechanical emissaries arrive bearing gifts in “Robot Kind”?
·                 And in “The Long Frost”, on a planet of ice, somewhere between man and machine, lies one last desperate hope for survival.

In addition to the bling from Eric Chu, the book will feature a blurb from Amy Howard Wilson of Star Blazers fame, and an inaugural poem from my good friend, poet Esther M. Leiper-Estabrooks.  I'm beyond excited to see the book's release and have had so much fun writing the tales, one of which ("The Long Frost") dates back almost to the beginning of my writing dreams.

August was a delightful month, with not one but two Sunday writers' group parties/cookouts, and numerous weekend guests (in part to enjoy Yard Sale, the newest play written, directed, and produced by my friend and fellow writers' group member, Jonathan Dubey).  On the 1st, we spent a day beyond the notches in the town of North Conway, eating Chinese buffet for lunch, shopping for office supplies -- I picked up some great composition notebooks, which I've since used voraciously for my summer literary adventures -- and taking in the first showing of Guardians of the Galaxy, which we all loved.

For the second summer in a row, we made due without the need for air conditioning.  Our house boasts lots of windows and four ceiling fans (one in my Writing Room), and the two box fans more than made up for days and nights when the temperature soared into the upper 80s (not once did we pass into the 90s). The smells of summer -- roses from the giant Lovecraftian menace in the backyard, newly mowed lawn, the green veldt that surrounds Xanadu, our home on the hill -- were welcome, and in abundance. There was even a bear sighting in late June, when a curious hulkster moseyed down from the woods behind our home in search of picnic baskets and, sensing we keep our garbage in the small shed attached to the back of the house, just beyond the far wall of my Writing Room, employed brutish strength to snap off the latch.  It was all very exciting and, no doubt, fodder for my future stories.

I'm sad to see the summer end. Forget the insane cost of heating oil that looms not far down the road, the oppressive cold that is surely coming, the short, gray days that define winters in the North Country.  I'm going to miss sitting out in the cozy, sunlit warmth of my other office, where so many of the season's stories were composed -- the short, long, and screenplay alike.  I loved the heat, what there was of it, and the green, and the occasional Sunday afternoon writing with the Red Sox game playing on the flat-screen. But winter has its own charm, too, and I look forward to the work I'll be doing nestled in my beautiful Writing Room with the cube heater on.  And first, there's autumn to enjoy, brief as it surely will be, with all those crisp days, falling leaves, and the mysteries of Halloween to enjoy and write about!
Posted by Gregory L. Norris at 11:08 AM No comments: