Last September, during a rare afternoon nap, I dreamed about a planet in the late stages of terraformation. Most of Hawthorne's Planet belonged to its human colonists -- all save a lush area, the Valley of the Falls, where indigenous giants drowsed. These gentle salamander-like behemoths, seven in all, had been sedentary for so long that forests had grown upon their spines, and the courses of certain waterfalls diverted around them. In the dream, school children in a nearby colony had named the giants after the dwarfs in a classic cartoon.

At center stage in this odd dream was a military man tasked with carrying out the destruction of the giants, so that human interests in the valley could attend to claiming that last vestige of territory. I sensed the war being waged within this man -- what he and his forces were about to carry out was wrong. Just how wrong soon revealed itself as soon as the first shot was fired, with devastating results. Then I roused from sleep, the story but not the ending clear. I ambled down to my writing room and jotted down the bones of the idea, along with its title -- "Mandered", which had also come to me in the dream. I wasn't even sure 'mandered' was a word (turns out, it is -- an old world term meaning to command or summon). As 2015 ran into the fall and then late fall and I went on an end-of-the-year tear, writing twelve short stories over the course of fourteen days, I pulled out the note card for "Mandered" and wrote it fairly as the dream played out, hitting what seemed the perfect note for the ending -- after destroying the world, the military man would have to dream and help fix it. Once done, I judged this story as good, put the next draft onto the computer, edited it through three more drafts, and happily submitted it to the Roswell Awards in Short SF Writing. On April 7, five days after returning from my writing retreat to When Words Count in Vermont, I woke to learn that "Mandered" had won Honorable Mention in the prestigious award for excellence in short Science Fiction writing.

Please understand that this was, to me, like winning the Oscar, Emmy, and Golden Globe all wrapped up in one, and I had to reread the wonderful email from award organizer Rosalind Helfand numerous times. In fact, as I recall, I spent that entire Thursday levitating above the floor! I'd been saying since hitting the 'send' button last December that if one of the four stories I submitted placed, I would recant my stand on flying and travel back to Tinseltown to attend the awards. The universe listened, and some six weeks later, I was on my way west. I booked a flight from Manchester, New Hampshire to LAX, via a long layover in Charlotte, North Carolina. How long wouldn't manifest until a pop-up thunderstorm with spectacular lightning shut down flights, and backed everything up by hours. After eleven p.m. EST, I finally boarded my flight to Los Angeles. I'd packed ridiculously light -- my Italian leather valise with stories to work on (which got me through the bulk of my layover), a tote with clothes and my toiletry bag, which made boarding and deplaning far easier. Almost six hours later, I stepped off the plane and into the first taxi waiting in line outside the famous airport. My driver, a delightful Russian chap named Yuri, asked me which route I wanted to take to my hotel in Hollywood. Following my long day of travel, I answered, "Whichever's fastest." At one point, my bleary eyes glanced at the speedometer to see we were traveling at 92 miles-per-hour down the freeway.

I arrived in Hollywood super early and checked into the same hotel where I stayed during an eleven-day visit to the set covering the finale of Star Trek: Voyager for numerous national publications. The place was as decent as I recalled, the room beyond clean and inviting (if a tad outdated -- I thought I'd stepped into the funkadelic 1970s, given all the burnt orange and somber brown). Despite my exhaustion, I woke at six, L.A. time, showered, and spent a few hours writing on the oddly fabulous desk and bench in a corner of my room. Brunch with a writer friend at a Grub Restaurant, a visit to Xanadu, and then I returned to get ready for the event.

The Roswells, an extension of Sci-Fest L.A., in which plays by such greats as Ray Bradbury, Clive Barker, and Neil Gaiman are staged, is doubly amazing in that classic SF actors perform the winning entries. I was beyond blown away by this year's luminaries, which included Dee Wallace who, in addition to her celebrated film career, had performed last summer as "Pat Spencer" -- Luke's sister -- on my beloved, sole remaining soap, General Hospital. At the pre-ceremony mixer held at Amalfi's Restaurant next door to the Acme Theater, venue of the awards, we were introduced. "It's Pat Spencer!" I exclaimed. A fan boy? Guilty. And speaking of which, my husband-to-be and I were huge fans of Fringe and never missed an episode, so when I met the lovely Jasika Nichole, "Astrid" on the series, I forgot that I no longer get star struck after having interviewed, met, and interacted with so many of my favorite actors. On stage, we hugged and kissed -- and after telling her about Bruce's and my fondness for the show, she sent me home with a hug and a kiss for him as well. The ceremony was incredible, with brilliant performances (Dee Wallace, the epitome of class, nearly pushed me to tears). After, the winner was announced and all of the recipients present were welcomed onto the stage for photographs and to mingle with the stars. 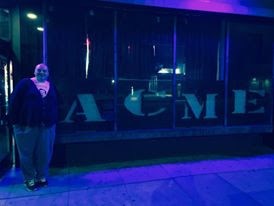 When I began making my plans for a West Coast trip, I invited my dear friend (and celebrity!), Marianna Cooper to join me as my plus-one at the ceremony. I met Mari in 2013 at When Words Count and wanted to see her following her move to the land of sunshine. Bumper to bumper traffic made our reunion before the show brief, but we caught up on the cab ride to Amalfi's, and it is to my dear friend that I owe all of these wonderful photographs. We enjoyed the ceremony, and then Mari joined me on stage with the actors, and I remember thinking, exhausted and excited as I was, that every writer should know this level of recognition for their work. One of the judges told me that they were inundated with submissions, and that it truly was a job of separating wheat from chafe. "Thank you for being wheat," she said. I loved that.

I bid Mari goodnight, returned to my room, and crawled into bed. A few hours later, worried over missing my early flight home, I tore back the covers and gathered my few things.

LAX before sunrise. Chicago in the afternoon. By dinner time, EST, I was back in New Hampshire, and traveling the three hours north by car toward home. I returned exhausted -- while traveling to Hollywood and back, I managed some six hours of sleep in my hotel, spread over two nights. Somewhere over the contiguous United States, my tailbone evaporated, and it took me the better part of a week's worth of naps to catch up so that I no longer felt like a zombie. But I reminded myself what that nap in September of 2015 earned me, and any time I found myself feeling depleted, I only needed to mosey into my Writing Room to see the beautiful new writing award in its silver frame to re-energize. I am so proud of what my little cautionary short story has accomplished! This was an adventure of a lifetime!
Posted by Gregory L. Norris at 12:11 PM 1 comment: