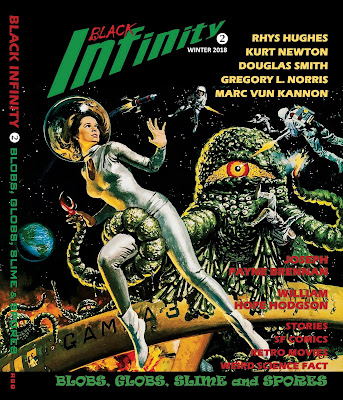 I've often spoken of my childhood spent in an enchanted cottage located between deep woods and vast lake, and of the healthy diet of creature double features and classic SF television I grew up on. Last summer, I sold the first of several short stories and novellas to Black Infinity, published by the fine folks at Dead Letter Press. "The Tree Surgeon" -- which I'd penned during my unforgettable time at Christine Woodside's Writing From Nature retreat and workshop -- is an homage to my late, great grandfather, Wallace Runge. In my youth, my mother regaled me with amazing stories that fed my young imagination, including the fact that Grampy Wally had been a tree surgeon in his earlier years. I doubt he ever encountered a tree anything like the one my main character does; I sent out the story and it was accepted on its maiden voyage into Black Infinity 2's special "Blobs, Globs, Slime and Spores" issue by publisher Tom English. Contributor copies arrived on a recent snowy Friday afternoon, and they were, frankly, stunning, the oversize pages filled with classic reprints, stories by new master writers like the brilliant Kurt Newton, comics, movie reviews, and a foreword by English referencing some of my all-time favorite TV series and movies: Space:1999, Lost in Space, and the ultra-creepiest of creature features, Attack of the Mushroom People -- when that film ran on Saturday afternoons, I refused to go outside afterward, too terrified to consider playing in those green forest wilds.

Reading an issue of Black Infinity is like a trip through time back to my boyhood; to bigger worlds and universes. It was my pleasure to sit down with publisher Tom English to discuss the publication, and the deep love behind its production.

Talk about the 'vibe' if you would -- the wonderful retro tone of BLACK INFINITY and your own taste regarding a time when, even if it was dark, SF was fun.
Well, I grew up in the late sixties and early seventies -- a wonderful time, I think, for TV, comics, and old SF magazines. The Silver Age of comics was coming to an end, but the local thrift stores were stocked with back issues of books originally published in the 50s. Kids were able to pick up old copies of Mystery in Space, Amazing Fantasy and, occasionally, EC’s Weird Science. There were also plenty of dog-eared copies of old SF digests, like Astounding SF, Fantastic, and Imaginative Tales, to name a few. That’s what I was reading. Meanwhile, broadcast TV was awash with the first waves of syndication of some classic (and groundbreaking) SF shows, namely The Twilight Zone and The Outer Limits. And on weeknights Chiller Theater (or some variation) was airing movies such as Howard Hawks’ The Thing From Another World and It Came From Outer Space. For the most part, all these movies, shows, comics and books shared common themes: alien worlds aren’t always welcoming, science isn’t always your friend, and space can hold its share of horrors. This is the kind of stuff that hooked me as a kid. After all, who doesn’t enjoy a good haunted house story, for example? Or the creepy SF equivalent, a creepy derelict spaceship? But the SF genre was shifting. Space travel, as depicted in movies and TV, was becoming routine and a little dull; science always had the right answers; and aliens were just misunderstood. Okay, there’s nothing wrong with this overly optimistic take. I’m certainly not a doom-and-gloom guy, but I missed the sense of foreboding, the moody eeriness, and ... the monstrous creatures. I think the genre is returning to much of this. I think movies like the original Alien and John Carpenter’s The Thing started this return. But I wanted to do a magazine that fully embraced this type of SF, and which celebrated all the comics and movies and books and shows that helped shape spooky SF. Hence, the birth of Black Infinity, an idea I’ve had for almost a decade. Issue #1 explores the most obvious theme: Deadly Planets. Issue #2 features “Blobs, Globs, Slime and Spores” (which frequently menace humankind in SF). For each issue I tried to pull together the classic stories featuring the theme or element, added fresh takes by some of today’s best writers, threw in columns on weird science and retro movie reviews, and tied everything together with an introductory overview of each theme. Oh yeah, and lots of movie photos and illustrations. Is Black Infinity for everyone? I seriously doubt it. Does everybody like everything? But my hope is that, for those of us who fondly remember 1950s Sci-fi movies and stories, Black Infinity will be a lazy Saturday afternoon must-read.

Can you share themes for upcoming issues, and also the fantastic classic tales you'll be reprinting?
I’m working on #3 at the moment. The theme is Body Snatchers: alien control/alien possession/alien replacement. John W. Campbell’s “Who Goes There?” is among the classics scheduled, with new stories by (so far) Douglas Smith, Scath Beorh, Kurt Newton and a guy named Gregory Norris.Issue #4 is being planned also. Theme is Strange Dimensions. Future issues will feature Rogue Robots, Derelicts in Space, Cosmic Canines and.... Well, big plans. 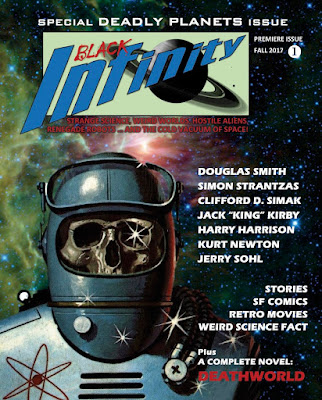 I had a great chat with Kurt Newton, and we both pretty much made it a love letter to working with you and BLACK INFINITY. You treat your authors well, Tom English. Why is that important?
I don’t really think I’m doing anything any other good editor wouldn’t do. But several things influence me. First, I love books and I put that love into all my projects. Second, I’m a writer, too. And I abide by The Golden Rule: I treat my writers the way I hope to be treated, and present their stories with as much care as I’d want for my own tales.I feel, for the most part, writers are under-appreciated. What writers do is magical. It’s hard work. It’s lonely work. And I try to do my part to facilitate their efforts.

What do you want today's readers to know about the publication?
Simple mathematics. I put a lot of time and money, sweat and inspiration into every issue. I try to make the magazine fun and cool and entertaining, nostalgic and thought-provoking -- without being offensive or preachy. But I can only do this as long as people buy the magazine. I’m a small, independent press trying to maintain a foothold in the market. So if you want a good read, or if you need to give a gift to someone who loves SF, support Black Infinity by purchasing a copy. Leave a review or just tell a friend. You’ll have my sincerest thanks -- and I can continue to provide an attractive forum for talented writers.
Posted by Gregory L. Norris at 10:14 AM 1 comment: