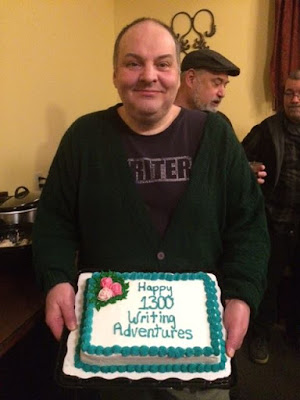 Back in the early days of my writing career, I got it into my head that I would strive to pen 1,000 completed works of fiction. This likely owes to one of those biography shows on the late, great Rod Serling, one of my lifelong role models and as prolific and supremely talented a scribe as there ever was. In January of 2013, I attained that goal and hit the Number 1000. For the longest while (decades?), I assumed that I'd stop at 1000. But my imagination didn't retire at the millennium mark, and I've kept writing, past 1100 completed works of fiction, 1200, and, at the end of 2017, toward the Number 1300.

In early March of this year, as another notable anniversary date readied to be celebrated, I wrapped my sequel to last year's novelization of the classic made-for-TV Gerry Anderson movie, The Day After Tomorrow: Into Infinity. The Day After Tomorrow: Planetfall all but consumed me during the start of 2018. Pages flew off notepads at a ridiculous clip -- one of those lovely instances where the writer seems to be channeling spirits. I absolutely loved the experience, and wrapped the longhand draft well in advance of my deadline with Anderson Entertainment. Planetfall is scheduled for publication in September, and landed on my list of completed works at #1299. Without delay, I pulled out a fresh notepad of lined paper, uncapped my pen, and began work on #1300, my Space:1999 fan fiction "Ninth".

Dating back to the start, most of my big numbers have been odes to the series that put the pen in my hand at an early age -- 1, 50, 100, 500, 700, 800, 1000, and 1200. 900 was my one and only Lost in Space fan fic, which came to me in a dream back in 1982, and was a joy to pen. The title, "Ninth", refers to John Robert Koenig, the ninth commander of Moonbase Alpha (as unforgettably referenced in the first season episode "War Games"), who finds himself alone capable of saving his people from a malevolent intelligence being beamed to Alpha from a point on the nearby starmap. The idea came from one of six I drafted for a failed revival of the series several years ago. While doing a forensic exam through every notebook (and stray note) last November to corral all of my as-yet-unwritten ideas, I came across those episode treatments and, along with "Plato's Tears", deemed them worthy of translation into short stories. And "Ninth" did not disappoint. 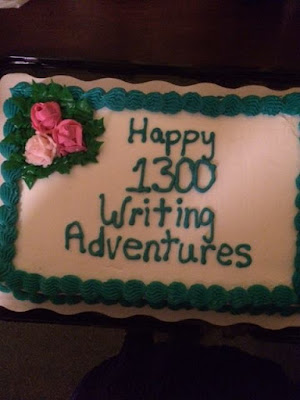 I tore through the story in a similar daze, putting down the words and pages and loving the experience. A full week before our writers' group would celebrate it's fifth anniversary with a big party, readings, food, and guests, I finished "Ninth" and hit the Number 1300. And when the Berlin Writers' Group gathered to mark its fifth year in existence, I was able to celebrate another milestone by reading the opening to "Ninth".

As of today, with the novel sequel edited and turned in and other deadlines calling, I've reached #1303. Sitting in my catalog of story ideas waiting to be written are eighty individual cards, containing one adventure apiece. New ideas this year have been slow in coming, which could mean my prolific imagination is slowing down or that I'm finally, after a lifetime of courting the muse, being granted a reprieve to catch up. Either way, I continue to write, finish, edit, and submit my work. I continue to dream and love the writing life. Will there be a Number 1500? First, I have to reach #1400!
Posted by Gregory L. Norris at 8:58 AM 1 comment: