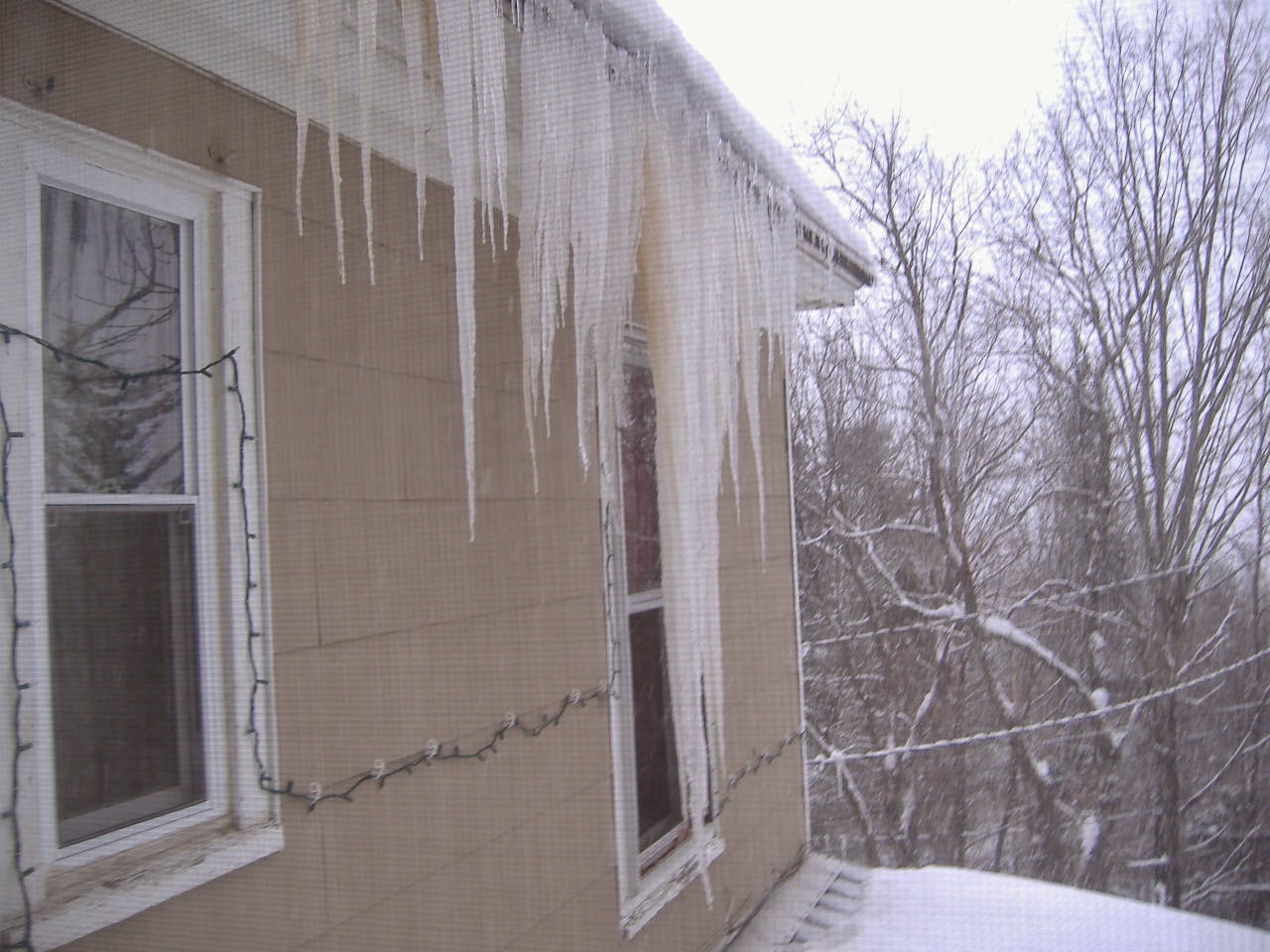 This is our family's second full winter here at Xanadu, in a town located in the shadow of Mount Washington. A few days ago, the only place on the entire planet colder than the mountain's summit (some twenty-two miles from my front door) was recorded at the South Pole, in Antarctica. Winters here are beyond brutal.  We've hovered below zero dating back to the last day of last year. Snow has fallen in heaps and buckets.  As clearly visible in the photo at left, icicles have given our house a dragon's mouth expression full of jagged teeth.  Said photograph was taken in early February; today, weeks later, those teeth have grown longer and sharper, and the snow has continued to pile.  On Monday, February 16 the thermometer read - 20 below.  By tomorrow, the 20th, we're expecting to dip even lower.

I'll admit it -- I'm sick of all the cold, the white. I have very fond memories of New Hampshire winters when I was a kid, particularly of playing in the Big Woods that surrounded our tiny cottage home. During a blizzard in the winter of 1975, I reenacted an episode of Space:1999 set on the ice planet Ultima Thule.  A few years later, I drove around with my mother in search of the day's newspaper during the Blizzard of '78 -- while most of New England was paralyzed, we toodled about in her old red Vega, circling Cobbett's Pond for an open mom and pop.  We snagged one snowy copy at a self-serve newspaper vending machine outside our post office.  In my late 20s while working on a novel set during a blizzard, I again developed a love for short, cold New England days. Not so much any more as I enjoy the last two and a half months of my 40s; I've started dreaming again of warm days spent writing on my sun porch, icy iced coffee and snoozing cats at my side.

Going into this winter, I decided as I always do to accentuate the positive.  With our mortgage ticking down to single digits in terms of payments, numerous releases on the horizon, and fresh hope for the potential contained in this new year, I planned to bundle up, hunker down, nest, and write.  So far, so good on that count. Over January and into early February, I worked on several old projects (one of my mandates for this year was to give THE ENDs to various stories, long and short, that have howled for completed first drafts, some dating back to the years immediately following high school!).  I also planned to write several stories out of season -- ones set in the balmy summer.  When getting lost in Writer's World, we're able to manipulate the laws of time and space enough so that we believe we're living the story, so I planned to cast myself in the roles of characters soaking up sunshine.  As of today, I've completed nine short stories and one novella; have worked on a novel and two other novellas. However, none of them have yet transported me to the toasty realms I set out to explore. One, "Visibility", is set in Iceland and has, at its core, an encounter between a man and a crypid -- Iceland's celebrated Ice Worm Monster, which is purported to inhabit a deep glacial lake. Brrrrrrr!  On the day I finished the manuscript's first draft, I bundled up to help shovel the latest storm's accumulation, eight fluffy inches, while sub-zero wind roared across our neighborhood.

Late last winter, which wasn't any more merciful, I sold a short story to the anthology XIII by the fine folks at Resurrection House.  The projected publication date was Spring 2015, but to my delight a trio of contributor copies showed up last week, a hopeful taste of spring weeks early.  Two days later, airmail from Australia arrived -- my copy of the anthology From Out of the Dark.  Dark contains my gothic short story set in deep space, "The Rats in the Bulkheads".  The story was written during last 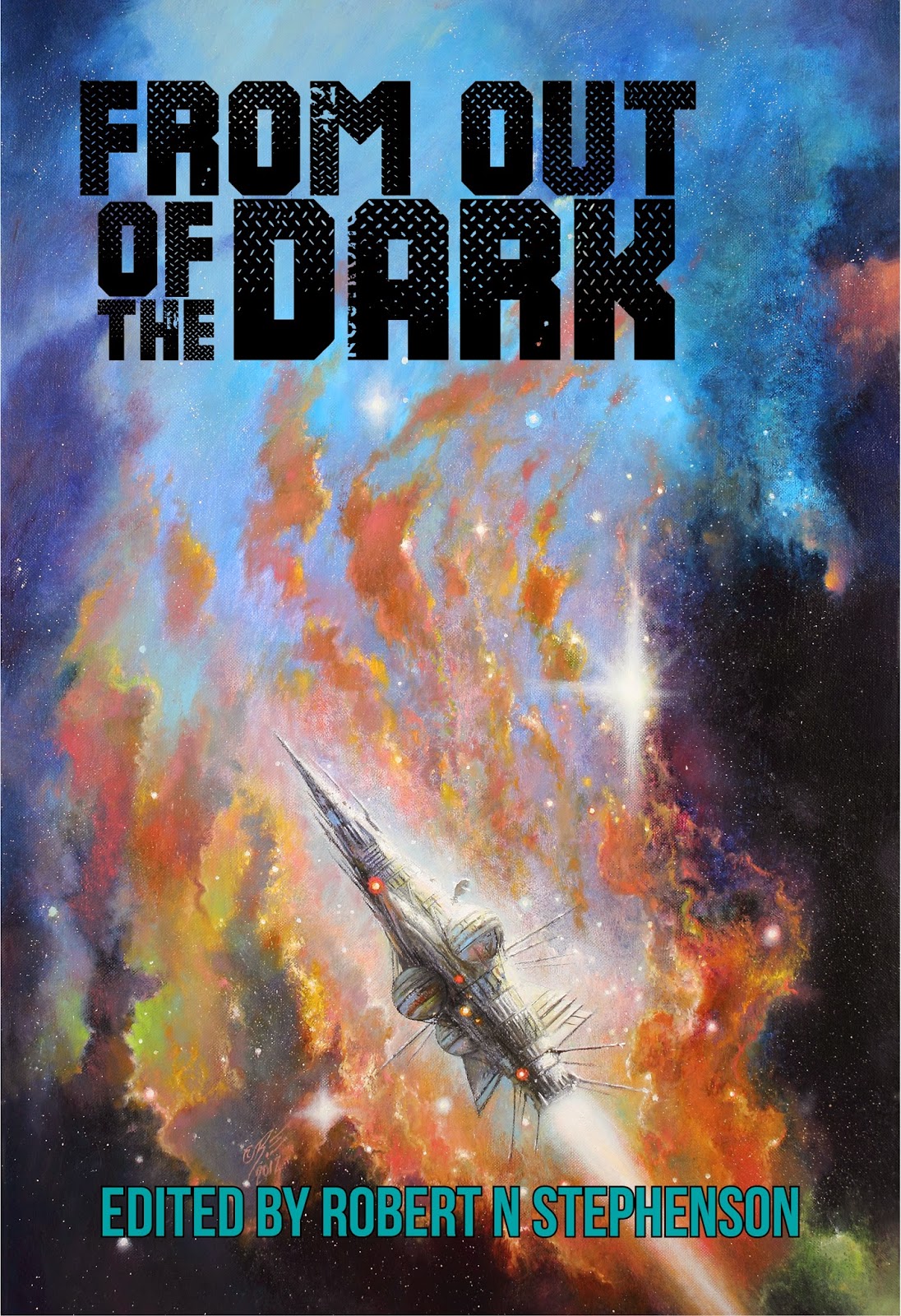 September's delightful stay at the Waterfall House, one of several completed during our writers' group's four-day retreat.  On the brisk Saturday previous, I placed a short story in the Cohesion Press anthology, Blurring the Line -- no small feat, as the editor was swamped with submissions.  My short story "1-2-3 Red Light" made it into what promises to be an exclusive club in terms of the Table of Contents.  And, despite my focus on older ideas needing their completion, a plethora of new ones have erupted from my psyche, demanding to be written down on note cards, some jumping to the front of the line.  All this while snow falls and icy winds blow around the walls of the house.  While a major water main in town burst, leaving us without water for two days -- the repair and restoration of water wound up jostling our pipes and causing several plumbing issues that didn't previously exist.  While our small family nests at Xanadu, never traveling too far, sustained by dreams of warm spring days and the return of the lush greenery that wreaths our home from May to September.

And until the weather shifts, I plan to immerse myself in writing adventures, new and old -- some hopefully set in sunnier climes!
Posted by Gregory L. Norris at 9:00 AM No comments: