Halloween 2015 Retreat to the Coppertoppe Inn

From Friday, October 30 through the First of November, ten members of my Berlin Writers' Group and its extended family retreated to what must be one of our fair state's best-kept secrets, the Coppertoppe Inn and Retreat Center. I discovered Coppertoppe last March after several in BWG mentioned doing another autumn retreat -- perhaps to one of our local high-end hotels here in New Hampshire's North Country. It turned out that the hotel of choice had closed down, leading me on a web search in between the penning of fresh pages to find other possible venues. And, as was often said and emoted during our weekend stay, we made the correct choice in our commitment to this wonderful literary destination. Hosts Sheila and Bill took great care of us -- me, almost from the moment I landed at the gorgeous B & B located on a rise overlooking Newfound Lake.

The retreat actually started for me several days before heading south from my front door to Coppertoppe. In the spring, I invited my dear friend Tina to join BWG for the retreat. Tina and I were thick as thieves in high school, a difficult but supremely formative era in my life. During that time, as I embraced my individuality, creativity, identity, and, yes, weirdness, Tina was the best friend I could have asked for. At the onset of sophomore year, I confessed to her that I wanted to be a writer. We instantly bonded -- I didn't know until then that she wrote poetry. For the entire year and the next one that followed, we were inseparable, often times riding the bus back to her house where we worked on our creative writing endeavors instead of homework, watched episodes of our beloved Star Blazers, which ran at 3:00 in the afternoon, and Force Five, another Japanese anime import about giant robots defending the Earth, that followed. Flash forward thirty-five years, and the star of Star Blazers, the fabulous Amy Howard Wilson ("Nova") has blurbed my book about giant robots, Tales From the Robot Graveyard, and my great friend traveled far north to stay at our home, where we would write and laugh and travel through time before departing for the retreat together.

The ride south through Franconia Notch to the town of Hebron was smooth and delightful, the fun enhanced by the addition of mystery writer and fellow group moderator Irene Gallant, whom we collected en route. As soon as we landed to a house filled with writers, most already composing new work, I was inspired by the view and venue. I learned that I would be staying in the Garnet Suite, which boasts a bed that would impress Louis the XIV, complete with a gargantuan bathroom covered in about an acre of serpentine marble tile and boasting one of those showers that makes a person recently turned fifty feel like pampered royalty. I carried up my few bags (I've learned to pack smartly and travel lightly after so many literary adventures) and then headed downstairs to the B & B's vast library to begin writing. It turned out that I hadn't packed as smartly but definitely lighter than I'd thought, when my computer shut itself down in power-saving mode, and I realized I hadn't brought the power cord with me.

No worries, however. Bill, a tech wizard, produced the perfect temporary loan, one of several Coppertoppe keeps on hand for those just-in-case emergencies. Soon, I was up and running, surrounded by books and other respected writers, and I quickly belted out the last 2,500 words of a first draft of "Vampire", a Halloween story moved to the front of a very long line of works in progress thanks to a writing prompt given out by the fabulous Judi Calhoun. The following morning, freshly showered (and feeling a lot younger than my years), I sat at the incredible writing desk in the Garnet Suite and began working on a fantasy short story that has lingered in my idea catalog for twenty-two years. After a struggle to find the groove, I decided to take a nap in my enormous bed. I passed out, unaware of how depleted my creative batteries have been, and slept like a baby.

After waking, I decided to indulge in a long, lazy soak in the suite's whirlpool tub. When I emerged, feeling like my body had transformed to the weight of granite, I flopped back in bed under the fan and, an hour later, had all the energy in the world. I powered through the struggle with the fantasy story, wrote almost to the end (some 5,000 words in all), and joined my fellow creatives downstairs in the library for our planned Halloween night reading. Irene had given us a prompt of her own for that night's event -- a Halloween-themed story, told in under 1,000 words. I shared "6 x 3", which weighed in at roughly 800. We went around the room, and I got to hear some amazing drafts, including a completed short story by my dear friend Tina, which inspired applause.  Another brilliant writer, Laura Bear (who traveled from New York State to join us), wrote a fantastic story on the spot, one set at the retreat involving the members of the group facing mortal jeopardy. The readings concluded with bags of candy and an abundance of inspiration. 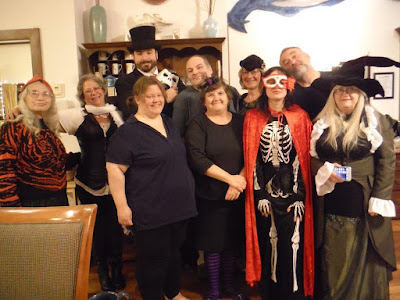 Fittingly, November 1 dawned overcast and moody, with fog obscuring the lake, a preview of the gray time that starts in this month and dominates our part of the world until March. I packed my bags after another of those luxurious, long showers, ate a spectacular breakfast, and headed down to the library, for the very first of National Novel Writing Month's write-ins. I penned an additional chapter of my novel, bringing my total word count to just shy of the 9,000-k mark. By 1:00, the car was packed, the last of us departed, and the retreat came to its official conclusion. A fantastic and productive time, we're already planning our next visit to Coppertoppe!
Posted by Gregory L. Norris at 10:42 AM