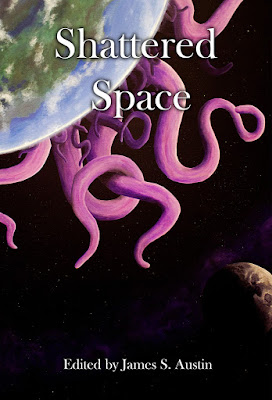 In early September of 2014, I joined many of my wonderful writers' group's members for a long weekend retreat at the Waterfall House. During that time, my pen moved nonstop, and I traveled unthinkable distances through the magic of the fresh page. One of those destinations was deep space, via a story I committed to writing during the retreat called "The Rats in the Bulkheads". That summer, I'd devoured an old beat-up paperback of Lovecraft's stories, and I got the bug to write a version of his "The Rats in the Walls", which had always terrified me as a young reader (and still does as an adult past his fiftieth year), only my version would be set in the dark wasteland of the unexplored galaxy. Early on the Saturday morning of the weekend, I picked a fresh notepad, put pen to page, and started free-writing a story about survivors of a generational exodus ship far from their new home who discover a threat to their existence, creeping closer from a region of the ship long ago sealed off during the catastrophe that diverted them off course.

I wrote the story through morning, paused for lunch, and completed it after preparing our big prime rib for dinner and setting it on a slow simmer. By the time the meal was served, I'd completed the longhand draft -- and was looking over my shoulders, unnerved by what I'd written. The perfect market presented itself in Shattered Space by the fine folks at Tacitus Publishing. It has been my pleasure to appear in Tacitus' two previous anthology releases, and I was thrilled to have "The Rats in the Bulkheads" find such a great home among so many unforgettable tales of outer space terror.

Many of my fellow contributors shared the back-stories behind their wonderful stories.

Daniel Rosen on "Little Deaths": "‘Little Deaths’ is part of a series of stories taking place on driftcolonies (generation ships). ‘Anabaptist', about personal religious faith came out in February 2016, from Apex. In April 2017, ‘The Ship That Forgot Itself’ will be coming out in IGMS. I've always been fascinated by the idea of slow space travel, and the way that cultures change in isolation. ‘Little Deaths’ in particular is an exploration on how taboos related to death might change if death was no longer a permanent obstacle. Anyway, I figured murder would probably become a lot more common, and besides that, how do we form relationships if no one ever dies? Are people really interested in spending more than one lifetime with another person? Americans don't seem interested in that, statistically speaking. Would monogamy be effective if we lived forever? Perhaps. Perhaps not."

Colin Hinckley on "Red Shift": "The idea for ‘Red Shift’ came to me in the form of a night terror. A night terror is different from a nightmare in that while you’re in the midst of a night terror, you can feel yourself in bed and see whatever invading presence is visiting as if it were in the room with you. This one was slightly different in that it wasn’t exactly terrifying. I became aware that I was in bed, swimming out of a deep sleep, and saw a red square floating in the middle of my room. I could sense its sentience, but no malice or ill will. It was just a floating, red square, watching me as I slept. Then it disappeared. This image of a sentient floating shape followed me around for a few weeks before I put it to paper. The scale, as with most things I write, turned out to be much bigger than I anticipated. And I watched with alarm as what started as a red square turned into a giant red space octagon. The piece came out more or less intact over the course of a feverish two-hour writing session and much bleaker than I would have guessed."

David F. Gray on "The Stars Denied": "In 1971, while mucking my way through eighth grade, I ran across a trade paperback entitled The Shadow Over Innsmouth and Other Stories Of Horror, by H.P. Lovecraft.  It was tucked away on a dusty shelf in the back of the school library. I took it home, expecting a collection of run-of-the-mill ghost stories. What I got was an introduction into what is commonly known as The Cthulhu Mythos. My mind was not blown.  It was nuked.  While I can name several authors who have influenced me over the decades, it was Mr. Lovecraft who stoked that initial desire to write. Flash forward to 2015 and the New Horizons flyby of Pluto.  Its stunning pictures, coupled with Lovecraft's story ‘The Whisperer in the Darkness’, collided in my brain and brought about ‘The Stars Denied’.  While not a part of the Cthulhu Mythos, nor in any way a sequel to “The Whisperer in the Darkness’, it's DNA is nevertheless steeped in Lovecraft's hellish visions and the nightmares he gave that middle school kid all those years ago."

James Austin on "Laundry" and "Heat Lightning": "‘Laundry’ was an enjoyable story to write.  The idea started simple enough, someone doing a mundane task in a futuristic setting.  As you can imagine, it came to me while sitting in a laundromat, wait for it… doing laundry.  Please hold in the surprise gasps.  There have been plenty of stories that include aliens, starships, and advanced technology without ever addressing those daily and weekly chores we all dread.  This offered my chance to explore my love of taking a look at the normal elements of life in a setting not typically observed. ‘Heat Lightning’ emerged from a seed planted long ago, and took a few years to develop into something I found edible.  Living in the Tampa Bay Area, you are exposed to plenty of lightning.  But what I always found so curious was ‘heat lightning’.  It would dance around in the sky, seeming to come from nothing, and no rain following the extraordinary display.  You have to understand, Florida storms can be legendary at times.  Running from your front door to your car would leave you drenched, maybe even a little scarred from the traumatic event.  But with heat lightning, what really happens in those peculiar clouds? For this story, I felt that there had to be a number of layers incorporated to tell one particular possibility, while trying to balance simplicity with complex tech jargon.  Also, keeping in mind the first rule of writing Science Fiction, never forget the human condition.  With so many moving parts, writing it was a difficult process and required a number of run-throughs before getting close to completion. The final result was not even close to where I expected it to end and I was enlightened from the experience."

T. S. Kummelman on "The Space of Gods": "When James first told me about the theme of the book, I figured this one would be easy.  Horror and science fiction -- my two favorite genres!  I immediately thought of Lovecraft; so much of his horror has a Science Fiction element to it, the leap to horror in space (opposed to his usual theme of horror from space) was automatic.  The challenge was keeping to the Lovecraftian elements: madness, terrifying oppressiveness, the need for the voice of the story to not necessarily meet a happy end…working these elements in was the challenge.  My original draft was too descriptive -- another Lovecraftian touch which, in this case, did not work so well.  Taking a hint from certain Hollywood storytellers, I opted to keep the horror itself ‘off screen’, as it were.  I gave minimal description of the ‘monster’ itself, which allowed me to keep some of the mystery.  I managed to keep to my original idea, which was basically ‘tentacles in space’ -- most of my stories never turn out the way I originally intended, but ‘Gods’ was (pardon the pun) a beast unto itself."

Brett Parker on "Space Cookies": "I got the idea for this story on a flight into Bangor, Maine.  The plane had descended through a cloud bank, which seemed pretty frigging big to me.  I mean, we entered the dang thing as soon as we started our descent, and it felt like we were flying into Carpenter’s The Fog or King’s ‘The Mist’.  Sure enough, we come out of the clouds and the runway looks to be about a hundred feet below us.  Made me wonder: ‘what business did this cloud have being that close to the damned ground?!’.  So I put a cloud where there shouldn’t be one -- in space.  The rest was balls-to-the-wall sarcasm; if there could be a cloud in space, why not a bunch of smart-asses, too?  The bitch of this story was the ending -- re-wrote it five times before it finally felt right.  That final ending was nothing like the other four, as all the others had a previously unseen character “returning” to the ship.  I had the right idea, just the wrong freaking character… "