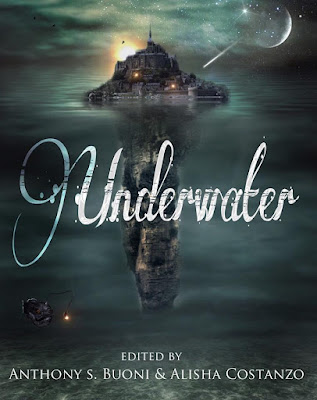 I grew up in an enchanted cottage, nestled between a stretch of vast pine woods and Cobbett's Pond, a deep, cold lake in southern New Hampshire. During boyhood summers, my family spent whole weeks at rented seaside houses over the border in Massachusetts, at Salisbury Beach. I've always had an affinity for the water, and often my most unforgettable dreams have wandered past shore, out into the depths.

Three years ago almost to this very day, I, my small family, and Muse packed up everything we owned and moved 150-plus miles north to the new/old home we purchased, Xanadu. Soon after landing and closing on our house, I began to feel off. The malaise manifested itself one month later in mid-April of 2013, during a retreat with friends from my southern state writers' group to Maine. I was feverish, and in serious pain from a lump that had started to form on the top of my head. I left the retreat early and, soon after, found myself in the hospital for a four and a half day stay, with a cyst that resulted in me being carved open and fed massive doses of antibiotics. I hadn't spent time in a hospital since I was a boy, and desperately wanted to be home. What got me through that time, apart from visits from family and friends, was my Muse, who I imagined being in the room with me, keeping vigil. I put pen to page and wrote when I wasn't being poked and prodded, and put down the first 3,000 words of a new story that came to me in one of those lightning strikes of inspiration, "Happiness Shoal", about a handsome man lost at sea who makes a miraculous reappearance back on shore and then sets out to solve the mystery of his missing days. I like to think the Muse and that story were what really healed me. But those pages sat unfinished in my works-in-progress drawer of files, until I read about a call for water-based romance stories, Underwater by the fine folks at Transmundane Press. I pulled out the partial, and dashed off the rest of the story's first draft over two days late last spring spent on my sun porch with a bottomless supply of iced coffee and cats holding vigil at my side. I'm beyond proud to have "Happiness Shoal" appear in the anthology, edited by the spectacular team of Anthony S. Buoni & Alisha Costanzo.

Many of my fellow co-authors shared the back-stories behind their Underwater stories.

Alisha Costanzo on "The Rainbow Sprite": "Vincent and Nani’s storyline began in the depths of Facebook roleplaying. Honestly, I don’t think many saw it before Nani’s profile was reported and deleted, and it’s still a sore subject between my roleplaying partner and me. We lost a lot of good material. But now, I’ve given her new life, and the story will likely improve as I move beyond our original tale, which focused more on their attraction to each other than any actual plot. Though I’m still amazed by the practice of taking on someone else’s character as my own, I hope I do Nani justice. And I’m excited about how this short fits in within my Broken World series with brief references to Phea, the queen, and Ria, my renegade. Vincent, my rough Commander, is cheekier than I imagined the first time around, but certainly not any less deadly. Or sexy. These two affect each other so greatly in the brief time they spend together that I can’t wait to see what they have planned for me."

Jean Roberta on "The Water-Harp": "Virginity. Chastity. Faithfulness. Honour. These words, and the concepts they represent, governed the lives of women in Western culture for centuries before the rights of adult citizenship were extended to women. This statement is not a feminist rant; it’s historical reality. In some cultures today, men still have the recognized right to kill their wives, daughters or sisters to restore family ‘honour’ when those women are suspected of being sexually ‘impure.’ My own experience as the Canadian wife of an African man in the 1970s showed me what could have been done to me if I hadn’t been able to escape from his accusations -- and of course, my escape intensified his belief that I had never been a loyal wife, especially since I hadn’t been a virgin when we met. Gothic plots about hidden bodies and murder within the ‘intimacy’ of marriage merely hint at a long history that is only half-submerged. Hiding a body in water is easier than digging a grave, and who knows what old, monstrous evidence of women’s slippery status may be lying at the bottom of a deceptively tranquil lake or a fresh, fast-moving river?"

R. Judas Brown on "Baiting the Hook": "I was working on a prompt for a writing contest and I was stuck.  They wanted a micro-sized story about sirens.  At the time, the largest body of water I had personally been on was a mid-sized inland lake.  The sheer expanse of a sea or ocean was completely foreign to me.  I could write about that kind of body of water from what I had read or seen on TV, but it wouldn't be real because I had never experienced it.  Then I thought about wolves.  Bears. Coyotes. Due to encroachment and a changing climate, more and more these wild creatures are seen on street corners and city alleys. Why not the predators from mythology?  While I can't speak from experience for large bodies of water, creeks and rivers are another matter.  That is how, in my mind, a mythological predator ended up in an environment modeled on the waterways I knew from Texas and Oklahoma."

Adrik Kemp on "Mischa and the Mermaid": "As a child, I spent a great deal of time ‘rock walking’ from beach to beach with my family. I’ve always been fascinated by the beauty of rock pools and the sheer scale of the diversity of marine life, so it was enjoyable to create some of my own in my story, ‘Mischa and the Mermaid.’ I find there are usually two types of mermaid -- the Disney variety and the horror variety. Mine are most definitely on the horror side of things. I’m a little obsessed with the sea, and I think that if mer-people do exist, they would have to do so in the deep. And to do that, I imagine they would have the nightmarish characteristics of deep-sea creatures. I took elements from these creatures and fashioned them into a society I thought might come of it if they were mixed with humans. That said, the story is really about a collision of this culture and that of the kids of an Australian holiday town, in particular Mischa, who, like me has a fascination with fantasizing about the deep."

Melinda Adams on "Land Shark Lover": "So I wrote 'Land Shark Lover' and the back-story... Well, I shouldn't talk about this... But I already have, in a play called 'The Sex Diaries' at the Dark Room Theater in San Francisco. My first childhood discovery into my own body and sex was when I was about six while I was in bed holding onto a large stuffed shark named 'Sharkey'. In my little imagination back then, Sharkey was a bad ass prince on a steel horse. I was six and already had a shark and a biker fetish. And it was all downhill from there."

Val Prozarova on "Ferryman": "The idea for 'Ferryman' came about when I was reminiscing with a friend about how I did not and never would ever miss sea kayaking in New Zealand. When asked why, I relived my terrible experience in finding myself underwater and trapped by the boat that was meant to hold me up. Long story short, I gave my avatar a much happier ending than mine was, trying the sport. He may have good memories of it, but I haven't been near a kayak since."

Diana Hauer on "Going Deep": "You know how every class had the geeky girl with braces and glasses who sat in the back with her nose buried in books? That was me. Mythology, ghost stories, science fiction, and fantasy kept me company growing up.  My imagination showed me the stories, playing them in vivid color upon my mind’s eye. Gods and goddesses, angels and demons, danced and fought for my entertainment. When I looked out the window, I imagined slyphs smiling back at me and green men peering through the leaves. When the thunder cracked, I closed my eyes and saw Zeus arguing with Hera about whose fault the latest human idiocy was. I started thinking about what might have happened to inspire the myths and stories surrounding Echidna and Typhon. If there were beings who had inspired our ancestors to weave such stories, what would they be like now, and what if modern humans encountered them? My contribution to the Underwater anthology is a small slice of possibility, of what could be waiting for us to discover out in the wild, amazing world. For a few moments, I hope that readers can imagine that it could be true. The swimmer in the cave could be you, it could be me. We are only ever seconds away from touching the unknowable, if we but open our eyes and allow them to look upon the world with a sense of wonder."