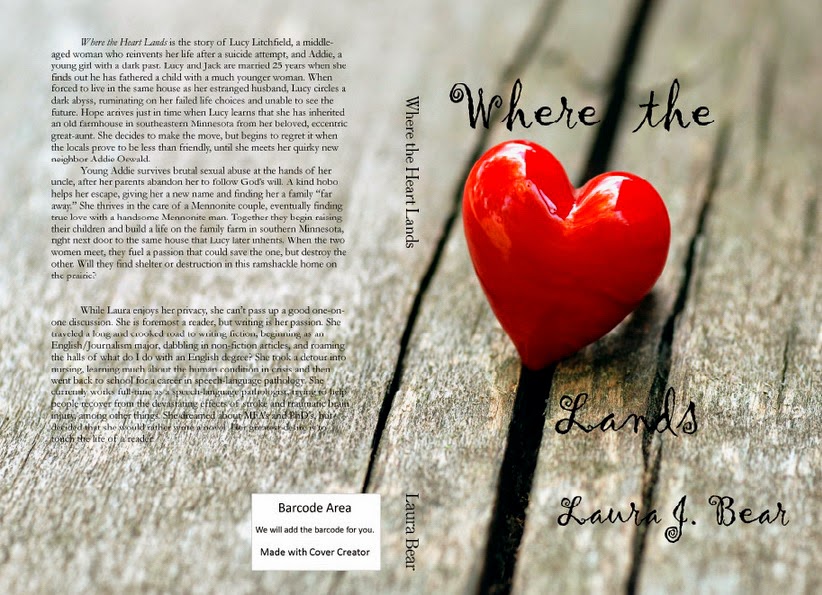 2012 was an amazing year, filled with literary adventures and trips to far-flung destinations -- coast to coast, and even beyond the coast to a wonderful writing retreat on the Isles of Shoals. Upon my return from Star Island, I learned that I'd won a free stay at the lux retreat center in Vermont, When Words Count, and had barely landed from one glimpse of heaven before I was packed and headed out the door again to another. The year ended as it began, filled with an up-surge of creativity and promise, and one last adventure: an invitation to return to the retreat center in Vermont for New Year's Eve festivities.  It was there that I met a talented new writer named Laura J. Bear.  I was impressed with Laura's verve from the moment we shook hands at the big breakfast table on the snowy Saturday morning of my arrival (later the very same afternoon, our real estate agent called to inform me that our offer on Xanadu had been accepted, leading to the next of my life's great adventures).  Even more so, after she read the opening pages of her first novel while we gathered that night in the center's cozy Gertrude Stein salon to share from our work. I knew Laura's spark was genuine -- it was only a short matter of time before we'd see her story of love and loss published for others to enjoy, I was convinced.  And I was correct.  The fabulous Ms. Bear's debut novel bows to the world on March 14, and tells the story of a woman at the end of her marriage who finds a magical new beginning at a house in rural Minnesota.  Equal doses heartbreaking and hilarious, Where the Heart Lands is masterfully told by a literary voice whose star is on the rise, and by a woman who is as beautiful as the prose she writes.

It was my pleasure to speak with Laura about her novel, and her plans for what promises to be a very bright future for this talented scribe.

This novel is brilliant -- and it’s your first!  Share with us some of its history.  How long did it take you to write the novel?  Where did the idea originate?
Thank you for the kind words, Gregory. I am honored to receive such praise from a master like you! This novel took me two years to write while working a full-time job, and another year to edit and ready it for publication.

My novel-writing journey began in an unusual way. I had always considered myself a writer, but never really knew which direction to take with it. After giving up on a writing career early on because of a lack of confidence, I embarked on two college degrees and two careers over a span of twenty years or so. I worked as a registered nurse for a decade before going back to school for speech pathology. While working as a speech language pathologist, a co-worker of mine asked me to sit in with a client of hers who had suffered a stroke. This person was a young woman with aphasia. Aphasia is a disorder caused by injury to the language center of the brain that makes it difficult to express and understand language in any form to varying degrees. This woman made her living using her psychic abilities to do card readings, so her livelihood required good communication. It’s fairly typical, as part of speech language therapy, to help a client with aphasia perform learned techniques to improve their verbal expression by providing an “unfamiliar listener” situation to help them bridge from the therapy setting to the real world.

During my session with her, I asked a vague question: “What will happen for me in the next five years?” then I drew my cards and she interpreted them: I had been a writer in my past, I should be writing right now, and in the future I would write a book and have lots of help from editors and others and I would be happy and successful as a writer! This was the second very direct “message” I’d had about circling back to writing, and this time, I paid better attention. I am rather down-to-earth and pessimistic at my core, so I never took much stock in psychic abilities before. Once I entered my fourth decade, though, I decided to be more open about such things. The moment I received the message, I decided to pursue my writing dream, no matter what. No more excuses. I sat down that night and began the kernel of my novel. The rest is history, or rather…present and future!

It was such a pleasure meeting you in Vermont in late 2012 into early 2013, and hearing you read from the novel's first chapters in their earliest drafts.  Tell us about the fabulous author, Laura Bear!
The pleasure was all mine, believe me. I have never met a more evolved soul before I met you. The whole retreat experience was like a dream. I met a wonderful group of writers who continue to be my friends. About me, well, I am neurotic and deeply flawed, but I feel things with passion. I love nature and outdoor activities like bicycling and hiking and paddling (kayak or canoe). I love all animals, but especially cats. I have a little crazy dog who does somersaults of glee every time I come in the door. Every cat member of my family began as a stray who found us. My spouse is also an animal lover. Treman is seventeen-years-old and terminally ill,  but as long as she keeps purring and eating, we’ll nurse her along. She still helps me write by walking across my computer keyboard. 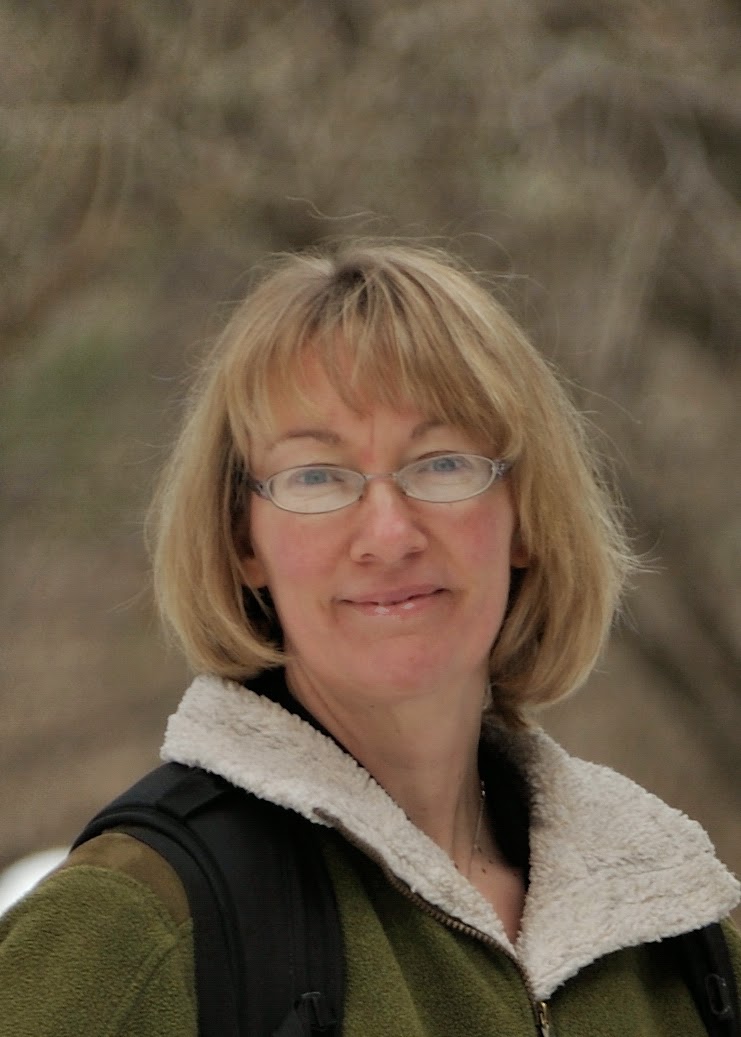 Your novel's Addie and Lucy are unforgettable characters.  I felt like I knew them as real people.  Tell us about your writing process, how you make the magic happen, in other words.
I’m thrilled you think so! I really love Lucy and Addie. I got to know them quite well during the writing of the book. My process is a little haphazard. For this book, I began with a character: Lucy. I didn’t really have a story for her, just ideas of a story. After I started to write about her background, the story began to unfold. Addie was a minor character at first, written to interact with Lucy. Steve Eisner at When Words Count Writer’s Retreat read my notes and really liked the sentence that is now the first sentence of the novel and he wanted to know more about Addie. He was quite intrigued by her, so I wrote Addie’s background and suddenly, there was this strong character with her own story. I just had to figure out how to put the two stories together in one book: a much more laborious task. I’d love to say the writing just flowed from there, but that didn’t happen for me. I had to scrape and peel every word from my brain like ancient dried up wallpaper off the wall. That said, parts of it did almost write themselves: the hobo Horatio; the parts with the caretaker of the inherited house, Tom Anderson; and the story of Lucy’s eccentric great aunt, Jean-Marie. I had great fun with those characters!

I hate sitting for long periods and I love to be outside with my camera or riding my bicycle or walking or paddling my kayak, so I had to learn how to stay still for writing. The writing gets done when I sit on my bum, but I am inspired by nature and movement.

I think your writing is marvelous, and that you’re an exciting new voice.  What other writing projects are you working on at present -- short stories, another novel?
Thank you so much, Gregory. I am quite excited about my second book. This time, the story came to me first and I am developing the characters. I have a sketchy outline. All I will say at this point is that it looks like it wants to be a thriller! I have several short stories started, but have been working on polishing the debut novel and fleshing out the next novel, so I still haven’t finished my short stories. I am in awe of your prolific genius, Greg! Working in a helping field, I do get a little depleted after working my day job, so I have to work in short bursts. I try to write at least something every day, even if it’s a short poem on Twitter!

Describe your writing space.
The third bedroom in our house is small, but duly suited for a writing room. I have a Mission-style oak desk in the middle of the wall, surrounded by two similar desks built by a carpenter friend. This creates a row of writing space with computer and printer along one wall with bookshelves and shelving lining the opposite wall. Double windows look out on the backyard with bird feeders, flower and vegetable gardens, and the stacked wood we use for the wood stove on the covered patio. Inside, the shelves are full of books I love books about writing, plus pottery and photos of family and wildlife. I have a small filing cabinet on the remaining wall and posters of musicians and instruments on the walls. A laptop computer lives on the middle desk. I keep several notebooks on the shelf or stacked on the left-side desk.  I tend to do my “real” writing on the computer. I used to write only in longhand when I was young and then transfer to a typewriter, but I find the computer freeing. My fingers just go and I don’t have time to analyze as much, which for me, is a good thing. I have a love/hate relationship with technology! 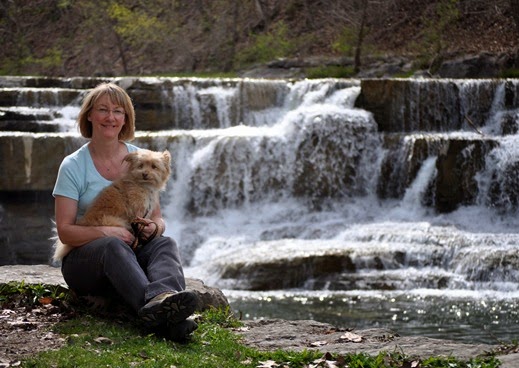 What’s Laura Bear’s version of the perfect writing day?
A perfect writing day is sitting in my writing room with a hot cup of tea or some red wine at my computer with the kitty cat lying against the keyboard. There’s a fire in the wood stove and a steady rain on the back porch roof and windowpanes, setting the mood and decreasing the temptation to go outside. All of this seems like a dream to me. I’m so glad I finally dove in. Thank you so much for hosting me on your blog site, Greg. You are a true gem of a person and a fantastic writer. I am truly blessed to be on this journey with such fine company.