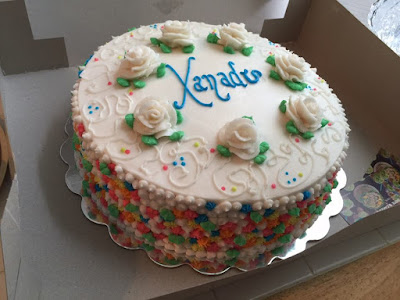 For ten years now, between our first house, our celebrated former apartment, and our new house, Xanadu, we've hosted an annual September party for friends and members of my writers' group. This year's event, in addition to marking a decade of great memories (and, often, some great writing prompts for the reading portion of the fun, which have resulted in numerous story sales), was particularly special: it signaled the end of the mortgage on our sweet old home, which has become quite the literary destination in New Hampshire's North Country. In addition to the usual fun (read: spectacular food and first-rate readings), I planned to do a ceremonial burning of the mortgage papers (photocopies, of course), and to share our once-in-a-lifetime fortune with our friends.

The brilliant writer Grace Paley once quipped that in order to be a writer, "keep a low overhead". I never forgot that spark of genius and have, for twenty-five years, done just that, striving to live a happy life, within my means and the means of a working writer. After a wonderful writing retreat with friends from my Southern New Hampshire writers' group in October of 2012 to the northern part of the state, I found this house.  When the price dropped 10 K overnight, we held a family meeting -- if we loved the house, we'd make an offer, relocate 150 miles from one front door to another, and begin a new life, with a low overhead.  Thirty months after closing, we made the final payment. The house became ours. A house that writing built. Thanks, Grace, for the inspiration and impetus! 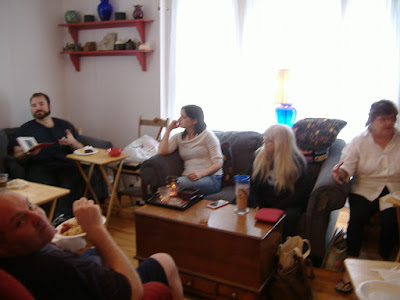 Back at the May party, I handed out fortune cookies from our local buffet to all guests -- the reading prompt for September's gathering. Writers were urged to use the fortunes inside to craft their stories, poems, and novel chapters. I cracked open my fortune cookie and, wonder of wonders, the fortune read: "You will be recognized and honored as a community leader". The back, prompting me to learn Chinese, read: kan bing (phonetic) -- "to see a doctor."  In May, I had just begun penning my Space:1999 fan fiction novel, Metamorphosis and figured I'd found the impetus to speed along -- 'leader' translating perfectly into 'commander', aka John Koenig, Commander of Moonbase Alpha, with a liberal dose of Doctor Helena Russell mixed in. I worked on the novel in the background throughout the course of the summer while writing to other deadlines, and read Chapter 11 when my turn in the rotation arose.

Eighteen guests arrived on a gloomy, rainy Sunday, September the 13th (coincidentally, a significant day in the Space:1999 universe -- the date Earth's moon is blasted out of orbit, kicking off the lunar odyssey for the 311 courageous men and women of Moonbase Alpha). It had poured the previous Saturday night. The house sparkled, and my office was immaculate following my end-of-summer cleaning/organizing/filing marathon.  My backup plan for the ceremonial mortgage burning was to hold it on our sun porch. But the sun broke through right when we planned to light the matches, and sunlight rained down. We held the burning on our front lawn, with its million-dollar view of the Androscoggin River and surrounding mountains (a friend videoed the ceremony, which included a reading of Coleridge's poem Kubla Khan by our group's famous poet, Esther M. Lieper-Estabrooks, but the video got corrupted). Despite a stiff breeze, the matches lit, and the mortgage papers went up in smoke. 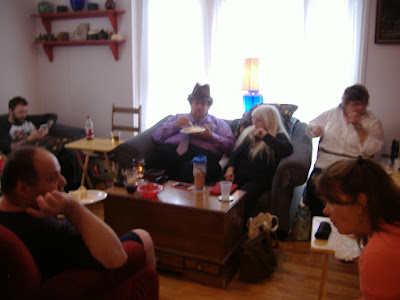 The readings were, as always, spectacular -- I love the idea of fortune cookies as source material for inspiration and writing prompts! The food, equally stunning. Among the buffet offerings, which stretched around the kitchen as is always the case, were: baby meatballs, chicken and dumplings, homemade potato salad, veggie platters and dip, baked crab dip and crackers, a luscious Jello salad, homemade soup, chips, cole slaw, pumpkin tarts, donuts, cherry pie, soda/coffee/tea, candies, and the luscious cake made for the occasion by Cote's Cakes and Cupcake Bar, one of the best cakes I've ever tasted. We'll definitely be using them again -- our annual Christmas party, theme as yet undetermined, to be held on December the 12th, in the not-too-distant future.
Posted by Gregory L. Norris at 10:55 AM