BEHOLD: THE MAD VISIONS OF AL-HAZRED! 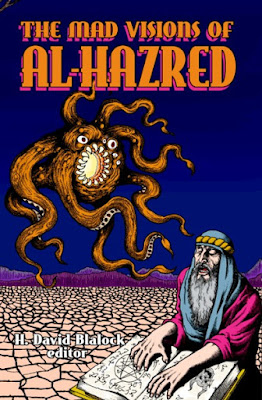 My 2017 began in a challenging manner. Newly returned from a long hospital stay and working on a novelization of the classic made-for-TV movie I'd been hired to write, The Day After Tomorrow: Into Infinity, my creative batteries were somewhat depleted. Editor H. David Blalock had rolled out his usual wonderful welcome for me to submit to his third Lovecraftian anthology for the fine folks at Alban Lake Publishing -- I'd been accepted into the first two, and this year's focused around the mysteries and horrors concerning the fictional "Mad Arab", Abdul Al-Hazred. But ideas for the submission call eluded me, which I found fairly maddening.

Until I departed on a brisk Friday morning for Massachussetts with good friend and fellow writers' group moderator, Jonathan Dubey. Jonathan had also been featured in the previous two years' releases, and had his Al-Hazred story ready for submission. We were headed south to stay with friends for the weekend, and from there were off to Boston to enjoy the launch party of Murder Ink 2, a mystery anthology we'd both been accepted into. On the long ride, I mentioned the germ of an idea I had concerning a memorial time capsule being opened, the most I'd managed to come up with before setting out for our big literary weekend. By the time we arrived some three hours later, I had the entire story outlined in my mind. Before Boston and the book party and luncheon, I'd also recorded the rough outline of "For Sale by Owner" on a note card. I dashed off a draft, polished, and made Mr. Blalock's deadline, and my story joins others in Alban Lake's new release, The Mad Visions of Al-Hazred.

Many of my fellow authors shared the back-stories behind their stories.

Jordan King-Lacroix on "My Eyes Were Set Aflame": "The back-story to my work might seem a bit banal, but really once I read the prompt, the idea just kind of came. I have always been fascinated by madness in fiction, and unreliable narrators in general. My favourite novel is One Flew Over the Cuckoo's Nest, so that probably has something to do with it. The complete freedom I had to express al-Hazred's harrowing experiences was a big draw as well: with Lovecraftian horror, it's kind of a wonderful 'anything goes' territory."

Paul StJohn Mackintosh on "The Howling in the Sands": "I wanted to use Abdul Al-Hazred’s fictional history to dig deeper into historic Islam, especially Sufi mysticism. The Jinn have always appealed to me as entirely credible beings of pure force that could have easily come to Earth on an iron meteorite. What better source for the mad Arab’s visions? The faux etymology of the ‘Al-Azif’ gave me all I needed to connect all of these. I had Muslim friends look the draft over, and they liked it. Islamic culture has a bad and bigoted press currently, and I wanted to help redress the balance on behalf of one of humanity’s great traditions. Plus, I have a Miyazakiesque love of weird flying machines of all kinds. When I unearthed the Imperial Airship Scheme, and the plans to fly the R101 over Arabia, that pulled the whole story together."

Bryan Dyke on "The Andalusian": "I penned a massive term paper in high school on ‘Al-Andalus: the Tragedy of Moslem Spain’, it was a grand, sprawling forty-page treatise and one of the biggest papers I had ever written at the time. I remember buying yellow parchment paper to print it on, so it was a pretty big deal. I think since then I’ve always been fascinated by that period. For this anthology, I wanted to also dive into what could drive Al-Hazred insane and push him to write down such a maligned book. Enter the Yith; who, despite their oft-benign status, were always one of Lovecraft’s most terrifying beasts. The Yith represent a sort of twist on the ‘Body Snatcher’ concept and their entire relationship with their rivals, the awkwardly named ‘Flying Polyps’, was vintage Lovecraftian brilliance.That set the stage for me to write a sort of two-fisted tale from a villain’s perspective in and around ancient Damascus in Syria. I wanted the lead character to be somewhat evil. If not a true villain than a character with obtuse motivations and morals, that is, ‘mostly’ beyond our understanding, but not entirely. Thus, ‘The Andalusian’ was born."

Allen Mackey on "The Buzzing": "Pssst, hey you, come here.  I have a juicy secret to tell you...Okay, here's the story behind the story, or as I like to call it:  Behind-the-Scenes of ‘The Buzzing’. One Wednesday morning in late June 2017 I was looking online for for Lovecraftian fiction markets and found a listing for an original anthology based on the Mad Arab!  The deadline was the next day.  I wrote ‘The Buzzing’ right then and there in one draft, sent it off and it was accepted.  Thank you David and everyone at Alban Lake Publishing.  See you next time."

Jonathan Dubey on "The Horrid Fate of Professor Merchant": "So I was at a garage sale with my mom, don't judge me, and I came across some old books. I opened one up because it was so old I couldn't read the spine and I could smell this musty, dusty, odor.  For a minute I wondered what I'd just taken into my lungs, then something else distracted me, so I moved on. Some time later, I read the submission guidelines for The Mad Visions of Al-Hazred and that afternoon came back to me. That was the start of ‘The Horrid Fate of Professor Merchant’. When I noticed the story becoming too dialog heavy, I chose to try something different; I cut out everything else. Why not tell a story with dialog and nothing else? People including the publisher and editor seemed to think it worked and so it was. Being entirely dialog lent itself well to being an old-fashioned horror radio show, so I did that too. Listen to it here: http://www.ghostshipradio.com/the-horrid-fate-of-professor-merchant.html."

Aaron Vlek on "The Prophet of the Black Hajj": "When I saw the anthology call for works exploring possible origin stories of the Mad Arab Abdul Al-Hazred, to say I was excited is an understatement of epic proportions. Beyond a few thin references that could be gleaned from bad Hollywood movies, I had never seen the character of Abdul Al-Hazred placed firmly within his Islamic cultural tableau. My own lifelong study of Islam, including a degree, and my personal closeness to many elements of Muslim practice, as well as being a lifelong lover of all things Lovecraft, gave me just the opportunity I needed to rectify this and to offer what I believe is a unique look at what a Muslim mystic who is lured to the proverbial Dark Side might actually look like in a historic context."

DJ Tyrer on "The Coils of Apedemak": "I wrote ‘The Coils of Apedemak’ because I wanted to look at Al-Hazred in the early days of his career, when he was still more knowledgeable than most, yet some distance from becoming the author of the Al-Azif, and I wanted to take him somewhere beyond his more usual Arabian haunts. So, I took out an Atlas of Islamic History and began looking at places he could visit and decided to take down the Nile to the kingdom of Makurria, or Al-Muqurra. As I researched the region, I discovered the existence of Apedemak, a god of pre-Christian Meroe and the story coalesced from the wonderful images of the deity."

Morgan Griffith on "Withered Moon Obsidian Black": "I first discovered Lovecraft tales in a used bookstore back in the ‘70’s. The place was a maze of shadowy aisles where silverfish darted across walls and soft, degrading cardboard boxes were stacked high with books at the end of each aisle. It was an incredible, and sometimes disturbing, treasure hunt. It’s been a while since I’ve read HPL, but the manuscript call for Mad Visions was intriguing. Research to refresh my memory of Al-Hazred sparked images of insects and moonlight; a creature in yellow, and the discovery of his cryptic manuscript. It’s an honor to be included in this collection."
Posted by Gregory L. Norris at 9:53 AM