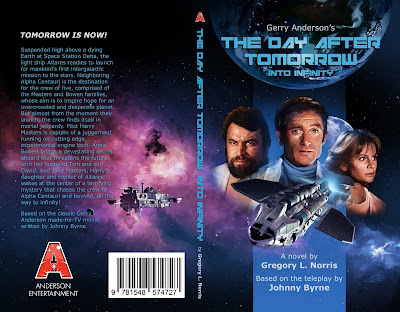 I was raised on a healthy diet of creatures double features and classic TV science fiction. When I was eleven, sitting cross-legged on the living room floor in the enchanted cottage where I grew up, I briefly got lost in Gerry Anderson's made-for-TV movie, The Day After Tomorrow: Into Infinity, in which the crew of the light ship Altares launches to nearby Alpha Centauri in search of answers that might heal a dying Earth. I was captivated -- not only by the story and visuals, but by the common DNA the project shared with my beloved Space:1999, a television show that forever changed my life. Day's entire adult cast had performed on 1999 -- Joanna Dunham, Altares' CMO, played "Vanna", Raan's (the late, great Peter Cushing) daughter in the first season episode "Missing Link." Brian Blessed, navigator "Tom Bowen" was "Dr. Cabot Rowland" in "Death's Other Dominion" and Maya's father, "Mentor", in the second season "The Metamorph". And of course, Nick Tate was Eagle pilot "Alan Carter" and fittingly helmed Altares as her captain. I simply loved The Day After Tomorrow: Into Infinity.

Flash ahead some four decades to a Saturday night in New Hampshire's North Country, where I and several members of my writers' group were enjoying a late September retreat at the Waterfall House. After a long, productive day of writing (and exquisite dining!), I retired to my room and found a message from Robert Wood, who, with the late Gerry Anderson's son, Jamie, sought my help in bringing the crew of Altares back to life for a new generation of Science Fiction fans and readers. Would I be interested in writing a novelization of Johnny Byrne's pilot episode script? Feeling both humbled and also daunted by the prospect of adapting a legendary writer's beloved work from script to novel, I said yes. On January 1, 2017 with the movie playing on my laptop's screen, the original script open on the desk before me, and a fresh pad of lined paper and pen in hand, I began to write.

The going was, at first, slow. But like the light ship's charge across space, I built momentum. Both Robert and Jamie Anderson requested certain additions and enhancements to the story, namely a bigger reason for the crew to willingly enter the black hole at the climax of the original movie. Immersed in the script and the film, I woke late one snowy winter night from a terrifying dream involving the crew and consequences caused by their mission. I found myself reaching for paper and pen in the drawer beside my bed, jotting down rough notes, and in the morning they still stood up. I was able to weave these darker elements seamlessly into the original storyline, thus fulfilling the task assigned to me. Those changes -- and the completed novel -- were praised upon delivery. My novelization of The Day After Tomorrow: Into Infinity was recently published by Anderson Entertainment to great reviews and the potential for more adventures to follow.


"The instant the possibility arose to be involved with Day it felt like an inspirational lightning bolt struck me," says Robert, who proved himself a wonderful editor on the project. "Suddenly my mind was swirling with possibilities. Being a life-long fan of Space:1999, one of the things that inspires me most about Day is that it shares a lot of genetic material with 1999. From the cast to the music, production design, special effects, models, and of course, the script by Johnny Byrne! Johnny’s connection is of utmost importance, because although the original TV pilot has certain limitations and is hindered a bit by the educational aspect that was built into it, I have no doubt that if it had indeed gone to series, and had Johnny Byrne continued to be involved in it, that it would have gone on to engage with the same kinds of story elements that he had been exploring in his episodes of 1999. I feel very strongly that Day is a natural inheritor of the Space:1999 storytelling format, just with a smaller crew. The Altares crew, like the Alphans before them, find themselves unable to return to Earth, lost on the other side of a black hole (or "black sun" in 1999’s case), and at the mercy of whatever lies ahead of them as they search for a new home in the unknown depths of space. So I think that the storytelling style, as well as the feel and look of the show, would have been very much in line with Space:1999. It really is a bit of a hybrid between 1999’s Year One and Year Two, so all the elements 1999 fans love about Johnny’s episodes could be utilized as a launching pad for further adventures of the Altares crew. I think the relevance of Day lies in its core premise, just like in 1999. It’s a metaphor for life. Just as the Breakaway blast was the moment of birth for a new tribe of humans -- the Alphans -- roaming the universe, so too the Altares' journey through the black hole and their subsequent exit into a new universe represents the birth of another new tribe of humans (the Altareans?). All of us have felt at one time or another alone or lost or adrift in our own world, just as they do in their new universe. Confronting unknown challenges ahead. Making do with the limited resources they have. Both excited by and afraid of the unknown, but unable to stop the inevitable movement forward in their search for a new home. Finding strength and support amongst those closest to you, whether they are family by birth or by choice. The human will to survive. I could go on, but the point is that there are a lot of big topics intrinsically tied to the premise of Day, and immense storytelling potential. There’s a line I remember Johnny Byrne saying about Space:1999 when he came to write the script for the short film Message From Moonbase Alpha years later. He said, ‘You only have to dip your fingers into this quirky, magical pool before all sorts of other chemical things start happening.; I think with The Day After Tomorrow: Into Infinity we’re dipping our fingers into that same magical pool, and the chemical reaction is just beginning."

Throughout the writing of the novelization, it was imperative to me to honor Mr. Byrne by keeping his dialogue intact. Also, I tried to flesh out the main characters, particularly Dr. Anna Bowen and Jane Masters, the ship's copilot. At one point, I felt as though I was with them, not as an observer but along for the actual ride, which I'd experienced way-back-when during the movie's original TV broadcast. There's a paradox central to the enhanced storyline I was asked to create. But another one took place while seated at my desk, and for most of the writing of my adaptation, I was eleven again, which I believe is one of the many great blessings of this particular project. But now once more in the present, is there a future for the Altares and her crew?

"When you look at the core premise of The Day After Tomorrow: Into Infinity I think it can work very well as a platform for modern storytelling that is both exciting and philosophical," Robert adds. "There were just a couple of key concerns that Jamie and I discussed, agreed upon, and then subsequently shared as guiding points for the novelization. One was that we wanted to minimize the overtly educational aspect of the original TV pilot as it hinders the storytelling and adventure, particularly in the context of an ongoing series, where you don’t want to have to essentially stop the flow of the story for a mini-tutorial on E=mc2, or whatever other scientific lesson was being shoe-horned into the adventure of the week. That really wouldn’t have been an asset for an ongoing series. Two was that we wanted there to be more depth brought to the characterizations than was possible in the scope of the original. They only had 47 minutes, and they had to get from A to B to C, so Johnny’s script was driven by plot more than characterization. Although there were warm moments and worries, but there could have been more if there was additional time. The novelization provided the space to expand the story and characters a little bit, while at the same time not straying too far from the original, and I think does that job marvelously. The twist added to the relationship between Tom and Anna Bowen is my favourite because -- without giving it away for those who haven’t read the book -- although it’s immediately obvious the instant you read it in the book, it’s also something that never would have occurred to most people watching the pilot. It’s a genius twist that is seamlessly integrated with the original, while also suddenly adding a wealth of character depth. I love it, and I’m sure Johnny Byrne would have been very happy with the new life that’s been brought to his old script."
Posted by Gregory L. Norris at 10:31 AM