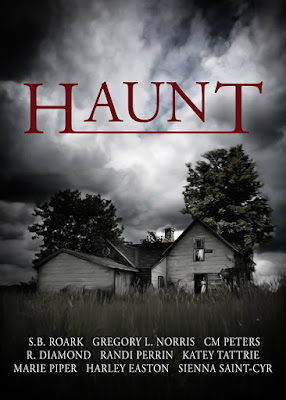 In June 2016, I had the great luck of attending Writing From Nature, a workshop/retreat set in the wild shadows of Mount Monadnock (which I climbed almost to the summit the autumn I was fifteen). On the Saturday of Christine Woodside's excellent weekend experience, she sent us out into the woods without notebooks and pens -- which I found supremely unnerving. We were to walk, observe, and return after an hour. I like to be challenged, and this facet really tasked me. Rarely have I ever found myself without pen and paper by my side. I ambled down to the little chapel near the lake, sitting on a granite bench set beside a field stone wall at water's edge, and was supremely inspired. So much so that I couldn't get back quickly enough to work on my short story "The Shut-in", of which so many details came to me from that one hour sans writing utensils. Over that afternoon and the next morning, I belted out most of the story, about a young man who finds a kind of counterfeit happiness in a haunted lakeside bungalow over the course of a troubled summer. But returning home and to other deadlines, the folder went into the 'works-in-progress' pile on top of the second of the two big four-drawer lateral file cabinets in my Writing Room, and there it stayed until late December. In between my return from Writing From Nature and the time I again picked up the story was a twenty-four day stay in the hospital. The very last completed project of 2016 was "The Shut-in", and only one day following its 'The End' I received a personal invitation from Marie Piper to submit to a new charity project being planned -- Haunt, which would benefit Chicago-area homeless initiatives. Would I be interested, and did I have anything that fit the particular guidelines? Did I? "The Shut-in" seemed the perfect submission, and it was. Within days of sending it in, I received a wonderful acceptance from Ms. Piper. Tomorrow, my tale appears in Haunt alongside eight others by some of the most talented contemporary writers out there, with a stunning cover by artist Aleisha Knight Evans.

Many of my fellow authors shared the back-stories behind their stories in Haunt.

Randi Perrin on "Redemption Hill": "This story was all about stepping outside of comfort zones. I’ve written paranormal/fantasy romance, m/m romance, and contemporary romance. I’ve never done anything in the horror vein. So when this project was pitched to me I was excited, which then gave way to fear. I had written the project off, and emailed Marie and told her I was too damn busy to do it. The truth behind that was that I was too damn scared to do it. I can’t write horror. What the hell had I gotten myself into? Then one day this character appeared to me, little spunky thing she was. The problem was that she was seventeen. I. Don’t. Do. YA. It’s my general hard and fast rule. I’m willing to do all kinds of things, but write about high schoolers? Are you kidding me? Still, Amelia wouldn’t shut the hell up. Once she gave me her first joke I knew I couldn’t just bury her and pretend she never existed. As a result, this story was born, which is everything I said I wouldn’t do: horror, YA, and not a romance. That’s extra scary for me. If you need me, I’ll be over here biting my nails while I rock in the corner."

Harley Easton on "People Who Live in Glass Sanitoriums": " I often find myself inspired by multiple sources. Elements of places, stories, and interactions that shouldn’t make sense together sit in my brain until they gel into something more solid. In my area, there is an old insane asylum that is rumored to be haunted. It has been the subject of neglect and vandalism. A beautiful building, the local historical society had been trying to raise money to save it by offering history walks and haunted tours. At one point, it was rumored that the asylum might be renovated for a haunted bed and breakfast location. The city keeps trying to tear it down and sell off the land, but they haven’t done it yet. The idea of this old asylum’s tenuous fate combined with the glass brick walls of an early 1920s house in our area and my teenage fascination, pre-reality television shows, with all things ghost hunting. Thus came the idea of an old sanitorium turned hotel and paranormal research center that had a stunning glass wall as a distinctive feature. My characters came out of real life as well. People will tell you that irritated authors will write you into their stories. Believe them. In my early twenties, I had a particularly bad series of dates with an individual who grew into my character Drew. It took over a decade, and several story revisions, for the character to soften out to someone likable enough to be the narrator and still flawed enough to ignore some rather blatant hints about where his actions were leading the story. In the end, I was much kinder about my character and his eventual fate than I could have been when I originally conceived the story."

Katey Tattrie on "Roommates": "Ryan Headley loves the outdoors and working with his hands. After a long search, he finds the perfect house, with land big enough for his dog to enjoy, for just the right price. But he soon finds out why; it’s haunted. Would you knowingly share your house with a ghost? What if it was the ghost’s dream house and it didn’t want to leave? If you could talk with them, would you hang out like friends? Especially if your dog loves them? Curiosity soon takes over, and Ryan can’t help but go digging into the ghost’s life, stirring up stories. Can he find out the mystery, of what has tied it here in death?"

C.M. Peters on "The B Room": "Manors. Big ol’ huge manors. I’ve always had a weakness for those fabulous looking homes but only got the chance to visit one, Casa Loma. It’s a beautiful Gothic Revival style house in Toronto built between 1911 and 1914. Large bedrooms, huge windows letting the light in, but frightening at night with all the creaking and wind drafts coming through the cracks. Although it’s not the setting I used for The B-Room, I kept it in the back of my mind while I wrote Beth’s story. So, when the time came for a haunted house story, what better to use a house I’ve visited and was terrified in -- an 800-meter long tunnel runs under the manor and feels like it’s suffocating you at every corner. Now add a young woman, which I see as the lovely Alicia Vikander, suddenly having to deal with his house as an inheritance and all that comes with it -- even if it might not be of this realm. This is what I began with and thus ‘The B Room’ was born." 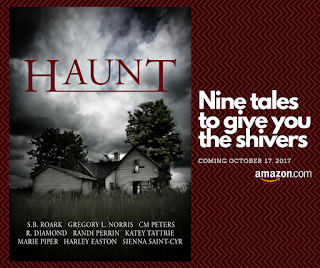 Marie Piper on "Jessie": "My story came to me in a roundabout way. It exists in the same universe, and serves as a sort of epilogue, for my Maidens & Monsters serial, which is comprised of classic gothic/horror tales re-told in a Kansas town in 1880. But, while those books were all based on classics like Dracula and The Phantom of the Opera, I decided that Jessie needed to pay tribute to a more modern horror master…Stephen King. It was inspired by Gerald’s Game, a book that still haunts me to this day (and was just recently made into a movie by Netflix!) I’ve always been fascinated by the American west, and the spirit of exploration that sent people crossing the country to find something new. Jessie and her husband, Daniel, came to Kansas to be free of prejudice they faced back home. But after Daniel disappears, Jessie is alone, trapped in her bed in an isolated farmhouse, with only her thoughts to keep her company. But is she alone? You’ll have to read to find out."

Sienna Saint-Cyr on "Possessed": "When asked what my inspiration for Possessed was, I huffed, then promptly felt my cheeks filling with heat. Normally, I’d have a real answer. Like, I had this experience that I wanted to write about, but not this time. I really didn’t have an inspiration for this story. I was dealing with depression and horny as heck at the same time. Thus, a story of tragedy and sex. While this isn’t the most creative of inspirations, I do connect to the main character in a deep way. Not only that, but I’m very into tantric sex. So I brought some of the energy/spirit scenes in to honor that part of me. All in all, this story was super fun to write. I enjoyed it because it wasn’t heavy in me dealing with trauma through writing, or rewriting some part of my life I wish had gone differently. It was simply fun. So for me, this is a huge win! I hope you enjoy my sexy little story of heartache and pleasure!"

S.B. Roark on "By Tethers Bound": "Every horror story needs a memorable antagonist.  I am a fan of vampires.  The bloody monstrous kind, no sparkles added.  I like my monsters with bite and unafraid to explore the bloodlust in us all.  Vampires have always been a mirror to humanity, showing us the demons which lurk inside our ‘civilized’ minds.  When I wrote ‘By Tethers Bound,’ I asked myself the question ‘What would it take for a vampire to truly dwell in civilized society?’  Inspired by Jekyll and Hyde and the tales of Jack the Ripper, I decided that the only answer was that they would have to let the monster out at times.  But what if they could cut out the monster completely and set it free on an unsuspecting world?  Would this person be responsible for the actions their monster took?  And to what lengths would they go to avoid facing their own personal demon?"