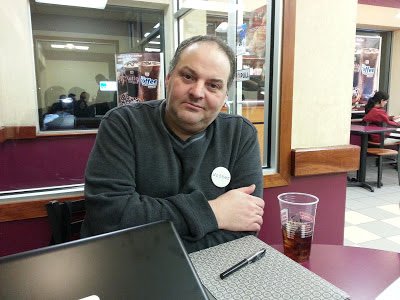 At some point in my journey, I realized I was not the kind of writer who liked being an island.  I'm more of a peninsula.  Oh, I love my alone time.  In fact, I'm notorious for 'nesting' in my home, working on my fiction, and having limited interactions with the rest of the real world beyond these fortress walls.  When I do venture forth, normally it's to enjoy a movie at the cinema with my squeeze or to shop for groceries. Sometimes it's only once in a full week, on Wednesday nights when I attend my writer's group meeting.

I joined this group in early 2011 when it met in the loud and chaotic cafe of the local big book retailer. Toward the end of the same year, facing greater hostility from the store's management over ridiculous reasons (not enough of us swiped membership cards on Wednesday nights, though all of us bought drinks, whole meals, and plenty of books and magazines there weekly) and getting elbowed out by other groups claiming the increasingly limited table space, we relocated to a small coffee and donut shop in a strip mall that, against all expectations and assumptions, has become to me proof of the Divine.  Despite no WiFi for laptops, brutal heat on one memorable July night when the air conditioning died, teeth-chattery cold on a recent January Wednesday, the occasional crazy customer, and robust coffee aroma that impregnates whatever clothes one wears to meetings, I have grown to love that venue like a home away from home. On most Wednesday nights, I arrive a few hours early, hopefully snag my favorite seat at the big round table beside the only public plug, turn on my laptop, and listen to music or favorite TV episodes on CD, like Space:1999 or Stargate Atlantis.  I order a drink, a bagel, uncap my pen, and the fresh pages flow. In December, I spent an entire pre-meeting visit jotting unwritten ideas on note cards as part of my end-of-year organization, getting the bones down on all those near-future adventures.  And it all felt like a blessing.  So much fun, it should be illegal.

But what has made Wednesday nights so unique and such a gift are my fellow writers, who routinely thrill, inspire, and captivate me with their newest offerings.  It has been my pleasure to see so many of them evolve and notch the first of what will amount to many publication credits. Though I'm frequently a zombie from the scalp down after six p.m. and hear the siren-song of my bed calling from across the miles, I am seduced by their prose, fall in love with their characters, and count my lucky stars for being in such talented company.  I completely believe that many of my comrades-in-pen will grace shelf space in that same big bookstore that didn't want our weekly visits.  One or two, I'm convinced, will become household names.  My writer's group is that good.

Last night, I attended what will be my last visit for a while.  Our little family is about to embark on a new journey to the grand old house in the hills we purchased, a hundred and fifty-odd miles from that strip mall that feels so much like home.  Being part German, I tend to not show much emotion (don't ask the many writer's group members who bore witness at my recent Sweet 1,000 Party, where I blubbed nonstop while reading from my 1,000th work of fiction, "Alibe's Story"; I'm not sure where the endless stream of tears originated -- in the story's subject matter or as a result of the occasion's scope. Maybe both).  But as I sat and wrote on my final Wednesday night in the coffee shop before the move, part of me was overwhelmed.  The other stemmed the waterworks by reminding me that I will return, and joyous reunions await in the not-too-distant future.  Already, plans are underway for a long weekend retreat to nearby Maine, where I and my fellow attendees will write, eat, read, and dream. We're hosting our maiden Sunday all-day writer's party up at our new home in May and, though I've already been invited to join a new local creative group in our soon-to-be adopted town that meets 2/10ths of a mile from my front door, I plan to pop down on Wednesday nights from time to time, just not as frequently.


Until then, I will love this new beginning and stately hilltop home to the fullest, write and polish and submit, and savor the many wonderful memories of my times at that table, with those outstanding writers and people, the finest of the fine, the best of the best.  Until we meet again, they'd better keep creating -- and save a seat for me!
Posted by Gregory L. Norris at 11:36 AM