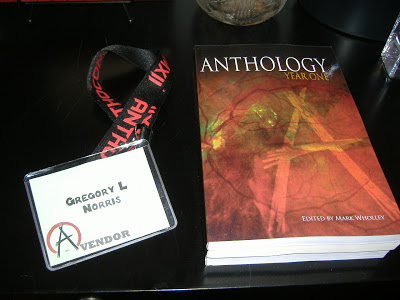 Anthocon 2012 loomed large and exciting at the end of a year-long schedule that found me traveling from one end of the country to the other, to conferences, writing retreats, and readings in venues as large as New York City, as intimate as Concord, New Hampshire. The second annual conference for writers in my home state was the culmination of a year's worth of adventures that put me on the road and took me away from home for a grand total of almost three months -- a full season!  I had such a great time at last year's Anthocon, I couldn't wait to reunite with so many of the wonderful writers and readers who made that time unforgettable for all the right reasons.  Though after realizing how long I've been gone from home and family in 2012 and cutting my Sophomore stay from four days down to two, the time was even more wonderful than expected. In addition to the aforementioned reunions with such fantastic folk as one of my favorite publishers, Charles Day, Jon Michael Emory, David Bernstein, Marianne Halbert, and the fabulous Sisters Dent, my good gal-pals Karen and Roxanne, this year's festivities introduced new luminaries to my world and included numerous attendees from my weekly writer's group.  Of added sparkle, my creepy short story, "The Guests," was accepted to appear in the gorgeous conference release set to have its unveiling at a special Saturday night ceremony, the anthology edited by con-guru Mark Wholley, appropriately titled Anthology: Year One.

I planned to ride in with Charlie, who's been my excellent hotel roomie now through four conferences. But an icy gray day punctuated by a Nor'Easter that was more blather than bluster left me craving the warmth of my little home on the hill.  So I instead headed up on Friday with my good pal Philip Perron, who runs the fantastic Dark Discussions podcast.  Philip is effortless to hang with.  We arrived to Portsmouth and the hotel wherein the conference was in full swing to be greeted by dozens of beloved faces -- friends from our writer's group, the Dents, even new chums known formerly only via Facebook, like the inimitable and vibrant Mandy DeGeit.

After acquainting and reacquainting, I retired to my room on the fifth floor and put down a few fresh pages on one of my works-in-progress, a memoir about a summer memory from childhood started in June that has mutated and grown monstrous in size -- some 54,000 words at latest count, with at least another 10 k to go.  Up early the next morning, I met the Dents for breakfast at the diner next door for delicious Eggs Benny and iced coffee, and then moseyed into the Dealer's Room, where I promised Charlie I would cover the table while he took story and novel pitches from writers hoping to break in with Evil Jester Press, specifically the new graphic novel project (one of my short stories is being scripted to appear in the first issue, alongside a tale by Jack Ketchum).  It was my absolute pleasure to be seated beside the dealer's table of the fine folk from Firbolg Publishing, helmed by the brilliant Dr. Alex Scully.  Alex and I talked at length, and within minutes of meeting, she offered me a story assignment in an upcoming Lovecraftian project. The press is republishing Lovecraft's "The Call of Cthulu" and I'll be writing a story told from a most unexpected perspective.  I was floored, inspired, giddy.  Adding to my excitement was seeing every print copy of my gargantuan collection of stories both short and long, The Fierce and Unforgiving Muse, vanish from the table.  I signed autographs on that book and The Call of Lovecraft, rubbed elbows with so many wonderful fellow scribes and fans and, following a light lunch, took in a reading by Alex's talented sister, B. E. Scully, who shared from her incredible short story collection, The Knife and the Wound. B. E. knocked it out of the park -- I left the conference's dedicated reading room with chills!

Saturday night's big book party to celebrate the release of the official conference anthology arrived, but as soon as I had my copy in hand, I departed.  I was physically and mentally exhausted, not only from Anthocon but eleven months of adventures to islands, inns, retreat centers, and readings.  I returned home, and the next day began to cook in anticipation of our now-annual post-Anthocon dinner gathering.  The Scullys, my friend Douglas Poirier from writer's group, David and his gorgeous girlfriend Sandy Shelonchik, and Charlie all rendezvoused at our casa for a delicious buffet that included artichoke heart dip, crackers and grapes, roasted chicken and vegetables over broccoli and cheddar rice with a bleu cheese sauce, a romaine, strawberry, and red onion salad with raspberry vinaigrette, frosted brownies, deviled eggs, and cherry-seltzer punch.  It was a fitting follow up to last year's time.  Like so many conferees, I can't wait for Anthocon 2013, one of my few travel plans for next year.
Posted by Gregory L. Norris at 12:20 PM