From the Bookshelf: Age of Giants - awakening by Rob Reaser 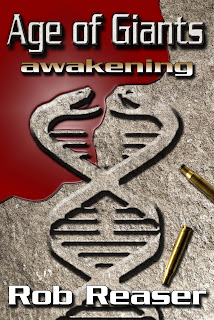 The angels have descended--sing Hallelujah, right?  Not so fast.  In Rob Reaser's chilling debut novel, Age of Giants - awakening, the Nephilim (half-angel, half-human hybrids) aren't here to be our guardians or our friends.  In fact, four generations have passed since they wiped out most of humanity and staked their claim to our world.  The Earth as we know it is gone; what remains is a desolate and dangerous battlefield in which bullets fly and blood flows.

Age, the first installment in a series of future-warfare adventure novels, follows Nora, a skilled soldier trained out of necessity as her nomadic clan resists the Nephilim and human traitors working with the invaders.  In the opening salvo, Nora and a small team of raiders travel to the outskirts of the Kralen Dominion in old New Mexico, hoping to take out a Nephilim radio transmission station and procure supplies and ammunition.  The plan quickly goes awry, and following a bloody firefight, Nora finds herself up close with one of humanity's merciless enemies.


"He looked to be well over seven feet tall. Probably more like eight, Nora guessed. Long, dark coarse hair covered his head. A short-cropped beard, riding high on his cheeks, hid much of his face. His broad nose, heavy eyebrows and wide mouth combined with a light brown complexion to complete the horrible visage.
Horrible. That was the word she’d often heard used to describe the Nephilim. She could see now that it suited them perfectly.
He wore dark blue pants that fit snugly around his legs. His thighs were massive, each nearly as wide around as Nora’s torso. Fine, tanned leather boots were laced high over his calves. He wore a loose, dark brown tunic—made even darker by the enormous amount of blood pumping from his multiple chest wounds. The garment fell well below his waist and was cinched with a broad leather belt and an ornate gold buckle.
Nora stared at the man in a sort of primal shock. It was several moments before she realized she had stopped breathing, and a few more before noticing that the Nephilim hadn’t. She watched, stunned, as his huge barrel chest slowly heaved like a pulsing mound of earth.
They said the Nephilim were impossible to kill. Nora wasn’t sure she had ever believed that, although she was now certain that they could be seriously hurt. But she understood how such crazy talk could become legend. No human could ever have survived that many shots to the chest. Nora tried to understand what she saw before her. Assuming their anatomy was the same as a human, this Nephilim had to have at least one shot to the heart, one or two to the spine and the rest penetrating the lungs. And yet he lived, breathing laboriously, but with a steady rhythm.
Nora felt a most unusual fear, one she had never experienced before. She had been in plenty of firefights. Killed men. She was always anxious and tense going into battle, senses heightened, pulse rate elevated. That was normal. But she had never truly been afraid. Now she was. The living nightmare of her childhood lay before her. It left a hollow feeling in her legs. Her head buzzed and her ears felt as if they were filled with water. Her vision dimmed at the edges until all she could see was the blood-soaked Nephilim on the ground.
She settled her eyes on his, and saw that he was looking straight at her."
On the heels of the engagement, Nora meets Stu, a captured resistance fighter with knowledge of communications technology who reveals a looming new threat not only to her clan but to all raiders.  After the Nef's capture Nora's father and most of her people, she finds herself among a greater resistance than she ever imagined possible -- and at the terrifying very epicenter of the war.
Reaser tells an excellent tale, his style muscular, his world building instantly believable and engaging.  In Age, human resistance fighters learn to hunt, gather, and engage the enemy in a dusty landscape filled with the remains and reminders of today's world.  The Nephilim's disposable human labor force construct huge stone palaces to their ruthless masters, whose feudal, fraternal society is well thought out and believable.  Not once does the pacing slow -- Age of Giants is the definition of a page-turner.  I found myself cheering on Nora and company --  and dying to read the sequel!
It was my honor to work as a feature writer for Rob Reaser for several years when he edited the late, great Heartland USA Magazine -- the second largest men's general interest publication in terms of circulation after Playboy (some three million issues bi-monthly).  During my stint, Rob assigned me plum adventure stories on such topics as the U.S. Coast Guard and Goodyear Blimp fleet, and celebrity interviews with Dirty Jobs dude Mike Rowe, Animal Planet's Jeff Corwin, and Weather Channel storm chaser Jim Cantore, among others.  After Phillip-Morris killed the venerable magazine, Rob tried mightily to resurrect it with a new publisher.  And he wrote one hell of a novel in the interim.  I recently had the pleasure of speaking with Rob about Age of Giants and its forthcoming sequel. 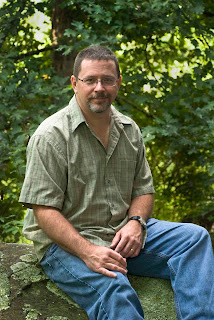