The Call of Lovecraft 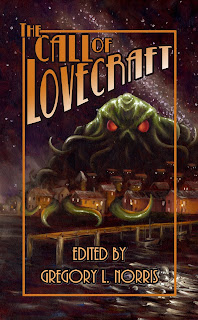 The long-anticipated homage to all-things-Lovecraft has been put to bed and sent off to the publisher. I first became associated with The Call of Lovecraft as a contributor when the book was set to be published by a different press.  A year later, so much has changed -- after Call's resurrection from the dusty vaults of dead projects by the fine folk at Evil Jester Press, I was brought on to edit and collect the original Table of Contents (all but one tale and author are back and on board), my own story accepted by the then-editor, "The Green Dream," had since sold elsewhere, leading me to replace it with "The Mercy of Madness," an even more appropriate 6,000 words (details to follow), and for logistical reasons, the original H.P. Lovecraft reprint that would have been included, "Pickman's Model," was dropped in favor of "The Tomb," first published in 1922 (copyright issues post-1923 are a very gray area in regards to the celebrated American author's work).  Artist Billy Tacket's amazing original cover was contracted for, the brilliant Ramsey Campbell agreed to reprint his chilling "Cold Print," and I chose six authors to round out the anthology, which weighs in at a very respectable 76,000 words, all told.


Editor's Foreword
Cold Print by Ramsey Campbell
Izothaugnol Ascending by Lee Clark Zumpe
Legend by Jacqueline Seewald
The Colour of the Deep by William Meikle
The Winds of Gobekli Tepe by James Ravan
Blood Pine by Carol McAllister
The Vessel by Geoffrey James
Magnus the Magnificent by Roxanne Dent
The Tentacle by John F.D. Taff
The Clearing by Derek Neville
I LUV RT by John B. Rosenman
And in the Darkness I Waited by Scott Lefebvre
Endless Hunger by Karen Dent
The Shed by H. David Blalock
That Place by Scott T. Goudsward
The Mercy of Madness by Gregory L. Norris
The Tomb by H.P. Lovecraft 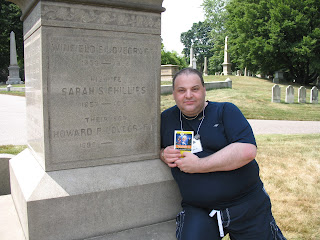 (Me -- and about a hundred extra pounds of me since shed -- at Lovecraft's grave in July 2008)
From my editorial foreword:


In December of 1993, I woke screaming early one Saturday morning from perhaps the most terrifying nightmare of my life—and I’ve had many dark dreams since my youth growing up near the big woods in . I wrote a draft of the dream’s linear storyline, which culminated with a man hunched down beneath a window in an abandoned factory hemmed in by trees, staring out through a brittle shade made opaque by a full moon, when something gargantuan on the other side passes by, pauses, and turns toward him. I read part of “The Mercy of Madness” to the group that following Thursday. At the same meeting, Scott T. Goudsward shared an installment of his latest story, which also paid homage to Lovecraft, a chilling early version of “That Place.” For the next two weeks, we read our work to a captive audience, our fellow scribes held paralyzed in breathless anticipation of what would happen next. Though I’ve left the group, years later friends still mention our two stories and wonder where those tales were published.
The answer is here, in The Call of Lovecraft.
So listen for the Call -- the book is scheduled for release next summer and will make the perfect read, whether on the beach or in bed at night, with the lights still on.
Posted by Gregory L. Norris at 5:51 AM

Email ThisBlogThis!Share to TwitterShare to FacebookShare to Pinterest
Labels: Evil Jester Press, Gregory L. Norris, The Call of Lovecraft, The Mercy of Madness