STAR TREK: VOYAGER -- A Fond Return to the Delta Quadrant 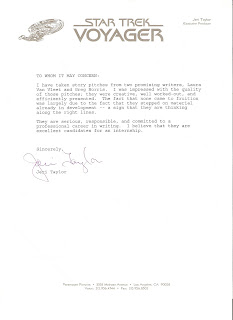 This week, I hopped back onboard the Intrepid-Class Starship U.S.S. Voyager, after a fashion.  For quite a few years, I was associated with the fourth live-action Star Trek series in a professional capacity as both TV journalist and TV screenwriter.  With my good friend Laura A. Van Vleet, I was vetted into the story pitching pool by series creator Jeri Taylor.  Laura and I had written a massive feature article on Ms. Taylor's body of work for the Sci Fi Channel's magazine and, impressed with our knowledge of the franchise and our competence in storytelling, she invited us to show her what we had.  She would also recommend us both for internships on set at the Paramount Studios at 5555 Melrose Avenue.

It took nearly a year of meetings, but we eventually cracked the Powers-That-Be, selling not one but two episodes: "The Hiding" which went through committee to become the fifth-season's unforgettable "Counterpoint," in which Captain Janeway (Kate Mulgrew) outwits a powerful military leader to save survivors of a persecuted race (we had the telepaths hidden in Voyager's ground hover foot pads, not the easy out of the transporters); and "The Well", which went on to become "Gravity," and originally involved Tom Paris (Robert Duncan-McNeill), the Doctor (Robert Picardo), and Neelix (Ethan John Phillips) trapped in a gravity well and staging a daring plan to escape.  That story was committee'ed into the backstory of Vulcan Tactical Officer Tuvok.  For "The Hiding," we had the pleasure of working with staff writer Nick Sagan, Carl Sagan's son and a true gentlemen in the business.

During that time, Laura and I had numerous opportunities to work with Ms. Mulgrew as well (for the series finale, we were invited back to the set and wrote some thirty-plus feature articles for various national magazines and newspapers).  This week, Kate Mulgrew -- the Trek captain who took down the Borg Collective -- wrote a stunning blurb for my forthcoming collection of original short and long stories, The Fierce and Unforgiving Muse: A Baker's Dozen From the Terrifying Mind of Gregory L. Norris (Evil Jester Press).  The blurb is incredible, generous, powerful, a clear sign that this book has the potential to become one for the history books. Muse is scheduled for release in December 2011.
Posted by Gregory L. Norris at 6:09 AM