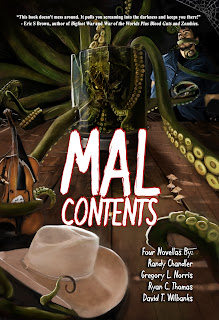 GMP showrunner Ryan Thomas approached me in early 2011 to contribute a novella to the then-unnamed project, which was operating loosely under a theme of Revenge and Redemption.  I wrote two for Ryan, unable to put either story down once started (the second, "Nightmare Near Highway 101," will appear in my forthcoming collection by EJP, The Fierce and Unforgiving Muse).  But I have quite the fondness for Sunny Weir and sympathy for the predicament she finds herself in after her attacker corners her, forcing Sunny to fight for her life in a kitchen competition unlike any other.  To read "The Mushrooms" as well as the three fantastic novellas penned by Ryan, Randy Chandler, and David T. Wilbanks, be sure to pick up a copy of Mal Contents.
Posted by Gregory L. Norris at 7:18 AM