From the Bookshelf: The White Mountain by Dan Szczesny 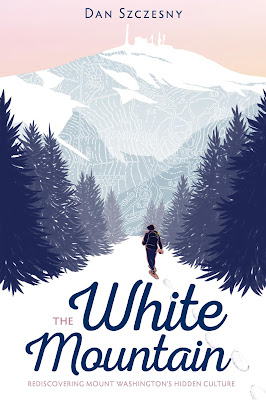 Turn right at my driveway, travel to the end of our country road, and turn right again. Half the length of a football field later, there it is: Mount Washington, looming large over our small northern town. The image is stunning, regardless of the season -- white in winter months and most of the spring, green through abbreviated summers, color-stroked in autumn. Five years after moving to Xanadu, our home in the hills, that view hasn't grown any less majestic.

It was soon after relocating here that I had the pleasure of meeting writer Dan Szczesny. He'd reached out to me following my appearance on the TV show New Hampshire Chronicle, which had done a feature on my writing career. On a snowy January Sunday afternoon, Dan joined us for dinner and conversation, and we became instant friends and colleagues. I was honored to appear in all three Murder Ink New England newsroom mystery anthologies selected and edited by Dan, and I and others consider him an integral member of our Tuesday night writers' group.

A widely published and celebrated author, Dan's latest book release pays tribute to New England's tallest mountain -- and that view, both awe-inspiring and humbling. It was my pleasure to sit down with him and discuss The White Mountain.

What was it about the subject that inspired you to write The White Mountain?
The basic conceit for the book, a year in the life of Mount Washington, had been kicking around in my head for a long time, but I never had the resources, time and support to be able to pull it off. I spent years creating the personal capital in terms of trust and ability before I felt I could reach out to the organizations I needed to make the project work. The Auto Road, Cog Railway, AMC and Mount Washington Observatory had to be fully on board and give me full access for this to happen, so it took me a while to build that trust before pursuing the book. But once they all said yes and I was off and running, the idea changed and became more about connection. Mount Washington has sat in the collective imagination of Europeans for 400 years and that's a lot of time to build a mystique, culture and legend all its own. Once I started pulling on the story threads of the mountain, there was really no end to the characters and legends that began to unravel.

After climbing to the base camp on Mt. Everest, how daunting were your Mount Washington adventures?
Well, physically, getting to Everest Base Camp was harder. But The White Mountain was a far more daunting writing challenge than The Nepal Chronicles my book about the Everest trip. Primarily, because there was so much material -- so many people the mountain has touched in some way -- it required far more organizational efforts. In Nepal, you'd get up each morning, walk for a bit, take notes and pictures and then assemble the journey chronologically. Here, though, I'd take part in an event, discovered a dozen contacts, people or archival threads to follow, and then have to assemble all the disparate information into a readable chapter.

What were the most difficult aspects of penning the book?
Well, like I mentioned above, once I had books and books, and notebooks and notebooks full of interviews, archival history, facts and stories, the heavy lifting came in attempting to draw connections between the past, the stories of the interviewees and my own experiences in a way that provided a narrative for the reader. I had no interest in the book becoming a guidebook, nor did I want it to be simple memoir. Plus, I worked hard to find a present tense narrative style that combined both my own adventures with that of my varying subject matter. For example, how do I run up the mountain in June and then visit the home of one of the runners in December and build a present tense narrative out of that time line? I think I pulled it off, at least I hope so!

You spent some time at the weather station—did you get any ghostly vibes, as that place is famously considered to be haunted?
Oh yes! The observers have all sorts of stories they tell around the kitchen table about ghosts and goblins, as the wind rattles the tower and ice creaks and groans. It's the perfect setting for spooky tale telling. In the book, I do write a bit about Lizzie Bourne, the first woman to perish at the summit when she was only a teenager, and she died only a few hundred feet from the safety of the top. There's an amazing portrait of her that normally hangs in the visitor center, but during the summer tourist season it's easy to miss in all the chaos of the crowds. But in the winter, when that place is empty and your footsteps echo in the hall while a storm rages outside, the eyes of Lizzie seem to follow you as you walk through the unlit atrium! That's spooky! I also write about my own ‘encounter’ with Lizzie in the book.

What’s next up for you writing-wise?
First up, the tour for The White Mountain, which will start in earnest on July 16, will cover six states and nearly 60 presentations, meet and greets and talks, so a lot of my time and energy the next six months will be on making sure that's successful and the book gets into as many hands as possible! Then, this year I have a handful of short stories I'm writing for some upcoming anthologies. I continue to write for AMC Outdoors and Appalachia Journal, two amazing publications that are a joy to work for. I have a kids' picture book that I'll start shopping around in the fall, and I think I'll begin looking for an agent as well at some point. Long term, I've begun research on my next big project, a non-fiction book about New Hampshire's local connection to the Death with Dignity debate. I can't go into too much detail yet, but I happened upon some amazing source material from an early court case that will anchor the story. I'm just chomping at the bit to dive in, stay tuned!