A Tuesday night in Windham, New Hampshire.  I was ten-years-old, home from school for several days with a bad autumn cold, antsy and electrified in a way I only knew on Christmas Eves.  This night was an event to me bigger than Christmas, bigger than anything, and no miserable cold was going to dampen my elation.  The highly-anticipated outer space adventure, Space:1999, was seconds away from premiering on our ugly, boxy TV with the rabbit ears.  Created by Gerry and Sylvia Anderson, who'd previously hooked me with their moody parable about a secret alien invasion,  U.F.O., the series followed the brave men and women of Moonbase Alpha, a lunar colony launched into a hostile universe after a massive explosion blasts the moon out of Earth's orbit on that unimaginably distant future date, September the 13th, 1999.  Nothing I saw previous or since has affected me so powerfully, and on so many levels.

Several factors, from where I grew up to having two talented grandmothers to regular weekend doses of Creature Double-Features, groomed me for the writing life.  But Space:1999 put the pen in my hand, because it got me to think. Throughout my teens, I wrote numerous Space:1999 short stories and novellas.  By the time I was sixteen, I'd penned my fiftieth completed fiction project, a meaty novella called "Dictator". 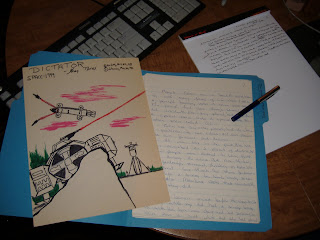 (The above photo is a blast from my past -- my 50th story, complete with hand-drawn 'cover'.  It sits beside the longhand first draft of my present and 928th, which is slated to appear with Ramsey Campbell and a reprint by H.P. Lovecraft in early 2012.)

I wanted to live on Moonbase Alpha and, through my fiction, I did.  And then, as an adult, as a professional writer, I got to go there in the flesh through my nonfiction work writing for the Sci Fi Channel's magazine.  In 1998, I was one of a handful of journalists Martin Landau granted interviews to for the X-Files Movie.  In 1999, I boarded a plane and flew out to Los Angeles, where a big convention to celebrate that ominous date was being held over the September 13th weekend.  Within seconds of entering the hotel lobby, I bumped into Zienia Merton.  I just happened to be wearing a button bearing a photograph of her and the late Peter Cushing.  Within hours, I had met the writers of the show, and many of the actors.  I bought Anton Phillips...aka Doctor Mathias!...a margarita during dinner.  I hugged Barry Morse (a year later in 2000 in New York, he remembered our lovely conversations about writing and his portrayal of Professor Bergman and what an impact he'd made on my life).  I stood within mere feet of the gorgeous Barbara Bain, who performed Love Letters with Morse.  I got to hug Nick Tate.  I danced when, as 12:01 dawned on September the 13th, 1999, the theme songs from both seasons of Space were played. 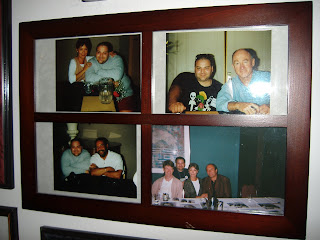 A year later in New York City, we picked up where we left off.  This time, I got to meet Catherine Schell, whose "Maya" may be the most human alien in all of Science Fiction.  I had worked as a writer on Paramount's Star Trek: Voyager series the year before, and was asked to speak on a panel with the writers of Space:1999.  I don't remember much of what happened during that hour, only that seated beside the late, great Johnny Byrne, Christopher Penfold, and George Bellak, who penned the pilot episode, "Breakaway," I was completely star struck, maintaining quite the happy smile, only one step ahead of the happiest of tears. 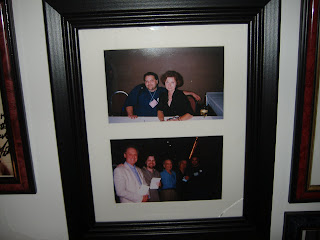 (Me with Catherine Schell, and standing with the writers of Space:1999).

I think if I could go back in time and tell that earlier version of myself, that young writer who was ridiculed and bullied for what he loved, that he would one day meet all of his childhood icons, he might not have been able to survive the shock.  But every day, I see proof and am inspired when I enter my Writing Room and glance up, just to my right.  To date, I have written sixty-one short and long Space:1999 fan fiction stories (some, like the eight-part novella and novel series I worked on from 1998-2002, quite long.  Planetkill 1-8, in which the Alphans alone are capable of fending off a sentient black hole hungry for living worlds, totaled some 1,500 pages when the last word was written; parts of it penned in New Hampshire, in Los Angeles, in Boston at the MFA on a bench before original van Gough paintings, and at a favorite coffee bar in the Berkshire Mountains.  This maxi-series took the Alphans from one end of the galaxy to the other and is, perhaps, that one thing I wrote to think back on during the final reflective moment of my life). 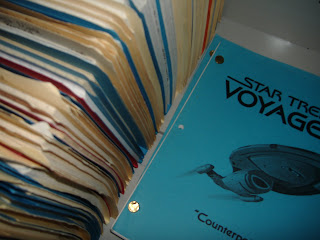 (Above: my sixty-one Space:1999 fan fic stories at left, beside the shooting scripts for the two episodes of Star Trek: Voyager I created: "Counterpoint" and "Gravity.").

During their run of forty-eight episodes, Commander Koenig and the Alphans brought life back to numerous lifeless planets, risked their own safety to help those in need, and never wavered when faced with the seemingly insurmountable.  Perhaps anyone who's stood up to the dark forces of the universe, who's made the right choices even if they weren't the easy ones, who's picked up a fountain pen or a paint brush or has sung in the face of shouts is an Alphan of sorts.  I've learned many lessons over this lifetime spent staring up at the moon thanks to those beautifully-drawn characters, who are as real and noble to me now as they were then.  Perhaps even more so because of our intimate times together in the tales I've written them into since I was that boy of ten.  That loyalty is better than logic, hope is better than despair, and creation is better than destruction.  That there is a purpose, whether relative to distant imaginary planets like Golos, Piri, Zenno, Ultima Thule, Psychon, Archanon, or Arkadia, or as close as the reality of one's own backyard.  That we're all aliens until we get to know one another.  And that we should raise our glasses not to everything that might have been, but to everything that was. 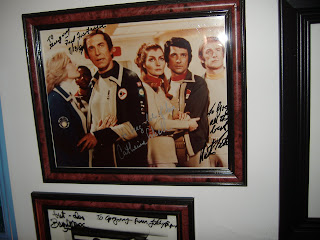