This has been an amazing, adventurous 2016! As of this morning, I've completed 52 individual fiction projects (one novel, a dozen novellas among them), and have traveled far and wide (including to Hollywood, where I attended and received Honorable Mention for my short story "Mandered" in The Roswell Awards). In September -- in addition to getting married -- I enjoyed not one but two productive writing retreats. Both featured returns to destinations I've visited and loved before.

The first took me across the Atlantic to the Isles of Shoals. I enjoyed Dale Finley Slongwhite's wonderful Writelines conference to Star Island once before, in 2012. This time around, Hurricane Hermine had different plans for us, and made the sea so choppy that the Coast Guard grounded ferry service for the first two days of our visit. Hermine be damned, Dale had us gather in a hotel nearby the ferry's launch, and, while we labored over daily updates, we kicked off the workshop in the hotel's meeting room. I loved my last time in Dale's classroom, which was and is filled with fantastic writing exercises designed to challenge and inspire (they did!). I completed a short Viking-themed speculative story our second morning in the hotel and began work on a mystery feature film screenplay (by the end of the island adventure, I had the first full third down). We dined at local restaurants and waited. Early Wednesday morning, we got the news that, long last, we'd be on our way to the island. The voyage across the ocean was exhilarating, inspiring. At one point, the islands surfaced from the endless expanse of gray, and we were there. My room this time around was in the actual hotel and not the outbuildings, and came with the rarest of rare: two plugs. They'd added WiFi since my previous visit and, while checking emails during breaks from the writing workshop, I learned I'd been invited to submit a mystery and a western to two different editors.

The food was great, the company stellar. I dig Dale's boot camp-style approach and left the island two days later with plenty of fresh material -- and two new stories, the first of which I penned the very next morning following my return home to Xanadu. 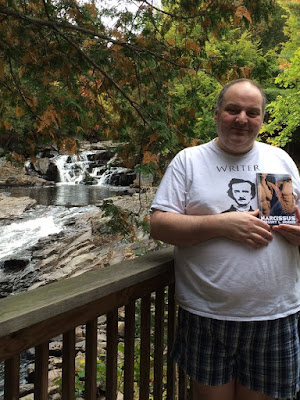 Two autumns ago, our writers' group attended a long weekend retreat to the Waterfall House, a beautiful antique mansard colonial perched atop roaring falls in Stark, New Hampshire. We returned at the end of this September to the house, which was as charming as I recalled. Our first night there, five of us enjoyed an incredible feast of homemade dips, sauces, and jams with cheese and crackers, coconut macaroons, and bakery brownies. For our second night, I slow-roasted a ten and a half pound prime rib from the local butcher shop, and it was incredible! On our third night at the Waterfall House, we enjoyed homemade spinach lasagna and meatballs, salad, and a variety of desserts.

From the moment we landed, I uncapped my pen, poured hazelnut coffee or raspberry seltzer, and wrote. My intention for the weekend was to return home with a briefcase filled with completed manuscripts, and I did -- some 15,000 words between four projects, along with busy work on others. I penned my oldest incomplete project, the novella "Destiny", to THE END, along with two shorts and a longer mystery story, "The Eleven O'Clock Ice Kill." Our weather, though mostly overcast, didn't stop retreaters from taking walks or working outside on the deck overlooking the falls, and, though I left creatively depleted, I accomplished all I hoped for.

In three days I depart for my sixth and final road trip adventure of 2016 -- to When Words Count in Vermont for four days and three nights. I'm bringing a novel, the mystery screenplay, and a handful of short stories to work on. It's been a fantastic year! And 2017 seems poised to begin on a similar high note: while luxuriating last weekend at the Waterfall House, I was approached to pen a novelization of a made-for-TV movie from its screenplay. I've said yes!
Posted by Gregory L. Norris at 10:36 AM