BEHOLD: BEHIND THE UNIFORM! 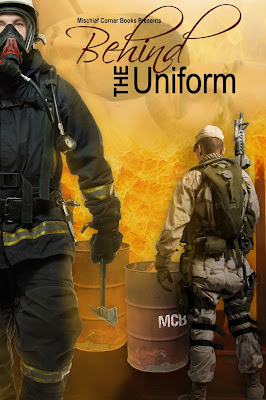 On the night before I departed Camp Necon in July of 2012, I experienced a gritty, intensely romantic dream that left me reaching for a blank note card about a sex worker in a near futuristic war who learns he holds the key to stopping a ruthless alien invasion. That knowledge is delivered by a handsome colonel, who visits the camp where he works. As the dream played out, the colonel took on the face of my beloved muse, and I became Milo Hanover, the seemingly average, unremarkable older man who discovers he's anything but. I even dreamed the opening few lines, along with the title of the tale -- "The Head Shed", which was the nickname for Milo's place of employment and the service both he and it provided to humanity's war-weary defenders. I showered, hastened downstairs to the cafeteria for iced coffee before it was open to serve the wonderful writing conference's attendees, and began work on the story. I gutted out the first thousand or so words longhand, shocked at how formed the world Milo and the colonel inhabited was, and would have continued but then breakfast service started, and soon after I departed Rhode Island for my home in New Hampshire. "The Head Shed" went into a file folder, which then went into my works-in-progress filing cabinet drawer, and its note card found its way into my catalog of unwritten ideas. We bought a house and moved. Other projects and deadlines took front and center -- until this past March when I read about Mischief Corner Books' new submission call for Behind the Uniform, a M/M romance anthology. "The Head Shed" again jumped to the head of the line, and I soon dashed the remainder of what I thought would be a long short story as novella, loving every moment of my time together with Milo, Colonel Joe Dunnegin, their unconventional love, and their desperate plan to drive out the Grunk menace. Following my usual stringent edits, I sent "The Head Shed" off to MCB, who accepted it a few weeks later as one of three novellas for Behind the Uniform. This July, BTU has been published to some incredible kudos -- even before its launch, it became an All-Romance e-Book best seller, and continues to sell mightily post-release (print is due to be available shortly). It was my pleasure to speak to my two BTU co-authors regarding their contributions to this wonderful anthology.

Jon Keys on "It's the Hat": "The anthology subject grabbed my attention and didn't relent. Since I was young I've had a fascination with men in uniforms and their behind the scenes lives. But I already wrote a short story several years ago focused on two married police officers, so I wanted to go beyond the expected and find another field that met my needs. In my research I discovered forest rangers have the highest mortality rate of any of my guys in uniform. So I found my hero. Add to that a recent art school graduate working as a waiter who has a weakness for bad boys, and I was happy with the mix of characters. From there the setting flowed. I've visited Michigan's west coast on numerous occasions, and several items caught my eye. The area's beauty struck me first: Lovely blue waters and wide sandy beaches. The scenery is breathtaking. More notable traits, most of the towns survive from the tourist trade and a lot of those visitors eventually buy a cabin. This was more striking to me because it's so different from the southwest where I lived most of my life. Between all of these, I had the components from which the story grew."

Toni Griffin on "A Wolf in Cop's Clothing": "My short story is actually Book 7 in one of my most popular series. I'm constantly being asked by my readers for more from the Holland Brothers. After I finished book 4, the last in the main series, I said that was it, there wasn't going to be any more. However, the boys just never stop talking to me. As soon as I give them even the start of an idea in my head they take it and run. This is exactly what happened this time. I was sitting at my desk at work one day, checking messages from my author friends in the US. When the subject of the Behind the Uniform anthology was brought up. Men in uniform got my brain thinking about one of the Holland brothers, Marcus, who's a cop. It had been about 14 months since I'd allowed the boys to visit me and as soon as my mind even thought about them they took over. I had a furious messaging session with my friend, and within a half hour the entire story line had come to me and was just begging to be written. I was then stuck at work with this story busting to get out. When I got home that night the laptop was opened and the story flowed. It was written in less than 3 days. I hope you enjoy!"