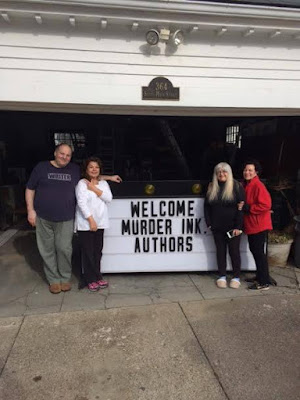 You might have noticed the decline in frequency of my blog updates in 2016. When the year began, my list of upcoming events seemed perfect for new postings -- I haven't traveled or planned this many literary adventures since 2012, before we bought Xanadu, when I spent a grand total of three-plus months attending retreats, conferences, and readings coast to coast. 2016 has been a whirlwind. It's also been filled with a rapid-fire succession of fresh pages and completed projects and, as such, my days have been devoted to putting down the words, hitting deadlines, and carpe diem-ing. But I love keeping this blog active (I often used to wonder about why bloggers abandon their blogs, even wrote a story about it that's gotten plenty of love for the brilliant Suzanne Robb's Read the End First, 'The Midnight Moon'.). So, without further delay, a report from my 2016 adventures thus far.

In late February, I enjoyed the year's first big highlight -- the official launch of the anthology of New England newsroom-based mysteries containing my tale, 'Exhuming Secrets on a Hot August Day', Murder Ink. What was so fantastic about this particular book party was the grandeur in which it was celebrated -- a lunch hosted by the publisher at M. J. O'Connor's, an upscale restaurant beside Boston's famous Park Plaza Hotel. Along with dear friends Judi Calhoun and Sisters Dent, also fellow co-authors, we drove into the city and were treated like royalty at the venue, our luncheon capped off by tray passes of delicious pastries. The day before, Judi and I traveled three hours south to luxuriate at Karen Dent's wonderful and inviting home, and were welcomed by the most fantastic greeting (as seen in the photograph above), courtesy of Karen's husband. Over the course of that weekend, we dined, wrote, and read together. At the signing, I autographed copies of Ink and got to enjoy the company of the anthology's amazing editor, Dan Szcezesny, who brought me up to the microphone with one of the best intros ever. Later while seated at Karen's big dinner table, I flew through fresh pages of a zombie-themed romance that had me writing like a dervish.

I've signed up for three writing retreats in 2016 -- a second trip to The Waterfall House in late September following my wedding, a nature writing-themed retreat to Mount Monadnock in June, and a return visit to When Words Count in Vermont. My time at WWC, March 30 - April 2, couldn't have been more enjoyable or productive. On a bright Wednesday morning, I set out for Vermont with a handful of projects to work on and was borderline giddy when the familiar main house appeared at the left of the road. This time, I stayed in the Hemingway Room (both times before, I was in Arthur Miller -- all the rooms at WWC are named after famous writers). Framed photos of Pappa stared down from three walls, The Hemingway Room desk boasts a glass revolver as part of the decor -- fitting! During that time, I worked on a screenplay, completed three short stories, wrote part of a fourth, and outlined a story assignment (which I later wrote upon my return). My laptop chose to not connect with the center's wifi, so for most of my visit I wrote off the grid. On that Friday, I checked emails on WWC's system and discovered I'd been invited to write for an editor's new project -- horror stories set along desolate highway stretches, had been shortlisted for an anthology I very much wanted to be part of (the story, 'The Night Stalker', has since been contracted for at Blood, Sweat, and Fears: Horror Inspired by the 1970s), and I was invited to write a SF novel for a new imprint out of San Francisco. The food, as expected, was beyond fabulous and included homemade sorbet palate cleansers between courses (coconut one night, lemon rosemary another, orange basil the last night), mussel stew, Cornish game hen, and one of the best cheeseburgers on the planet, the meat, cheese, and bacon all locally sourced. On Friday, I savored homemade tomato soup and grilled cheese with avocado sandwiches for lunch.

This coming Saturday, May 21, I depart on the next adventure, one I hadn't anticipated. Last month, I learned that my short story, 'Mandered', won Honorable Mention in the Roswell Awards in Short SF. I'm flying out to Hollywood to attend the ceremony. The Roswells are particularly prestigious -- and doubly cool -- in that winners get to see their stories read/performed on stage by a number of classic TV and film Science Fiction actors. This year's roster includes Dee Wallace (E.T.) and Jasika Nicole (Fringe). At the ceremony on the 22nd, I'll receive my HM certificate, get to rub elbows with some pretty big names, and celebrate another career milestone. Earlier that same day, I'm planning to make a pilgrimage to 7800 Beverly Boulevard in Hollywood, where my beloved movie Xanadu was filmed. And the year isn't even half done yet. To be continued...
Posted by Gregory L. Norris at 2:55 PM