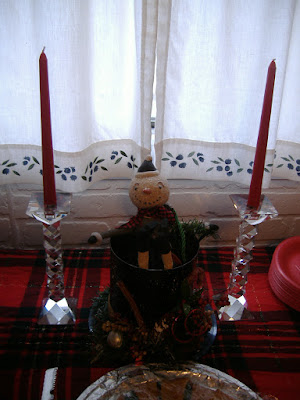 On Saturday, December 12 our little family hosted fifteen of our favorite friends and writers for our annual Christmas Party -- our third since moving north to Xanadu. A brisk, gray morning unfolded the day of the party, though it was considerably less frigid than in previous years. Normally by December, the Russian Winter of New Hampshire's North Country is already here to stay. In 2015, the Polar Vortex seems to be taking its time. There wasn't a single flake of snow to be found anywhere except on the horizon, where the ominous summit of Mount Washington rises.

The house sparkled and was ready by 11 a.m. to receive the first guests. I made the decision not to put up a Christmas tree in 2015. Last year's tree and 2013's were stunners, and I admit I loved decorating with family heirloom ornaments. This year with time and energy focused on so many writing projects, we instead trotted out the funky Goth snowman given to us last year by our awesome neighbor Anne (his hat was filled with treats) as the table centerpiece, and created an 'invisible tree' in the living room to put gifts on and around for the Yankee swap portion of the fun. All morning long, a massive boneless pork roast slow-cooked in the oven. I had whipped potatoes to accompany the roast, jumbo shrimp and cocktail sauce chilling in the fridge, my awesome fruit punch in the big crystal drinks dispenser, and had ordered another wonderful cake from Cote's Cakes and Cupcake Bar, our go-to dessert destination for all writers' group parties and events. 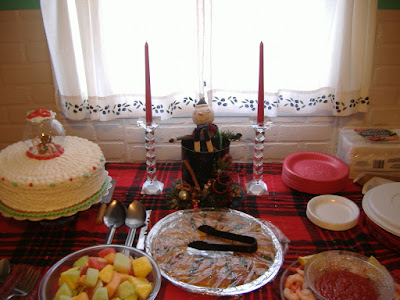 In addition, an incredible buffet materialized, spreading around the kitchen, as is always the way at one of our writers' group parties. We enjoyed: spinach, red pepper, and mozzarella calzone, homemade rolls, a hunter's pie (ala shepherd's, only made with ground venison -- which I normally avoid; this was divine!), Portuguese bread, fresh fruit salad, layered salsa dip with chips, vegan mac & cheese, apple bread pudding, brownies, a gourmet cookie platter, and an assortment of homemade breads -- blueberry, cherry, and fig among them, served on a gorgeous glass platter that we were given following the party. Everything tasted magnificent! 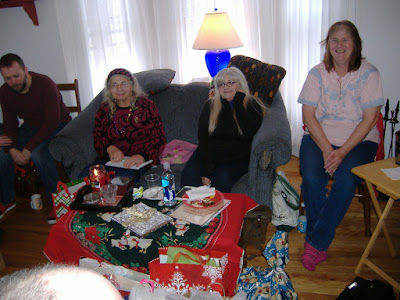 The Yankee Swap kicked off at 1, right as the last of our fellow partygoers arrived. For the first time ever, I drew a number high in the rotation, and wound up snagging a gift basket filled with candy, cocoa, a new coffee mug, pens, paper, and other neat contents. Seeing the paper was what won me over on resisting the temptation to swap -- I've written so much this year that my supply of notepads and notebooks has dwindled to a not-quite-but-getting-close point of anemia. During the reading portion that followed, I shared the opening half of my Viking-themed story, "The Hungriest Month", and got to enjoy some fantastic offerings from my fellow creatives -- what more than one attendee agreed was the best reading at one of our parties ever. By 6:30, the last of our guests departed, and our 2015 party schedule came to its end. Next up: May 2016 -- theme as yet to be determined, followed by September 18, 2016, whose theme will be "Marriage" to celebrate Bruce's and my nuptials, which will occur before the start of the party.  Huzzah!
Posted by Gregory L. Norris at 10:09 AM