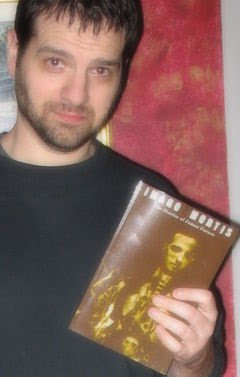 Part bad boy, all bad ass, it was my pleasure recently to discover the words and passion of author James Ferace.  An exciting new voice in dark fiction and poetry, Ferace's work engages from the start, whether in short story format (Imago Mortis: The Stories of James Ferace) or verse (Somnambulism: The Poetry of James Ferace, containing eighty-eight original poems).  Blending elements of the Gothic, the Beatnik, the best of Poe and Kerouac alike, Ferace has created a compelling literary style uniquely his own -- and one not to be missed.

The Connecticut-based scribe invited me to his corner of old  for a glimpse into the wonderfully dark imagination of James Ferace.

Tell us about yourself, James.
Well, I've been writing since I was about twelve.  I'd always been plagued with horrible nightmares ever since I was a child and I used writing as a form of therapy.  However, it wasn't until many years later, at the urging of my friend, artist Steven Lapcevic, that I start putting my work out there more.  So around 2009 was when I released my first eBook, Eternamente.  I was very pleased with the response, so I continued releasing eBooks until 2011, which is when Imago Mortis was published in paperback.  I've also written for several magazines (under a pseudonym) and I was also profiled in the October 2010 issue of Pulse Magazine in the article "Inside the Dark Mind of Writer James Ferace."  Poetry had always been my first love when it came to writing, rather than fiction, so it was at the urging of my editor to put together a poetry collection, Somnambulism, which was released much later the same year as Imago.  It didn't have quite the impact, however, as poetry is a bit of a tough sell.

Take us into your home office/work space -- what is it like?
Believe it or not, my work space is usually just me sitting on my bed with my laptop.  Nothing fancy.  I usually dream up most of what I write, so it's appropriate, in my opinion, that I also turn it all into fiction while sitting in the same space where most of it comes to me.  My room is small, but I prefer it that way.  It's cozy and everything is practically within arm's reach.  I'm a big fan of film, so there are several posters adorning the walls, such as ones for David Lynch's Eraserhead, my favorite film, Martin Scorsese's Taxi Driver, and David Cronenberg's Naked Lunch.  I also have art by Francis Bacon, etc., which inspires me. 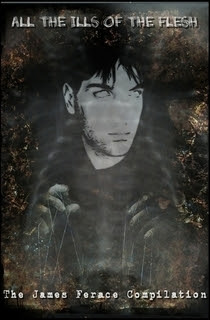 What does a typical James Ferace writing session involve? Tell us about your creative process.
Usually, I just sit down with a cup of coffee or tea, take a deep breath, close my eyes for a minute or so, and let the ideas just flow.  Once in a while, I'll put on a film for inspiration -- usually a silent film so that I'm not too distracted.  On a rare occasion, I'll even go to a library and write in longhand in a notebook.  The silence coupled with being surrounded by the works of so many fantastic authors throughout history sometimes breeds creativity in me.  This isn't often, but I'll sometimes even keep my eyes closed as I'm writing.  It sounds strange, but that's when I feel I'm most in tune with my subconscious and I feel that aids in the whole process.

In Imago Mortis, your short story collection, you go to one of my least favorite and creepiest places on the planet: the cellar. Did your nightmares inspire you to write the stories in the collection?
Strangely enough, rather than coming from some deep-seated desire to create it, the collection came from so many people telling me they wanted to read my stuff on paper, rather than in eBook form.  It seemed like a daunting task at first, which it was, but I'm happy I did it now.  As much as I hope people appreciate my odd little creations on their own, I think there's some benefit to absorbing them all together, as well.  Reading it now, in retrospect, I would have removed certain stories and arranged things a little differently, so that the whole thing flowed better and turned out a tad more cohesive, but...I'm still proud of it as a first effort.  I was surprised at the response to it, honestly.  There were things contained within its covers I thought people would have me run out of town for writing, but then I spoke to many individuals who said those were their favorites!  I'm pleased, though.  I'm pleased that my material can affect people the way that it does.  As you mentioned, I tend to go to some pretty dark places and it's always an honor when someone's willing to go along for the ride. 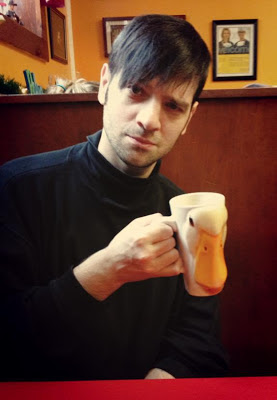 What do you have in process?  New releases?
After Imago and Somnambulism, I returned to writing eBooks.  Somewhere along the way, though, came All the Ills of the Flesh, which was basically Imago and the poetry collection together, with some new material thrown in, but in a hardcover package.  Of the three items I have published in physical form, I'm most proud of that (and I owe a lot of that to my fantastic editor, Amy Wells).  But, right now, in addition to several new eBooks, I'm also working on a brand new softcover collection which is a sort of Imago Mortis, Vol. II, if you will.  I'm hoping to have that done by the new year.  I'm extremely pleased with the way it's turning out and I think it's going to be superior to its predecessor in every shape and form.  Reading through it, I also noticed that I feel I've grown a lot as a writer, something which also pleases me.
What was your ! moment -- when you knew you were a writer?
I always wrote.  I wasn't aware that I was 'a writer,' however.  I think that moment came when I finally exposed others to my work and saw their reactions to it.  Because anyone can put a bunch of words down on paper and that can mean to them whatever they want it to, but...when people started seeing this stuff and conveying that it actually moved them, disturbed them, sickened them, or made them cry, that's when I knew.  It was literally one of those 'I was born to do this' moments.  So I guess it wasn't really one particular instance, but several which slowly built up over time.