Since 1980, that same storied year when I became, in my heart, a writer, I've had this thing about office supplies.  My German teacher, Frau Macintyre, labeled me her "kleinen Papier Dieb" -- her 'little paper thief' -- because I was always asking for sheets of lined paper upon which to compose my stories.  I discovered my beloved Sheaffer fountain pens that same year and, until this past March during a big trip out west to attend an event that required flying, used them exclusively (fountain pens are not only frowned upon by the TSA but have a tendency to regurgitate all their ink due to cabin pressure, a messy situation regardless).  I found a great and inexpensive brand of pens that offer all the beautiful results of the Sheaffers at a fraction of the cost and, earlier this month, I stocked up.  Each of my new pens gets a hundred pages down before they start to fade.  I'm hopeful that between these new instruments and the classic ones whose replacement cartridges I bought en masse in 2011, going forward I will never run out of ink.


Three weeks ago, our local big box office supply store did a number on this little paper thief by putting several cases of lined white paper on sale at a ridiculous discount.  When all was said and done, I lugged home some ninety pads of the stuff, fifty sheets per pad.  Factoring in the blank paper already on hand, I've got more than enough to satisfy the creation of every first draft of all the as yet unwritten stories, long and short, hanging around in the ether (and archived inside my catalog box of ideas). 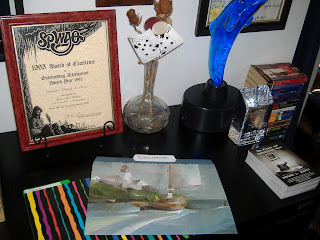 I discovered I wasn't a manila folder type over a decade ago and have since filled my lateral-drawer file cabinets with colored and designer folders.  Like Stanley Kubrick and his boxes, my office supply obsession for decorative file folders has grown and shows no sign of ending.  Some of my newest and favorite designer folders are "Neon Stripes" and "Schooner," both recent birthday gifts. There's something exciting about opening up a drawer and not going snow blind; instead seeing what amounts to the literary equivalent of a big jewelry box filled with gemstones and treasure. And I like assigning each completed first draft of a story, novella, or novel a method of storage appropriate with its personality -- Romance in bold red, Horror dressed in basic black.  A summer story in "Schooner."  A tale of modern Internet warfare in "Neon Stripes."


I find great joy in the simplest of things, like writing in our lovely living room with a tall iced coffee and our cats, one seated on either side, being read to by my fellow writers, listening to an old episode of a beloved television show that I taped off the TV on a cassette thirty-five years ago.  And my favorite office supplies, lots of them.  Enough to satisfy the needs of a lifetime's creativity.
Posted by Gregory L. Norris at 9:01 AM