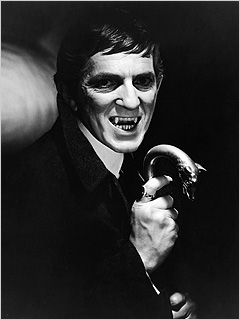 There are points where we turn in one direction, and our entire life alters -- had we gone the opposite way, our worlds would be completely different.  For me, the major turning points involve a September night in 1975, seated in front of the television; a trip to the movies with my group of high school friends on a balmy late August night in the summer of 1980 that amounted to the biggest permission slip of my life: to be what I wanted most, a writer; quitting a thankless job I loathed for a creative career and literary lifestyle I love, July 1991; my first writing retreat, Wentworth Mountain, October 1993. Before the first of those times when my life turned in the correct directions, leading me to this present morning in the then-unthinkable year of 2012, there was Dan Curtis's brilliant and dreamy daytime soap opera, Dark Shadows, which ran from 1966-71.

Set in fictional Collinsport, Maine, DS followed the week-daily travails of the cursed Collins Family, whose extended membership included werewolves, ghosts, witches, Franken-humans, Lovecraftian old gods, and bloodsuckers.  Most celebrated among the drama's paranormal players was Barnabus Collins, the 175-year-old vampire played so seductively by Jonathan Frid.  Sporting the best windswept haircut ever, an onyx ring, and a silver wolf's-head cane, Frid's Barnabus was suave, mysterious, and supremely handsome.  Barnabus Collins didn't turn me gay but, at so early an age, his masculine elegance unleashed powerful emotions that helped me to understand and embrace my sexual identity -- not so easy a thing given the time in which I grew up.

On April 13, 2012, Jonathan Frid passed away, less than a month before the premiere of the new Tim Burton big screen parody of Dark Shadows, in which the late, great actor reportedly boasts a brief cameo.  General consensus regarding the film is that we fans of the original will either love it for what it is, or hate it for what it isn't.  Regardless, until I join Mister Frid beyond the veil in whatever afterlife awaits, I will always love him for contributing mightily to what has been a very happy, well-lived life -- and part of me will ever be in love with the immortal character he brought to life in the role of Barnabus Collins.
Posted by Gregory L. Norris at 6:26 AM