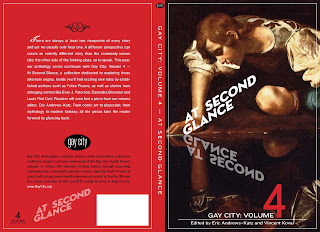 In late 2010, during a particularly trying time for me and my small family, I woke from a haunting dream about a persecuted population relocated to a hostile and barren island; that events following the Stonewall Riots had turned in a different direction, and one of the many ugly results was a political landscape known as the Anarchic States.  Some of the country's brightest minds had been forced into a desolate existence on that island which, in the dream, was referred to as Lost Hope. Knowing it was only a matter of time before their persecutors from the Anarchic States returned, the citizens of Lost Hope set about creating a spectacular winter carnival, seemingly having accepted their fate.  But the society was planning for the end, and had secretly staged a desperate plan to fight back when the time came.  The events of my steampunk short story, "The End of an Era," written a week or so after the dream during a month-long period of hell on Earth when our small family, too, was forcibly relocated from our home and placed in a supremely hostile environment as we worked to fix financial and medical issues, is fairly accurate to its original unconscious creation. Its characters, from the frightened to the heroic, resonated clearly and haunt me to this day.  Over the summer, I submitted a hard copy via snail to editors Eric Andrews-Katz and Vincent Kovar, who were reading for the fourth volume of the popular Gay City series.  This latest, At Second Glance, would explore the what ifs of established historical events by showing them from a different angle.  A month later, I received my first paper acceptance letter in years and was thrilled last month to hold my contributor copies of the realized project in hand.  Not only does At Second Glance contain an unexpected mix of wonderful stories and styles -- with my little steampunk tale about beautiful souls triumphing over a ruthless military's iron fist sandwiched between some truly great writers like the brilliant Felice Picano -- but it has also contributed to making our world a better, brighter place though literature.

I had the pleasure of speaking with Mister Kovar and Mister Andrews-Katz about At Second Glance and what they have planned next up for readers of the Gay City line.

Vincent, this is the fourth Gay City volume -- can you discuss what's come before, and how you got involved with publishing the series?
Gay City Anthologies has been such an interesting journey. About five years ago, I approached Gay City Health Project with the idea of launching a literary journal. My initial proposal was inspired by the New York-based magazine Christopher Street and I had grand dreams of founding a quarterly periodical. However, after digging into the logistics, I switched gears and decided to create a multidisciplinary anthology instead. Maybe it was a burst of hubris but I sub-titled that first effort, "Volume One" in anticipation of making a series.