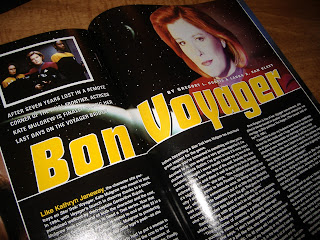 Long before interviewing the courageous leading lady of the Intrepid-class Starship U.S.S. Voyager some several dozen times over the course of the fourth live-action Star Trek series' seven-year run; well before creating two episodes of the show with my talented best friend and writing partner Laura A. Van Vleet -- the first, "Counterpoint," the ultimate "Captain Janeway" episode and one beloved by the actress herself; Kate Mulgrew was already one of the galaxy's brightest stars in my eyes. I'd loved her as a young adult in the Remo Williams flick and before that as a youngster when she played Mrs. Columbo, and especially for her role in the soap Ryan's Hope, which most of my family was hooked on.  I thought she was beyond cool during my stint with Laura writing features for the Sci Fi Channel's Magazine, on the Voyager set, at the famed Copacabana Club in New York City where we once attended a charity event put on by Ms. Mulgrew to raise funds for the Incarnation Children's Center, a pediatric A.I.D.S. home (Laura and I donated our very first Kate Mulgrew interview paychecks to the ICC in honor of the actress's work, something she never forgot and, as a result, she was always available to us for a chat, an interview, a hug when our paths met in the real world). 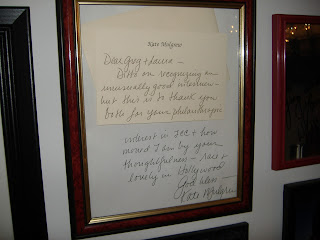 But talk about coolness elevated to new galactic heights!  Early this past autumn, I approached Ms. Mulgrew regarding a blurb for my forthcoming monstrosity of a collection, stories short and long, which is being launched at World Horror Con in Salt Lake City in March, and she offered her support without hesitation.  This is what the actress, whose character took down the entire Borg Collective; who safely returned her ship and her crew through 75,000 light years of hostile, unexplored space, and who created one of the most memorable heroes in Science Fiction history, has to say regarding Muse:


"In my experience of seven years on Voyager, I do not believe I have encountered a writer for whom I have greater respect in terms of intelligence, understanding, and talent.  There is no one more capable to pen such a volume as Muse and, also, to do it so beautifully." 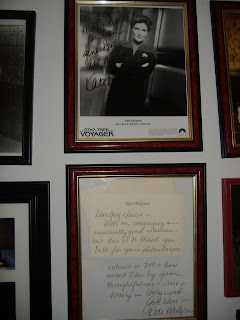 -- Kate Mulgrew, Star Trek: Voyager
Writing Muse, which contains twenty-six original short stories and novellas (twice the original total, as first envisioned by the publisher when I was asked to pen the collection), has been a great adventure.  I can't thank Kate Mulgrew enough for sharing it with me.
Posted by Gregory L. Norris at 2:20 PM