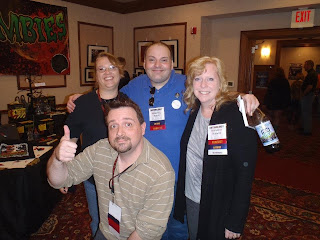 (Me, nestled among, from right to left, Hollie Johani Snider, Peter Giglio, and Marianne Halbert)

The first Anthocon has come and gone and, by all signs that count, the event was a smashing success.  The weekend, held in Portsmouth, New Hampshire and celebrating all-things-spec fiction and the related arts, attracted huge crowds comprised of celebrities, readers, writers, and some of the finest folk you could hope to meet.  It was with a great sense of anticipation that I traveled from my home early Saturday morning east to Portsmouth to meet with the finest of those fine individuals. From the instant I moseyed into the diner attached to the con's hotel venue to join Peter Giglio, Charles Day, Henry and Hollie Snider, and Marianne Halbert for iced coffee and eggs benny, I knew I was among the best of friends and some of the most talented writers one could hope to rub elbows with. 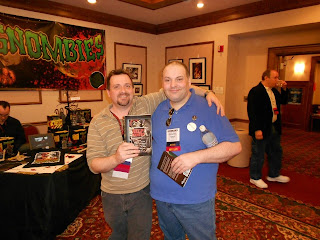 (with Peter Giglio, author of Anon and A Spark in the Darkness -- and HELP! Wanted)

Something magical happened at Anthocon, the sense that I was not only among great and talented folk, but that a random convergence in a writing conference setting wasn't so random after all.  I had appeared in print numerous times with Marianne Halbert and had loved reading her ultra-creepy story 'Neath Fallow Ground' in my contrib copy of Back to the Middle of Nowhere; I knew the fantastic Charles Day as both himself -- publisher and Top Honcho at Evil Jester Press, fellow scribe, and all-around great guy -- and as his alter ego, The Evil Little Jester.  I'd been constantly amazed at Ms. Snider's insightful and engaging posts in various forums, and also her fabulous fiction.  And her other half, Henry, for his wonderful IMs on Facebook and through his work, as well.  As for Peter, you can say I've been a rabid fan of both his work and his character from the moment we first spoke on the phone last May, when he called to touch base regarding my submission to HELP! Wanted, the anthology that brought us all to Anthocon in the first place.  From the moment I landed, I was inspired by and fell madly in love with these wonderful writers, all of whom turned out being light years beyond the lofty esteem where I already held them. 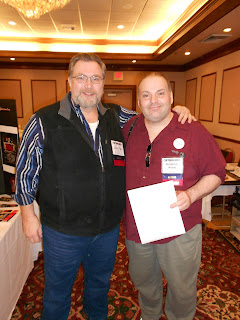 Also during the fantastic weekend where I appeared on two panels -- "Selling Short Fiction" (for which my audience received handouts detailing Ten Tips for Successful Fiction Selling) and one devoted to EJP, where I and my fellow panelists discussed our stories in HELP! Wanted -- I met such heavy hitters as the gracious Jonathan Maberry, and some of today's rising stars, like David Bernstein and the talented Jon Michael Emory, whom I have the pleasure of appearing with in the forthcoming release by Wicked East Press, Tales of Terror and Mayhem From Deep Within the Box.  I signed dozens of autographs and was interviewed by Phillip Perron for his Dark Discussions podcast.  There were lunches and dinners, long and engaging discussions on the writing life, scheduled readings and, even better, one held in the Sniders' room where I and my fellow way-cool writer chums read our work well into the night.  And the morning.  At midnight, the hotel kicked us out of the Sniders' venue for being too loud (rebels!), and we concluded in the lobby somewhere around two in the morning.  Three hours later, I was up, showered, and writing the next installment of "The Cycle" (scheduled to appear in the bigger, badder version of my EJP collection of short and long fiction) in the diner.  Later that afternoon, the conference wrapped, and I returned home, where I cooked a vast spread to welcome my lovely fellow EJP luminaries for dinner, dessert, another reading, and that night's episode of The Walking Dead on the flat screen in our living room. 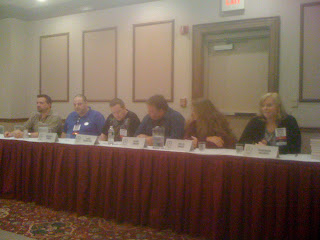 The conference was a tremendous opportunity to interact with other industry pros, readers, and to be energized anew by this profession we all love and which should be celebrated.  And it was here, in my very own backyard, for which I am tremendously proud.  I can't wait for next year's gathering and fully expect to enjoy the company of the talented and genuinely wonderful scribes I got to meet in the flesh, each one a gift and source of inspiration.  I am counting the days!
Posted by Gregory L. Norris at 5:09 AM