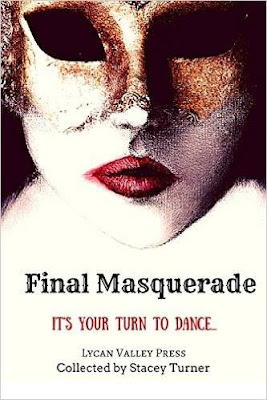 A few summers ago, I gave myself permission to spend almost two weeks in June free writing -- the act of putting pen to blank page and just allowing my writer's imagination to wander. From those weeks, a plethora of completed first drafts emerged -- a Western for one of my publishers in Germany, a dystopian tale that sold on its first time out to another, and several flash tales. In and among that wonderful time of creativity, I penned a story about a woman who'd suffered from blood cancer, declared healthy following a radical procedure but with little memory or proof of the actual treatment. At night, she's haunted -- and taunted -- by images of a man in a cage with silver bars. "End of Nights", like the other stories written during that warm, bright spell, jumped from pen to page, and then its first draft went into my filing cabinets for possible future submission.

Two summers later, I pulled out the manuscript and submitted it to Lycan Valley Press's newest anthology, Final Masquerade. The project's wonderful editor, Stacey Turner, accepted "End" with a request for a little tweaking to the ending. That was a gray and humid Sunday. Lightning crackled and thunder boomed, and, rarest of rarities in this part of New Hampshire's North Country, we lost power. And so, by the waning battery charge in my laptop, I tackled that minor rewrite -- and actually scared myself as the storm raged outside!

Several of my talented co-authors shared the back-stories behind their stories in Final Masquerade.

Joshua Chaplinksky on "Mummer's Parade": "I wrote the original version for a different themed anthology, one about clowns. I figured there’d be a lot of Pennywise-inspired killer clown stories and I wanted my piece to stand out. I had the idea of mummers in my head (probably from reading Game of Thrones) and discovered there was an actual thing called the mummer’s parade, so I started doing research into that. That led to the idea of masks and ‘animals with human faces.’ The opening came to me pretty early on -- Triboulet was known throughout the realm for having the King’s ear. He wore it around his neck on a silver chain -- and it just got weirder from there. Ultimately the story was rejected, which was fortuitous, because it was too short and I am much happier with the final product. When I came across the Lycan Valley anthology call, I knew it was a perfect fit. I’m glad they agreed!"

Samantha Lienhard on "The Artist": "When I first wrote ‘The Artist,’ it was a very different story. I’d heard a criticism of someone as not being a ‘real artist,’ and that inspired the initial version of Ian -- a bitter, arrogant man out to ruin the artist whose work got more attention than his. I wrote this story, and while it covered the same basic beats as the version in Final Masquerade, it had one major problem: neither character was likable. I took ‘The Artist’ to a critique session at Seton Hill University, where I was working toward my MFA in Writing Popular Fiction. During that critique, I not only realized this flaw, I also saw how Ian could be sympathetic. I altered his past and revised the story through that lens, which led to the version you see today."

Brian C. Baer on "Make Believe": "My girlfriend is a big fan of scary stories. Anytime she is doing homework or housework or just dozing on the couch, she's listening to them. Her phone is constantly playing the spooky, supposedly real life tales read aloud on podcasts like "Creepy Pasta". I decided to write a story for her but quickly ran into trouble. She was only scared by gritty stories of psychological torment and life-or-death panic, and those were well outside of my creative wheelhouse. As I kept hammering away at the various drafts, more and more of my own interests leaked in. I added all-night dive bars, a noir-ish sense of sarcasm and cynicism, and a love of the schlocky slasher films of the 1980s. The disparate elements all merged together in an unexpected way. ‘Make Believe’ became a story of existential horror, of being terrified of the randomness of real life. It explored what bizarre lengths mankind will go through to find some kind of order. I finished the final draft, and I loved it. Then I read it to my girlfriend. She said it wasn't scary enough."

Naching Kassa on "Hero": "‘Hero’ is a story near and dear to my heart. My father was an Army veteran and a dog trainer. When he passed away in 2014, I became involved with a charity called Operation Dog Tag. The purpose of ODT is to provide veterans who suffer from PTSD (Post Traumatic Stress Disorder) and other disabilities, with a dog who will assist them in routine activities. Not only is the dog a helper, he is a companion and friend. I wrote ‘Hero’ to honor these service dogs as well as the veterans they love. Sarge, the narrator of the story, is a German Shepherd dog. He’s based on my dad’s dog, Ranger. Ranger was one of the best dogs I have ever known. He was brave, strong, smart, mischievous, and loyal. Sarge is loyal too, loyal to a fault. And, it’s his love for his master and his mistress that leads him into the final masquerade. I hope you enjoy reading this story and that you will take time to honor all veterans, whoever they may be."

D. S. Ullery on "Delivery": "In the grand tradition of EC Comics titles such as The Vault of Horror or Tales from the Crypt, my stories are frequently morality plays disguised as horror. I was wondering what to write about next when I saw a news item about a serial rapist. I got to thinking what sort of Hell would await a man like that. Once I began to apply the notion of ironic justice to the equation, all manner of wonderfully dark things started cooking inside my frankly twisted imagination. I hit upon the notion of having him experience the same degree of torment he exposed women to from their perspective, while feeling helpless the entire time. From that, my little monstrosity was born."

Sheldon Woodbury on "The God of Flesh": "I’ve always been attracted to characters that engage in horrible acts, but do so out of an emotional need we can all relate to. Stories that are just about a mindless monster or a cartoon villain are easy to dismiss. But real horror is when you realize you’re never truly safe, because bad things can happen in the most innocent of places, and the cause might even be you.  I came up with the title first, then the idea of a surgeon as the main character came next. If you want guts and gore, they’re bloody warriors fighting death every day. That takes more than a little arrogance to believe that you have the godlike skill to cheat death. The story began with a simple question. ‘How far would you be willing to go for the person you love?’ ‘The God of Flesh’ is a horror story, but it’s also about the power of love."

Adrian Chamberlin on "Urban Renewal": "The Green Man and its mysteries is a subject that has long fascinated me, as can be seen in my 2011 novel The Caretakers and the short story ‘The Spirit of Summer’ (in the 2013  collection The Dark Side of the Sun). I also love writing post-apocalyptic stories, and exploring how humanity either thrives or destroys itself under such extreme conditions, when new standards of morality have been established. With this story, I wanted to put a new spin on the Green Man mythos and explore what really lurks beneath the mask of civilisation when the bombs have long since dropped and mankind believes itself to be redeemed. ‘Urban Renewal’ takes place in a post- apocalyptic Britain where social divisions are stark, and the few areas that survived have raised barriers -- real and imagined -- between their prosperous lands and the industrial areas blighted by nuclear destruction. The relationship between humanity and the natural world has become perverted, twisted; a promised land for those who believe themselves to be superior, even blessed. This new civilisation is merely a mask that hides the dark nature of humanity, and as is always the case, it is the innocent who suffer -- we see this in the alienation of the orphan boy from the wasted lands who arrives at the new boarding school in this seemingly bucolic paradise; he is alone, alienated and isolated, but has a unique artistic talent that peels back the fake mask of beauty and order to reveal a primal force of nature that too has become corrupted. It is the eve of May Day, and the schoolchildren have been tasked with creating models of the Green Man, an iconic image that appears in churches and cathedrals throughout Britain; it is an archetype of humanity’s connection to the natural world. What the boy creates reverses that. It is a mask of the Green Man in retreat, composed of scrap metal and dangerous materials from the devastated lands of the apocalypse that he once called home, and an act of malice from one of his schoolmates awakens the power within the icon -- and himself."
Posted by Gregory L. Norris at 12:09 PM