Salt Lake City is a beautiful destination, nestled in the palm of a snow-capped mountain range, filled with energy and newness and a hip urban vibe.  I woke early the next morning, Friday, feeling some of that energy and newness despite long flights and a longer drive to attend World Horror Con 2012.  Showered. Dressed. Moseyed downstairs to the hotel's restaurant with my Italian leather valise and plenty of projects to work on.  Ate a monstrous breakfast buffet and then set about integrating into the wildness that was WHC.

Throughout the course of the day, I manned the EJP booth, where I got to meet fellow scribe and Evil Jester Digest luminary Aric Sundquist.  We talked the writing life while such famed bylines as Joe R. Lansdale and John Skipp wandered the Dealer's Room aisles.  Aric is super-passionate and our enthusiasm for the writing life is clearly cut from the same cloth.  Also had a nifty chat with Ryan Daley, senior contributing writer for the big, bad Bloody Disgusting-dot-com, a Web-based horror news giant that routinely attracts a million monthly readers.  Wrote some more.  And then some.  By the afternoon, I seriously needed a nap and indulged.  When I woke up, my roommate, Charles Day (EJP owner and all-around awesome guy) reminded me that I and the gang were due to flock to one of the city's eateries, the Blue Iguana.  We set off on foot on a sultry late afternoon, eventually found the restaurant, and waited to be seated -- a running theme in SLC's downtown due to the aforementioned vibe and enthusiasm.

Back at the hotel, preparations for an EJP book party that would have included Muse were kyboshed by weird scheduling and a different sort of party atmosphere.  Local SLC media, alerted by me to the convention's presence, expressed great enthusiasm for my book and the con in general (most were unaware -- seriously, WHC, you need to make better efforts at publicity).  Even so, Muse made the local papers.

Saturday morning, I woke up feeling refreshed and focused.  Another big breakfast downstairs and then I set about working on my new novel, The Zoo, and more of the ancient novella exhumed from my card catalog, "Golden Skull," which was proving to be delightful.  Spent part of Saturday snuggled in bed with tons of pillows behind my back reading through my fresh copy of Muse and feeling every bit the proud parent.  While the Bram Stoker Awards unfolded downstairs, I ordered perhaps the best cheeseburger in history from the hotel restaurant and spent the night in bed writing and watching a movie on the room's flat-screen TV.  Sunday, I met filmmaker David C. Hayes for breakfast and we had ourselves an old-fashioned Hollywood pitch session over my script, "Bully." David's panel on screenwriting at ten that morning was fantastic.  I left both it and the panel on writing groups hosted by Henry and Hollie Snider invigorated and inspired.

Early Monday morning, Peter Giglio and I packed up for the long return drive back to Lincoln, Nebraska.  While motoring out of Utah was a dream, the moment we hit Wyoming serious trouble in the form of prairie snow challenged our progress.  By the Green River (setting for my western romance "Incident at Yellow Rock"), the conditions degenerated to near white-out and well past dangerous.  Buttes hovered out of focus like giant ghosts.  We passed three horrific crashes, including an eighteen-wheeler hanging precariously over the edge of a steep precipice.  The going was slow and tense; eventually very late that night, we rolled into Lincoln.  I passed out, woke up to a sunny travel day home, and departed again for New Hampshire. 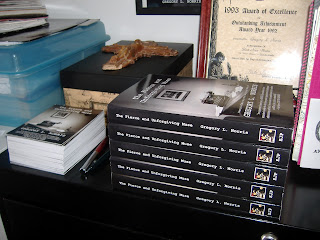 With six copies of Muse in my luggage, it felt like I was carrying bricks.  Clearly, the TSA thought something was amiss, too, as I discovered that they'd searched my bags and left me a 'Dear John' letter on top of my neatly-folded undergarments.  I returned to family and home -- and an enthusiastic muse despite his never leaving my side during my adventure to the wild, wild American West.  The jet lag was worse than anything I had ever experienced during the years I routinely flew to one event or another, but I came back with three new story ideas, an invitation to submit to a magazine, a short story anthology, and interest in my screenplay. I also came home ready to write -- and have written nonstop!
Posted by Gregory L. Norris at 8:56 AM