Most of the music I love is readily available on the Oldies channels now that songs from the '80s are officially considered 'classics'.  There's very little new that I like on the radio anyway, satellite or FM. Ditto for TV shows.  I'm a creature of habit.  An old dog.  It is what it is and I'm okay with it, mostly.

For thirty-two years, I have written with the same wonderful Scheaffer fountain pens I began collecting in 1980 at the age of fifteen, after a daily sum of fresh story pages that hasn't been repeated since and likely never will -- fifty in total -- transformed my right hand into a claw.  The Sheaffers are elegant, comfortable and, given our long history together, beloved.  They glide across the page. I only get writer's cramps from them when I have the rare thirty-page day.  But as I learned in 1991 while flying to Chicago to attend my very first writing conference, cabin pressure at 30,000 feet tends to force all the ink out of the nib, making for a heck of a mess.  Given current TSA regulations regarding pointy things in carry-on luggage in our post-9/11 world, now they're even more impractical to fly with.  With eight full days far away from home during my recent trip west, I knew I needed to learn a new trick -- and fast. And with the state of publishing ever fluxuating, I also figured it wouldn't hurt to adapt to one or more creative changes.

So at our local $ store, I picked up a pair of thick rollerball pens, black.  As stated, I hadn't written fiction in anything but the Sheaffers, of which I own some three-dozen, in decades.  To my surprise while seated at a restaurant in the Newark, New Jersey airport, my dollar store pen moved with the grace and ease of my beloved fountain pens; during the first of two long layovers, I put down seven pages of "Golden Skull," a story that dates back to 1982 and almost to the start of my passion for writing, a novella starring Jonathan and Grace Martin, the husband and wife supernatural sleuth team who starred in numerous creepy adventures during my teen years. 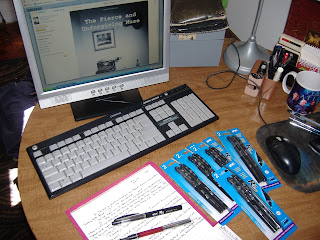 Upon returning home from the trip, I promptly completed "Golden Skull" and returned to the $ store, where I snagged a healthy supply of the rollerballs.  The price of replacement ink cartridges for the Sheaffers has skyrocketed in recent years -- as high as six bucks for five tubes, each tube delivering roughly twenty pages.  The first of the rollerballs just began to dry up after almost a hundred.  While I still adore my Sheaffers and have used them off and on since World Horror Con, I've gone out of my well-established comfort zone and found something else that worked, which is good business given the economics. Of course, I still get looks of bemusement whenever most people learn that I write first drafts with a pen.  Talk about old school!
Posted by Gregory L. Norris at 10:45 AM