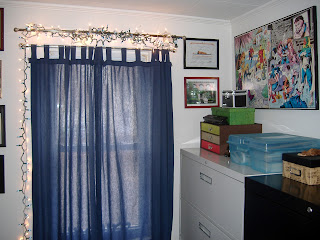 Eight months ago, I set about assembling a sizable collection of original stories, short and long, for my publisher and editor at Evil Jester Press. Early this month, I turned in my final thumbs-up on the manuscript's galleys and the book has since been released in both digital and print versions.  For two fantastic days last week, a special promotion put The Fierce and Unforgiving Muse: Twenty-Six Tales from the Terrifying Mind of Gregory L. Norris at the #1 spot on Amazon Kindle's Short Story Collections best seller list (it made it to #9 overall in the Horror category), where it leapfrogged over both Kipling's Riki Tiki Tavi and the collected works of Mark Twain.  Muse was with me intimately for a long time in the physical and spiritual senses; I set out to create a 'greatest hits' vibe with it and, so far, the early reader reviews have been stellar.  But while writing the collection, dust and cat hair collected, as did the latest contracts and pay stubs in piles, files of longhand manuscripts, and contributor copies, too.  A wild sense of mayhem cropped up in what I consider the heart of my home in a way that's rarely, if ever, been allowed.

As most of my friends and colleagues know, I love a clean living space -- and a spotless work environment even more.  An uncluttered home in the physical world does benefit the cerebral, making it easier and more enjoyable to put down the beginnings, middles, and ends of work I'm proud to have bear my byline.  That, and I'm a compulsive neat-freak, always have been.  But during the creation of so much fresh material for the collection (and the numerous other projects I worked on in and around Muse), the condition of my writing room suffered. With my baby published, yesterday I poured a tall iced hazelnut coffee, called up a spooky old flick on the computer screen, and set about putting things to rights to a degree my home office hasn't seen since last November. 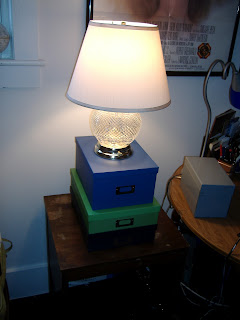 New storage boxes I fell in love with finally found their correct places, as did new strings of cheery white and blue mini-lights, replacing ones that went supernova in January.  Every surface and object in the room got dusted -- our two wonderful rescue cats spend their days lounging in here while I write and edit, so my Writing Room needed to be 'shaved' as well.  All the latest contributor copies (I had nine anthologies containing my short stories and novellas released from December 2011 into March of 2012) went into the archives, floors got scrubbed, the rug vacuumed.  All of my artwork -- and there is plenty, especially on the 'Muse Wall' of celebrity autographs beside my desk -- got a polish, as did the windows, lamps, and light sculpture.

I filed all of my paperwork, and then spent another half an hour or so filing files containing more than a few months' worth of the latest manuscripts -- some, the original drafts of novellas and short stories penned specifically for Muse.  Indoctrinating them into my lateral filing cabinet drawers, which contain some thirty-three years of manuscripts, felt liberating and uplifting.  While I have yet to hold the print version of my baby (that's still some forty-eight hours from now), it felt like I had completely put the collection to bed -- and done something with this book that would make any writer supremely happy. 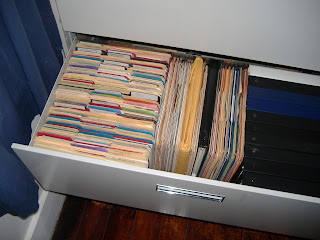 Files filed.  Not one stitch of stray paperwork -- or paper -- anywhere to be found.  Dust dusted.  Crystals and lamps and objects d'art sparkly.  Lights lit.  Order and organization reestablished. Spring cleaning done.  I've spent the last several months working on this monstrosity of a collection -- Muse weighs in at a very hefty 170,000-plus words and, as my wonderful senior editor jokes, would be suitable as a weapon of choice should one come up against the living dead and find themselves needing a blunt object with which to bash in skulls.  I've also done plenty of soul searching and reevaluating since the last weeks of 2011, mostly about the kind of writer I wish to be and the literary life I've always wanted to live.  Spring cleaning in the bigger picture this year has been singularly productive and I hope that literary life will continue with a minimum of roadblocks and red tape. 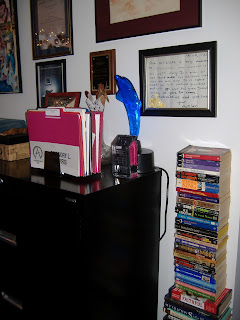 In forty-eight hours, I depart for a week-long adventure, most of which will be spent at World Horror Con with fellow scribes I adore and industry folk I'm eager to meet.  The Muse book party will be held next Friday night in the pair of rooms across from Saturday night's Stoker Awards venue -- pink champagne, sandwiches, and butter cream cake are on the order, along with a reading from the book (I am thinking of sharing the shortest story contained within the covers, "Veneer," which I wrote during my most recent visit to New York City).  I plan to work on several manuscripts while traveling and during down times at the con, including a novel, a novella, and a short story.  And when I come home, it will be to a clean, bright, and welcoming office where I'll pen my latest literary adventures as I wait for the next of 2012's real-time ones.
Posted by Gregory L. Norris at 1:04 PM