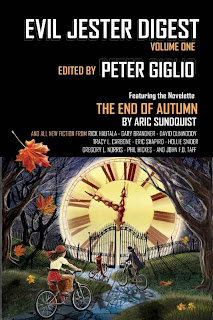 I have three wonderful events to report.  The first is that the digital version of my monstrous collection of stories long and short (blurbed by the magnificent Kate Mulgrew of Star Trek: Voyager fame), The Fierce and Unforgiving Muse: Twenty-Six Tales from the Terrifying Mind of Gregory L. Norris has been released and is available for purchase.  The second is that this little blog, begun in protest less than seven months ago but a forum that has grown very near to my heart, is a few clicks shy of notching its 10,000th read, for which I am both proud and humbled.  And the third, far from least, is the launch of Evil Jester Digest Volume One, in which editor Peter Giglio has gathered ten tales by the cream of the genre's crop, names that pop with recognition and others that demand to earn the reader's thirst for more.  My original short story, "Lone Wolf," is one of the ten stories contained within the gorgeous covers of EJD V.1, now on sale in e-book format (print book due within the next two weeks).
"Lone Wolf" came to me fairly in the order in which the story is presented, start to finish, in a vivid dream in December of 2010, perhaps the darkest month of my life.  It follows a group of civilian survivors shepharded by a soldier who attempt to survive a brutal new reality.  As horrific as the setting is, the story is really about finding hope and love in a loveless, hopeless time.  The longhand draft was written in a day; the story was accepted first time out at the anthology Zombiality 2, only to become available again after that project was cancelled in October of 2011.  I'm beyond thrilled to have it find such a great forever home!
My EJP Digest fellow scribes were kind enough to share with me the origins and anecdotes behind their brilliant stories.
Hollie Johani Snider on "Widdershins":  I originally wrote this story several years ago, after trying to get through HP Lovecraft's "At the Mountains of Madness," I still haven't finished reading that one yet, though I keep trying, and decided to try my hand at the Lovecraftian sub-genre.  Instead of the arctic though, I decided to go warmer. I put up a map of South America, pulled out a dart and let Fate hand me a location. Lo and behold, Peru ended up the target, but I knew I had to get the Sumerians and Babylonians in there because I am fascinated with those cultures. Thus, "Widdershins" was born. I'm thrilled it finally found a home too, after being rejected once, then accepted only to have the anthology canceled, then rejected again. I guess, for this orphan story, the fourth time's a charm.
Eric Shapiro on "Look Behind You":  I was playing with pure emotion, trying to go for a legitimate spooked-out feeling. Sometimes we writers get caught up in the language; my story was an attempt to bypass the words and go straight for the nerves.


Aric Sundquist on "The End of Autumn":  "The End of Autumn" was originally written as an exercise in language.  I wanted to write something with bold colors and surreal imagery, similar to the works of Neil Gaiman and Ray Bradbury.  This is what came out.  It is my first dark fantasy piece, and remains one of my personal favorites.

Tracy L. Carbone on "The Girl Who Drowned": About fourteen years ago, a local girl drowned in a pond. She stayed alive, albeit comatose, and her parents brought her home, hooked up to tubes. Suddenly there were reports of statues of Jesus and saints dripping oil. They may have dripped blood; I can't remember. The church was all over it and the parents built a viewing room in their home. A glass partition separated crowds of people who came to pray by this Miracle Girl, from the comatose child in the sterile white hospital bed. I had the fortune/misfortune of seeing her one day, and her image has been in my head ever since.

Gary Brandner on "Dust Devils":  Driving from Las Vegas to LA, I ran into a dust storm not quite as scary as in the story, but it sandblasted my car and imprinted itself in the Story Idea file of my memory bank.
Dave Dunwoody on "Sharpe is Extraordinary":  "Sharpe is Extraordinary," though a standalone tale, also serves as a follow-up to my novel Unbound and revisits my favorite character, Emil Sharpe. He's an inhuman being of strange origin who seems to be a magnet for other oddball characters - God, in the case of this story. The story's also about writing (sort of) and Slurpees (heavily) and I think it's found a perfect home in EDJ.
John F. D. Taff on "Dust at the Center of All Things":  For years, I wanted to do a mummy story, but didn't want to walk down the same path as the standard B-movie Egyptian mummy.  I've always loved the ancient Mayan/Incan/Aztec/Toltec/Olmec cultures, and saw a National Geographic piece on mummified children left as sacrifices high on mountains in South America.  That struck a spark in me, and the story came fairly easily.  Incidentally, I try to spend a lot of time on titles, because I think they're important to a story.  In my estimation, a title should point like an arrow toward the secret heart of the story.  The title of this piece is one of my favorites of all my titles.
Phil Hickes on "A Gentleman's Folly":  I’ve always been drawn to the foggy streets of late Victorian/Edwardian London, where beneath the veneer of gentility, one imagines a tenebrous warren of secret occult societies, obscure bookshops and sinister opium dens. This was my humble attempt at an homage to that era in both style and subject matter!
Rich Hautala on "GPS":  The genesis of GPS is easy to remember. I had helped a friend drive his household belongings from Maine to Florida ... We were driving using a GPS, driving along some highway in Georgia (or maybe South Carolina). The driver of the car in front of me did something stupid, and I immediately thought: "What if he has a GPS, too, and after he pulled his bonehead move, his GPS said: "You see that truck behind you? The driver thinks you're an asshole." ... It all came together after that.
Posted by Gregory L. Norris at 7:17 AM