The morning after the play -- the day of my big reading at Bluestockings Bookstore (I hoped it would be big!) -- dawned bright and brisk.  Dressing in a variation of the comfortable new designer threads I'd brought with me (jeans, Hilfiger shirt, Champion sneakers, which turned out being more comfortable then I'd imagined once they were walked in), I wandered to an all-night eatery next door to my hotel called Danny's and took an enormous breakfast and iced coffee to go. Following the difficult trip into the city and the debacle at the reception desk, I was somewhat exhausted and opted to dine in my room, once more in my very comfortable Perry Ellis blue flannel checked jammies.  After breakfast, I uncapped my fountain pen, opened to a fresh page in the full notebook of tear-out sheets I'd brought with me as a backup, and began to write the short ten-minute play "Chat" that's been haunting my card catalog of unwritten story ideas since Y2K.  "Chat" is set in that same year, and explores the politics of an old-school chat room where few, if any, of the attendees are really what they claim or who they appear to be.  I figured the timing to long last complete #62 from my list of unwritten ideas was perfect; though the play format isn't one I'm entirely comfortable with, I found the pages flying past and finished the longhand draft while seated in the hotel's lobby, waiting for my two fantastic New York City pals to arrive for dinner prior to the reading.

You couldn't hope to meet nicer -- or read better -- than David Bernstein.  I'd appeared with David in numerous short fiction anthologies previous to our first meeting in the flesh at November 2011's wonderful conference, Anthocon.  A few weeks prior, I'd enjoyed his unnerving lead story "From Under the Bed" in Blood Bound Books' Night Terrors collection. Since the conference, David has notched five book deals with such great presses as Samhain, Severed, and EJP.  So it was a real treat when he and his gorgeous gal-friend Sandy Shelonchik suggested we meet up for a nibble before the reading, which they planned to take in.
There's a loft over at Danny's, very comfortable seating, great food, so that's where we went.  While talking the writing life and enjoying our fare, numerous cartoon characters sauntered in, led by Smurfette.  Among the parade: Puss-in-Boots, Minnie Mouse, Hello Kitty, and Elmo from Sesame Street.  Seriously, you can't make this stuff up...nor did I when I tell you that Smurfette removed her white apron, flashing us her blue ta-tas.  She then also removed her head and she, it turns out, was really a he.  As our unintentional dinner theater commenced with even more cartoon guests arriving in ones and twos, it dawned on me that we weren't far from the flagship Toys-R-Us store in Times Square.  Mystery solved.  Retinal damage done, perhaps permanently.  Blue, I tell you.  They were blue.
We jumped into their car and David drove us into the East Village.  He found the best parking spot right across from the bookstore, and there we were.  Bluestockings is a fantastic venue, bright and energetic, perfumed by the delicious fair-trade coffee they serve, the sort of place I'd want to write and sip my Joe daily by the gallon if I lived in the neighborhood. There, I met our hostess, the formidable Kathleen Warnock, who edits for both John Wiley & Sons and Cleis Press and organizes many of the fine and fun readings around the city, including this annual event.  The place was already frenetic and filled with what I hoped would be the audience when we arrived -- they were, and continued to grow as chairs were set out and ever more floor space vanished.  By the time the first reader, the divine Sinclair Sexsmith took to the mic, there wasn't an empty seat in the bookstore.  Nor was there much room to navigate the aisles, which was just too cool.  Richard Labonte, one of my favorite editors and the man who had invited me to read at the event, would have been proud.  The place was packed! 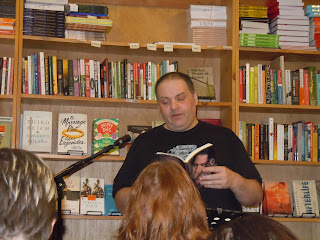 Going in alphabetical order according to author's last name, the crowd enjoyed the elegant, unapologetic offerings of seven breathtakingly brilliant authors.  When my turn came, my bio was read and one audience member remarked, "My God, we have a celebrity reader among us tonight!"
Dressed in my new favorite shirt, the one bearing an image of a typewriter that may be the best Christmas gift ever, I handed out the stunning promotional cards for Muse, opened my brandy-new copy of Best Gay Romance 2012, and read from my longish short story, "The Bachelors."  The response to my work was so positive, the applause that followed, too kind. I signed autographs, mingled with the audience, noticed a few Muse cards left behind on seats, and told myself they would make great free swag for the bookstore to insert in customers' bags the following day.  I and my two lovely pals sauntered out and returned to the heart of the city for dessert and coffee.  Later the night, I reluctantly bid them goodbye and walked back to the hotel, eager to put down more pages.  The reading inspired me to the Nth!
Friday morning, I was up super early, grabbed more breakfast and iced coffee from the all-nighter, ate it in my room, and worked on a novel chapter and a short story, eager to pack up and return home as soon as possible. While seated at the desk, I heard the doorknob tested not once but several times.  Finally, I got up and peered through the peephole at the very narrow corridor outside my hotel room, where, a cleaning woman in a pink and white housekeeping uniform moved up and down the hallway, waving her hands and chanting.  I had left the 'Do Not Disturb' tag on my door and gathered she was testing the lock, for whatever reason.  I also realized she was doing some sort of religious blessing, which struck me as so odd, so askew, that I knew it would appear in a story.  I didn't expect the story to materialize so quickly. Packed up, I checked out of the hotel, returned to the Port Authority, and waited for the first in a long string of buses to ferry me home to New Hampshire.  At the terminal and then on the ride back, I wrote most of "Veneer," a short story about that odd encounter (I would finish it the following day, camped out in my living room).  The ride north was arduous and unpleasant, but by 6:40 PM it was over, and I returned home, my series of adventures and misadventures to New York City concluded.
Posted by Gregory L. Norris at 6:50 AM