The Fierce and Unforgiving Muse 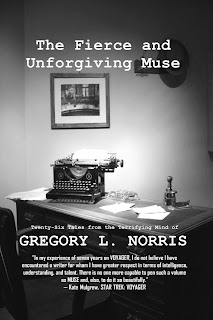 Once upon a time I, like many other writers, believed in the Big Bad Block.  Then, somewhere around May of 2006, into that very wonderful summer -- my first in eleven years in which I returned to my roots and wrote more fiction than nonfiction -- I realized that to believe in such a thing was to give it strength.  I turned my belief system toward the Muse, that mythical, wonderful taskmaster from Greek Mythology who inspires writers with a kiss.  Mine's more of a grabber, granted, and can be quite demanding, but since 2006, I've written to completion some 400 of my fictional efforts and sold quite a few of them.  Twenty-six never before published stories, short and long, will soon be available in The Fierce and Unforgiving Muse: Twenty-Six Tales from the Terrifying Mind of Gregory L. Norris, blurbed by the fabulous Kate Mulgrew, aka "Captain Janeway" from Star Trek: Voyager.

In Muse, readers will visit Ancient Abydos, Egypt and modern Midtown Manhattan; Rwanda in 1994 and London, England in the 1960s, where giant horrors prowl the back alleys, mostly unseen; Tora Bora, Afghanistan in 2001 following the height of American bombing and the Florida Everglades, just after World War II; the Carpathians during the Soviet push east to Berlin, and Boston in the not-too-distant-future after a global pandemic.  True terror is timeless.

Muse was assigned to me by Senior Editor Peter Giglio on a bright, humid late June Monday afternoon in 2011.  The original manuscript, then weighing a hefty and respectable 100,000 words, was turned in on November 3.  Within days, Mister Giglio suggested I go double, incorporating another thirteen tales.  The fiercer, final Muse is some 180,000-words thick.  My only editorial direction from the starting line to the finish was to make this collection a page-turner and to keep it terrifying.  I leave it in my readers' very capable hands to decide whether or not I have succeeded. Muse is available in late March and will get its debut at World Horror Con in Salt Lake City, where I and several luminous writers and readers will toast its arrival.

The Table of Contents:


From the Muse Foreword:
I grew up on a diet of creature double features and television science fiction, and some of my favorite afternoon matinees were chasing my blossoming imagination into the room at the back of the house after the lights were turned off. As a young boy camped in front of our big, boxy TV with its antennae of rabbit ears, I watched in both amazement and horror as denizens of the planet Luminos scooped up a sleeping neighborhood of unsuspecting everyday folk, transporting them for slave labor halfway across the cosmos in “A Feasibility Study,” an episode of the original The Outer Limits. I was terrified when the giant monster in the elegant black and white Godzilla strode out of the ocean and leveled the city of Tokyo, and when a shocked little girl wandering the White Sands desert screamed, “Them…Them!” And when Florence Tanner rolled back a length of cellar wall and discovered what she believed was the desiccated corpse of Daniel Belasco in The Legend of Hell House...
Posted by Gregory L. Norris at 12:21 PM