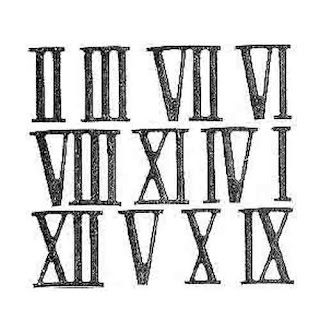 I've never been good at math.  I clearly remember that white-hot rush of panic in Third Grade Math Class when my homeroom teacher, Mister Hunt, called upon me to answer what 6 x 6 was. Somehow, I pulled '36' out of thin air, but for long moments after escaping public humiliation, my pulse galloped and cold sweat dripped and, I imagine, the smile on my young face was quite insane.

Still, some numbers matter to me, far more than royalty statements and contract minutia.  2011 ended on interesting and quite high notes, given the many outside factors that tried to distract me this past year.  In 2011, I wrote 72 individual fiction projects to completion -- a novel, numerous novellas, one screenplay, and quite a few short stories.  Those 72 added up to 278,820 words all totaled according to the tally in my organizer, where I keep track of my finished work.  I estimate another 50k easily in projects I started during the course of the last year but have yet to complete (a far shorter number, perhaps a dozen ideas throughout the past twelve months; since 2010, I've been writing to completion more times than not, taking far fewer interludes). 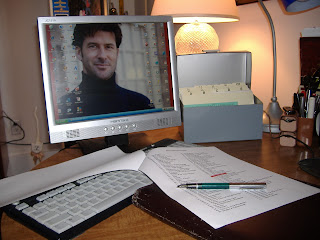 (My 2012 list of unwritten ideas, showing its first streak of editorial red signifying an as-yet-unwritten idea is now a drafted, completed story)
Going into 2012, the sheet I use to keep track of my ideas -- my portable idea box or manifest, if you will -- boasts a total of 134 individual novel ideas, novellas, short fiction, scripts and teleplay pilots.  My goal in 2012 is to put at least 54 of them to bed; I closed 2011 having written a grand total of 946 overall and 54 will bring me to a number that has loomed large since I was a teenager: 1,000 completed fiction projects.  This number manifested itself when I read about the amazing work done by one of my idols, Rod Serling.  Mister Serling penned some thousand short stories, film scripts, and teleplays, I remember reading, and that figure stuck with me.  So as I begin my 2012 adventures, it is with great anticipation that I hit that highest of high bullet points.  To celebrate, I have signed up to take a retreat on an island in September, when I plan on reaching that goal, which I have dreamed of for almost as long as I have been dreaming awake. 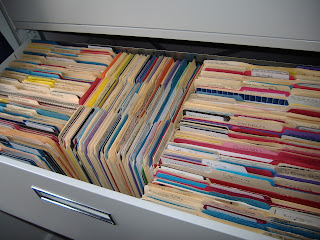 (Quite a few of the completed short stories, scripts, and novels that have built toward my Big 1,000)
Finally, a few numbers that I've also embraced in this early New Year:
On February 9, I will be reading at Bluestockings, a progressive bookstore and coffee bar in New York City's East Village as part of a Valentine's celebration.  From March 29-April 1, I'm off to Utah to enjoy the company of fellow writers and publishers at World Horror Con and to celebrate the launch of my enormo book of short and long fiction, The Fierce and Unforgiving Muse.  In July, I'm planning to head to Rhode Island to meet up with Peter Giglio and a bunch of awesome writers for Camp Necon -- the Northeast Writers Conference and, of course, Anthocon here in New Hampshire next November.
Back to that retreat I'm headed to in September and the Number 1,000.  My 100-mark stories have always been fan fiction, and for the 1,000th I plan to return one final time to a number that means more to me than any other: 1999.  Long last, while on the island for five days, I'm going to finish Metamorphosis, my half-completed Space:1999 novel, and get blissfully, happily lost in my final visit to Moonbase Alpha via my fountain pen.
Wishing great numbers for all in 2012!
Posted by Gregory L. Norris at 11:33 AM