Pick a Card, Any Card 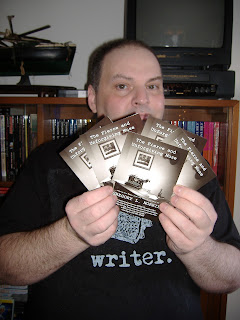 Growing up, our family routinely spent days and sometimes whole weeks at Salisbury Beach in Massachusetts.  In the area of the beach with rides, concession stands, and skee ball known as the Center, the one feature of the arcades that imprinted itself upon my imagination more than any other were those creepy fortune telling machines presided over by the top halves of turbaned mystics with names like Zoltan and Zoltar.

On Friday, the mailman delivered quite the lovely surprise -- a box of promotional postcards for my upcoming monstrous collection of original fiction both short and long, The Fierce and Unforgiving Muse: Twenty-Six Tales from the Terrifying Mind of Gregory L. Norris, complete with Star Trek: Voyager Captain Kate Mulgrew's wonderful cover blurb.  Muse contains stories of haunted swamps and Egyptian crypts, devil dolls and giant monsters, spiders and snakes and the deepest rooted of human fears -- past, present and future.  The book is getting its official release in late March and is being launched at World Horror Con in Salt Lake City, Utah, where I plan to be in attendance.  To get there, I have decided to take the train from Boston to Lincoln, Nebraska and enjoy a leisurely ride, writing the entire trip (it sounds so Alfred Hitchock and film noir!).  In Lincoln, I'll connect with good pal Peter Giglio, relax, dine, write, and then we'll head together to Utah for three days with fellow great writer friends and a celebration of my book's release and others (my short story "Lone Wolf" will also be getting its Red Carpet moment at WHC when Evil Jester Digest V. 1 is unleashed upon the public that weekend).

Before my big adventure at WHC, I'll be enjoying another, no less exciting few days in New York City in February.  As one of the authors invited to read at the annual Valentine's event held at Bluestockings Bookstore in the East Village, after committing I decided to make the most of my visit so that adventure also includes a trip to Parsons the New School for Design and Mood Fabrics -- home venues of one of my favorite obsessions, Project Runway.  In addition, I'm taking in the Broadway show Love, Loss, and What I Wore, playing at the Westside Theatre.  The reason?  This particular run with the revolving cast boasts none other than the stunning and fabulous Robin Strasser, "Dorian Lord" from my beloved, late One Life to Live.  The show's publicist graciously comped me a free pair of tickets (some $160.00 at the box office) following my offer of a review on this here bloggy.  Icing on the cake?  I get to interview Ms. Strasser to accompany.  Further icing?  I'll have some great writing friends in the audience at the Bluestockings reading, like Charles Day, David Bernstein, and his lovely girlfriend Sandy Shelonchik.

In July, I plan to enjoy Camp NECon in Rhode Island, a low-key conference for writers, pro and beginners, that I attended in 2008.  Of course in November I'll be back at Anthocon, which was spectacular that first time around.  And in between?

In September, I hope to realize another of those big goals I've been dreaming about for most of my life (like writing 100 fiction projects to completion over the course of one year, which I accomplished in 2010): putting "The End" to my 1,000th short story, novel, novella, or script.  That project, a Space:1999 novel called Metamorphosis, has sat half-completed in the filing cabinet drawer containing all my partial manuscripts (aka 'The Drawer of Shame") for far too long, and is the final 1999 original fan fiction I plan to write.  Number 1 was all about the courageous men and women of Moonbase Alpha; so, too, have I always dreamed Number 1,000 as being.  To see that it happens, I'm staying for five days at a retreat on Star Island off the New Hampshire coast where I'll be well fed, inspired by my surroundings, and kissed by the Muse.  One week later, I'm jetting to Los Angeles to attend the 2012 Space:1999 Convention, and where I plan to write the final pages of that book and celebrate a moment I've anticipated for more than three decades.

So far, 2012 has opened with a lot of hope, promise, and adventure.  And I didn't need Zoltan or Zoltar or a fortune cookie slip to motivate me, just my Muse and imagination.
Posted by Gregory L. Norris at 12:35 PM