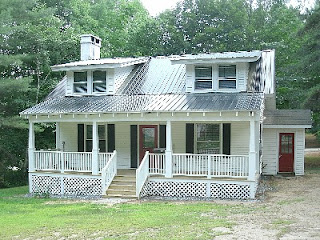 Next week at this time, I and nine of my favorite writers will depart for our autumn writers retreat.  We do this twice yearly, also in the spring.  The beautiful country house above is our newest venue -- the past two were held at a spa in the Berkshires that served exquisite gourmet food, but which suffered a serious bout of vandalism over the 2011 winter.  At this cozy and spacious new retreat destination, we will dine well, drink copious amounts of coffee, tea, and seltzer with lemon wedges, and be nothing other than writers for what promise to be several lovely and luxurious days.

In the summer of 1993, a young writer enjoying my first taste of publication in various small and semi-pro magazines but knowing I needed to push harder, by coincidence I learned of a local writers group.  Joining that group changed my life, in most ways for the better.  Three months later, I attended my first writing retreat, organized by one of the group's then-members.  I sensed the retreat weekend would be a turning point and turn, I hoped, in the right direction.  It would feature, according to the blue photocopied brochure (still in my filing cabinet), a mostly-vegetarian menu, apart from the shrimp stir fry and organic eggs at breakfast, blueberry pies made from berries picked on the property (a sprawling three-story passive solar log cabin set on 80-plus acres of mountaintop), salads, bagels, juice, coffee, and all the tea one could want.  A new best friend from the writers group, the brilliant Laura A. Van Vleet, joined me.  We drove north to Wentworth, New Hampshire on a brisk and bright October Friday, Halloween weekend. 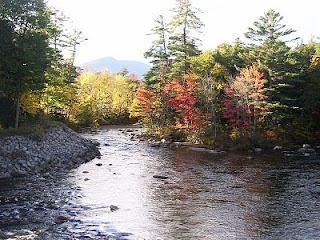 Just before we set out, the mailman made a rare early afternoon delivery.  At that time, when all correspondence came via Snail, I'd started believing that I was the last person to get their mail in the world, because I waited on the mailman to bring answers from the publishing industry, thus explaining why mine normally arrived around five o'clock.  The mail that day was stacked with an abundance of good news: one letter informing that I had won a prestigious small press award -- the now-defunct SPWAO's "Year's Best New Writer" nod (I didn't kill the Small Press Writers' & Artists' Organization, but that year I beat out some fairly impressive writers for the certificate, which sits framed in a spot of honor in my beloved Writing Room); a request for my first book-length work of fiction (Ghost Kisses -- Winston Leyland, who told me he purchased only one of 500 books submitted his way, would take it the following February); and a first sale to a professional magazine, a nifty check for $100.00 enclosed with an acceptance letter stating that every time the editors of Drummer tried to reject the story, they were unable to, and decided they should just go ahead and buy the damn manuscript.

Leading up to the retreat, I had determined that I was either going to give up on this 'writing thing' or dive in without fear and be a writer and only a writer.  The mail delivery seemed a clear sign of the right path, and that retreat turned out being the last major course correction I made -- and the last time I questioned what I wanted to do with my life.  The writer won out.  I returned home and restructured my world and, despite past threats in those early years by various wolves at the door like famine and homelessness and doubt, I have been writing full-time and publishing regularly since.  That weekend defined my life.  Maybe even saved it.

At that retreat, Laura and I wrote in front of a roaring wood fire, in comfortable Queen Anne chairs arranged before the hearth.  I sipped Earl Grey tea for the first time that weekend and have loved it since.  We ran through new copies of The Writer's Market and LMP (one of my notebooks still bears notes on leads I took from those books).  It snowed that Halloween weekend in the mountains, and we all took a walk after dark to the mountain's edge.  On my first night in a strange bed, I had a horrific dream and wrote it out as a short story, which was later published (in effect paying for part of the retreat...something I've done at the numerous retreats that have since followed: writing stories for various of my regular editors, thus paying for the retreat and then some on top of it).

I returned to Wentworth Mountain two more times; a house in Williamstown, Massachusetts for a dozen weeks all told from 1998 - 2001; and have been a fixture twice a year, autumn and spring, with my new writers group for a few years now.  As we ready to depart for this fresh adventure up north, my eyes keep wandering toward my award, the first of several I've won since, and thoughts of that original time.  In retrospect, that weekend may be the most important time of my life, but the best of all the lessons I learned there was to create a similar environment in my own home, so that every day could be a writers retreat. 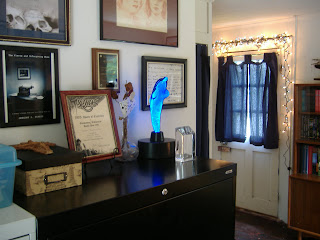