After forty-one years on the air, the once-formidable daytime drama, All My Children, will take a lamentable interlude.  Friday, September 23, marks the end of an era, as Erika Kane, Adam Chandler, Tad Martin, et al, bid farewell to fictional Pine Valley, some perhaps forever.  In March 2011, ABC's shortsighted and murderous head of daytime programming dropped an ax on AMC and sister soap, the always-engaging One Life to Live, both created by legendary scribe Agnes Nixon.  On July 7, clearly listening to the outcries (and the crying from so many loyal viewers whose opinions and passion went otherwise unheard for a medium in jeopardy since a white Bronco sped down a Los Angeles freeway and cheap celeb-u-tard reality programming became the staple of too many TV hours), the fine folk at Prospect Park announced they would launch an entire new network -- online -- and continue both soaps starting in January 2012.  While not all of the familiar faces from Pine Valley and Llanview, PA will make the transition, Prospect Park has promised to keep the quality and majority of casts intact.  Anyone who's seen the prod. co's movie Unstoppable can take heart that they'll deliver!

I grew up with All My Children and One Life to Live, my mother, grandmothers, and aunts addicted to the exploits of then-mercurial Erika (played by the gorgeous Susan Lucci) and the characters in her exciting make-believe world.  Phone lines lit daily to discuss the soap's outrageous and groundbreaking plots.  I knew all about Phoebe Tyler's meddling (the town's blue-blooded busybody, portrayed brilliantly by Citizen Kane's Ruth Warrick), but until 1983, when I began to write for longer and longer spells following my escape from high school, the information and experiences came second-hand.  In the autumn of '83, buoyed by the return of Genie Francis to General Hospital, I started watching the ABC soaps casually while my fountain pen dragged across the pages of a paranormal romance novel begun three months earlier.  Within weeks, I was addicted -- not just to GH but also OLTL, AMC, and the three half-hour soaps preceding: Loving, Ryan's Hope, and The Edge of Night.  I watched.  I wrote.

In 1993, with some serious publication credits now on my resume, through bizarre circumstances I met with an actor hired for under-five lines on Loving.  He invited me to join him in New York City at the ABC daytime studios where Loving was shot, snuggled up against the All My Children studios at 320 West 66th Street.  Within seconds of walking to the studios, I crossed paths on the sidewalk with Walt Willey, long-suffering "Jackson Montgomery" on AMC and, though clearly star struck (this was the first time I'd left my tiny corner of New Hampshire, but also the start of my entrance to a much-larger world and the regular rubbing of elbows with celebrities), I mentioned that I was a writer.  A published one.  I showed Willey the latest issue of Deathrealm Magazine, which bore my byline.  Willey poured through the contrib copies I'd brought along, at one point proclaiming: "I love that vampire sh*t!"  I felt like a million bucks! 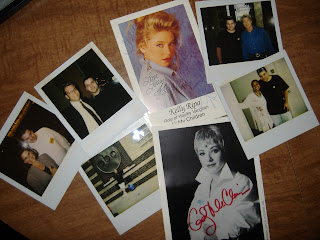 Over the course of numerous return set visits to both Loving and All My Children, I met and interacted with the casts: at the drinks machine in the cafeteria that linked both shows' studios, I encountered a pre-Buffy Sarah Michelle Gellar, starring as Erika Kane's troubled daughter Kendall (the story described in the foreword of my book The Q Guide to Buffy the Vampire Slayer); when Ruth Warrick guest-starred on Loving the same day as one of my set visits and tripped over a cable in the pitch-dark cavern of the main studio, I caught her; Debbi Morgan, whose "Angie Hubbard" had been a fixture during my afternoon writing sessions for a decade-plus, was generous with her time, and delightful to meet, as was the late, great "Palmer Cortland", actor James Mitchell.  I had a lovely conversation with a then fresh-faced Kelly Ripa in the AMC hair and makeup room.  On another approach to 320 West 66th during several assignments writing for Soap Opera Update Magazine, I spied a long black limo pulling up to the curb, and a lovely La Lucci hopped out.  Seeing the First Lady of Daytime was, I remember, like the arrival of Halley's Comet.  Rare, elegant, unforgettable. 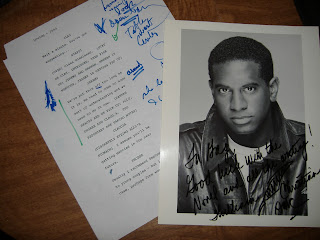 (Page of script from Jean LeClerc (Jeremy Hunter, both AMC and Loving), with his notes -- featuring the crossover of Ruth Warrick's Phoebe); autograph from the talented William Christian, aka Police Detective Derek Frye)

My favorite memory of that time came in the summer of 1994, when I met Ms. Nixon, that stellar scribe who had created and written AMC, OLTL, and Loving (plus it's short-lived spinoff, The City).  In the hair and makeup room, Ms. Nixon and I talked writing, characters, creativity.  I will never forget the surge of passion and energy I experienced.  The photo of the two of us (with actor Christopher Lawford) sits in the catch-all on my desk, a daily reminder of where I've been and why I write, and a source of continued inspiration. 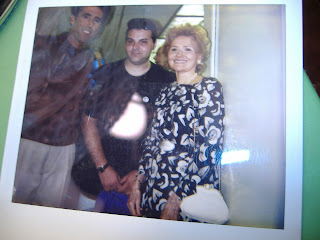 (Me, center, between Christopher Lawford and Agnes Nixon)

On Monday, September 26, ABC will unveil The Spew -- their cheaper to produce, flaccid food-and-blab replacement for forty-one years of great storytelling.  I won't be watching, and am fairly sure that the record books will view the decision to cancel AMC as one of the greatest screw-ups in the history of television.  I will, however, log on to Prospect Park's new online broadcast channel in January, where the romance and exciting goings-on in Pine Valley will again pick up for a new generation of viewers bored and disgusted with what now passes on the tube for entertainment.  All My Children premiered in 1970 with bold and original storylines, and a fresh take on an established genre, so leaping from the idiot box to the Internet seems only fitting, the next great chapter in a tale that will get its happy-for-now ending in the not-too-distant future.
Posted by Gregory L. Norris at 7:41 AM

Email ThisBlogThis!Share to TwitterShare to FacebookShare to Pinterest
Labels: Agnes Nixon, All My Children, Gregory L. Norris, One Life to Live, Susan Lucci