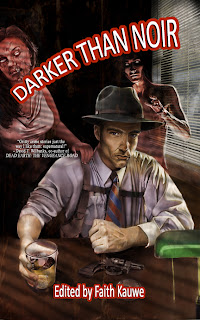 The highly-anticipated detective-horror story anthology by editress Faith Kauwe and the inspired powers-that-be at Grand Mal Press is now pounding the pavement.  Darker Than Noir features tales of gumshoes, MacGuffins, ghosts, and ghouls and is impossible to put down once started -- a bit of Mike Hammer (Darren McGavin, pre-Night Stalker please) meets Kolchak: The Night Stalker (the one and only, not that ridiculous ABC remake).  DTN features nineteen killer tales, including one by Zoot Campbell with perhaps the bawdiest title I've ever read, and mine with perhaps the longest title of anything I've created, "Wine and Spirits:  A Tale of Substance Abuse and the Supernatural."

I wrote the longhand draft of "Wine and Spirits" while seated on a cozy sofa, beneath my headphones, listening to the Twin Peaks soundtrack at one of my writer group weekend retreats to North Conway, New Hampshire, where the Muse was snogged repeatedly, and where many projects were completed and much prime rib and butter-braised asparagus was consumed.  Quite a few of us, eleven in all, will soon depart for our new retreat house (the old keeps getting booked up through the autumn, no wonder there as it's a fabulous place), where I hope many more stories will earn their The Ends -- and more incredible meals with talented fellow writers will be enjoyed.

This is the second GMP release I've been featured in -- my story "The Nest" appeared in their previous page-turner, Alien Aberrations, edited by Stephen R. Pastore.  Recently, the amazing Ryan Thomas, an editor I've had the joy of working with on other projects through other presses who's now part of the Grand Mal team, invited me to write a novella for a forthcoming collection featuring longer stories by five hand-selected authors.  My supernatural offering of revenge and redemption, "The Mushrooms", will appear in that release.  Also, at Ryan's urging, I'm working on a novel for submission to GMP, who are proving themselves a formidable press to be respected.

Check back to read my interview with Ryan Thomas about GMP, his band The Buzzbombs, and what he'll be looking for in both novel and anthology submissions in the near future.  Until next time, keep creating!
Posted by Gregory L. Norris at 5:47 AM

Email ThisBlogThis!Share to TwitterShare to FacebookShare to Pinterest
Labels: Darker Than Noir, Kolchak: The Night Stalker, Ryan Thomas, the Buzzbombs