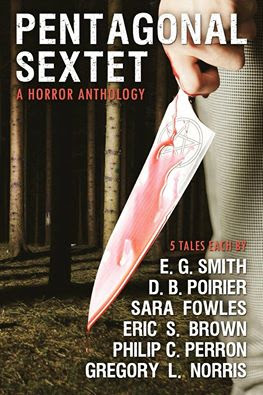 At the end of March, as I readied to depart for a four-day stay at the luxury retreat center When Words Count, I received one of those rare and wonderful invitations asking me to submit not one but five short stories for a project by the fine folks at Great Old Ones Publishing. GOOP have been wonderful to write and edit for -- I've been involved with numerous of their quality publications, including their Mummy anthology, Bugs: Tales That Creep, Slither, and Crawl, and my beloved Tales From the Robot Graveyard. And what writer would say no to such a fabulous invitation -- to be part of a release meant to showcase some of the publisher's most celebrated writers? I wouldn't have long to be part of Pentagonal Sextet, about one month to gather up and submit my five tales. On my way out the door to Vermont and WWC, I stuffed two additional note cards with new story ideas jotted on them in with fresh folders and blank lined paper, and figured I'd heap them onto the pile of what I already planned to write while camped out in the Gertrude Stein Salon and my accommodations up in the Hemingway Suite.

My first afternoon at WWC, one of my proposed stories, "The Right to Drive" (about a near-future society where motorists no longer drive alone within the confines of their vehicles) got dashed off in longhand draft almost to completion before our chef appeared in the salon with appetizers. The story seemed perfect for what I was hoping to accomplish -- a sort of mini-collection, a kind of greatest hits, in which none of the stories were remotely like their siblings in terms of theme, sub-genre, or characters. By the end of the retreat (in addition to completing a murder mystery geared toward the annual Al Blanchard contest -- I didn't win, but placed in the top five on two of the judges' finalist's lists!), I had my second story drafted. Pentagonal Sextet contains the aforementioned techno-horror tale, one about giant monsters straight out of a nightmare, one about ancient evils and the monster hunters who pursue them, one about a haunted house, and, finally, 'Fiddleheads', about malevolent horrors from the deep woods. Pentagonal, featuring five stories each by six Great Old Ones writers, boasts one of the sharpest, most unforgettable covers ever. Many of my talented fellow authors shared the back-story behind their contributions to the project.

Sara Fowles: "I spend my days, as most writers do, taking ordinary moments and asking myself 'what if?' in order to transform them into something more fitting to an alternate reality. All of my narratives come directly from imagining these alternative scenarios. What if, for instance, demons were interested in stealing faces, not souls, and what if they shopped for them in the grocery store? What if I took a nap at work and when I woke up, the office had been transformed into a giant, bizarre corn maze from which I couldn’t escape? These are the two specific thoughts that ultimately became the stories 'Banana Man' and 'Corn Maze,' respectively. They occurred to me within the most banal of settings, yet the posited fictional realities presented provided me with endless entertainment and a few bouts of insomnia, as I found myself caught somewhere between the realms of dreams and reality. I have tried my best to replicate this effect via the stories I penned."

Eric S. Brown: "It was an honor to be asked to be a part of this anthology. I had been longing for a chance to write some short fiction again and this was the perfect chance to do so. My time had been being spent mostly with giant monster fiction (aka- my newer books: Kraken, Kraken Island, and Kraken vs. Megalodon). The tales in the book from me are all wildly random horror scenarios that came to me after I got invited to be in the book. They range from an end of the world Kaiju story to straight up ‘military horror’. I had a great deal of fun writing them."

Philip C. Perron: "Pentagonal Sextet is just a splendid book.  For my part, I love writing about the brooding and the melancholy and so, not too oddly, four of my five tales are like that. But also I noticed something else, that two of them became something different.  The story ‘The Fields of Salvation’ is about an Asian woman who has the genetic difference of albinism.  I thought about what would make someone stand out and therefore attract unnecessary attention.  As Asian folk go, hair and eye diversity is completely different than Caucasians.  So being an individual with albinism would most certainly look exotic, and in some cases would bring unwanted attention.  For the tale ‘Dolly, Do I Have a Soul?’, I chose to base the tale in the not so distant future where the lead woman is actually a clone of her own mother.  But more interestingly, its a world where cloning, at least in the states, is frowned upon.  So unfortunately for her, she has become a target of both progressives and conservatives since one side is against science gone amuck while the other may hold more traditional religious beliefs.  Honestly, there was no intention, but both tales when I re-read them for inclusion in this collection, surprised me in how they were both in ways an allegory for the LGBT community and how being a bit different can sometimes bring unwanted attention.  And both tales show two sides of a coin: the struggle of not hiding one’s identity while in the other, hiding one’s identity.  ‘The Fields of Salvation’ is about a young recently married woman who just happens to have the condition of albinism that she can't hide from, while in ‘Dolly, Do I Have a Soul?’, the woman is intentionally hiding from her own identity (that of a clone) so she can just live a normal life away from being judged.  I hope folks who read my stories take something with them after they put the book down, even if my intentions were only to just write five fabulous little tales of the weird."

E.G. Smith: "With ‘The Stick Devils’, I set out to write a story both longer and more action-packed than my previous work, with multiple frantic action scenes separated by reflective lulls . The Pacific Northwest setting is common in my writing, as is the man-against-nature theme and the eager toady versus know-it-all leader character conflict. The greatest challenge of this story was researching illicit pot growing to ensure that the dialog was accurate and the plot plausible. (And like any horror writer, I hope that the FBI, DEA or any other three letters don't look into my browser history. ‘I was just doing research for a story, officer.’)  It turns out that marijuana plants are oily and highly flammable, which helped drive the story's fiery climax. While I must give a nod to Joe Lansdale's Bubba Ho-Tep for the improvised flame thrower idea, I think that my story might be the first one with a hero running around with a stick through his neck while high on smoke from a burning pot farm."