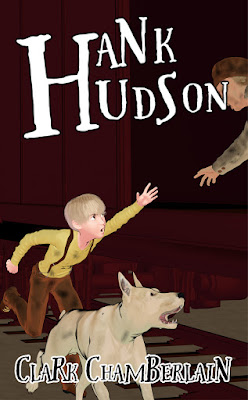 I'm convinced that books are filled with powerful magic. Some terrify. Others inspire with romance, introspection, courage. The most magical have the ability to transport us back through time from adulthood to the days when we were children and the world was a vast, wondrous place fraught with mystery, danger, and adventure. One such book is Clark Chamberlain's newest page-turner, Hank Hudson, the story of a young boy growing up in Depression-era America who accidentally gets left behind when his family moves cross country to California. On his long journey to reunite with them, Hank and his loyal companion Dog encounter oddities, get involved in a treasure hunt, and face off against a dark power eager to possess the boy.

I first met the man behind the magic of Hank Hudson after my short story submission to his publishing company's dystopian anthology, A Bleak New World, was accepted. Since becoming one of Raven International Publishing's authors, it has been my pleasure to get to know Clark and his work. Clark wears many hats ("Writer, Illustrator, Publisher, Father, and part-time Good Guy," according to his upbeat daily podcast, a must-listen to for any writer seeking inspiration) -- he helms the excellent The Book Editor Show with fellow scribe Peter Turley, and teaches a course with perhaps the best title in the history of writing seminars: Punch Them in the Gut: Writing Fiction With Emotional Impact. Meet one of my favorite writers and friends, Clark Chamberlain.


I’m always fascinated over where a writer’s ideas originate. What sparked Hank Hudson?
Hank Hudson really came from three things. First, my childhood was anything but normal. Often times I’d find myself living with relatives while my parents were between houses. And of course when you’re a kid being exposed to different and even odd families it shapes you. So I had always thought of a story about a boy living like a gypsy, traveling from town to town always getting into new adventures. Second, I have a brother-in-law, Cameron (the book is dedicated to him), and in all the home movies of him as a kid he’s often in the background, sometimes people telling him to get out of the way so they can record the cute kids. I thought wouldn’t that be interesting that if middle children weren’t just forgotten about because of the number of kids but if a middle child actually turned invisible on accident.Third, I like that spark of excitement that comes from the unknown. That feeling there really is this secret history and that the life we find so normal is just a shell concealing the real world in the background.

You’re working on a sequel, correct? Please share with us the broader Hank Hudson mythos.
As Hank sets off to catch up with his parents in the first book, he has no idea he’s part of a bigger world. A secret world. So in the second book we get to explore that deeper and he gets to learn what this world is really about. We have the ley line energy that grants certain powers and Hank can absorb those powers for limited amount of time. He needs to learn how to use them if he has any chance of standing up to the dark monster, the Apep, which wants to use Hank as a vessel so it can have a physical body again. In Hank Hudson and the Anubis, we get more secret history. Why did Roosevelt create the New Deal? In order to hide away the fact that the US is trying to control this energy and the Apeps that were released in the Great War. It really is so much fun to build a world like this. And the farther along the path Hank walks the more questions come along. Like how can he talk with dogs. Why his friend Stin doesn’t seem to age, sweat, and always can produce things from his pockets. At the center of this story it’s about friendship, family and the desire we all have to be accepted and loved.

Talk about your previous writing work -- Another Day Another Name, for instance.
Another Day Another Name was an exercise in understanding more about myself. I wrote it while in Iraq, serving with the US army. It was my go to place to unwind and put down the questions I had, that I really didn’t feel I could talk about with others. It was also a fun place to play what-if. When I first arrived at the US base in Baghdad, I thought there would only be US soldiers. There weren’t. In fact we were outnumbered by contracted security five to one. So that question came to my mind what if the government privatized security in the US? It made a great backdrop for greed and corruption to tell the story of four very different people. Each one of them, Henry, Mabel, Mateo and Steven are neither right nor wrong. The world they live in and what they do is very grey, like the real world. I liked that. The sequel to that, Another Day Another Deception, has been put on hold while I was writing the Hank Hudson books, but I promise that I’ll get back to it soon! And if you thought the first book was intense, you ain’t seen yet. I also enjoy writing comics and telling stories visually. I like playing in the world of Smugglers Inc, my sci-fi comic, and in my son Jonah’s Monster Prison (which we hope to have a few issues out in the first quarter of 2016). I love storytelling. The power it has to shape lives and the way it can connect us together. I’ve seen some bad things in the world and a lot of it comes from seeing “others.” We see the differences and make choices out of fear. Good story can show us the other side. It can help us to understand that we are the same.

You knew you were a writer when…
A year after coming back from Iraq. I understood that this was my calling, the place I fit into the world. It let me use my best talents to the fullest of my ability. When I felt that connection to writing and storytelling things started to click in my life.

What's up next for Raven International Publishing?
There are four big projects in the works, Peter and I are building an editing course. Moving forward on a marketing program for authors. And I'll be announcing an open submission for a middle grade book. We've got a superhero anthology due out next year. I need to have better infrastructure before moving into another anthology. I'll be bringing on a couple of interns as well and hope to find someone to move into a full time position.

Finally, Clark's son Jonah has a chance to go on the American Heritage Tour. To help raise funds, for a $15.00 donation, Clark will send you a copy of Hank Hudson. The link is posted below: https://www.youcaring.com/jonah-clark-454829/update/385334